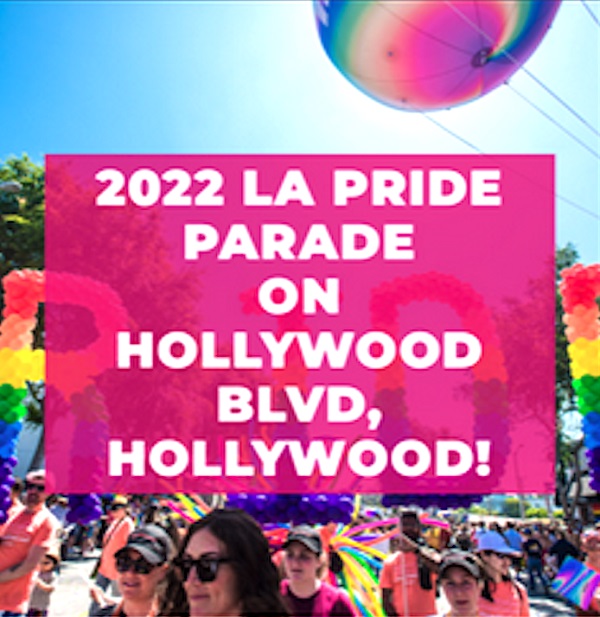 L.A. PRIDE returns to Hollywood and downtown Los Angeles this weekend of June 11 and June 12. This is the original Christopher West PRIDE Parade that returns to its original location down Hollywood Boulevard for the first time in decades.

Those of you who are old enough to remember the original LGBTQ Pride Parade in 1970 know well how much the world and attitudes have changed. This year’s 2022 L.A. PRIDE PARADE begins on Sunday, June 12, at 10:30 AM, stepping off at Hollywood Boulevard & Cahuenga, heading to Highland Avenue, then south on Highland to Sunset Boulevard, before turning east on Sunset and back to Cahuenga. The parade comes back to Hollywood Blvd. with over 130 parade floats, marchers, trucks, exotic cars, twirlers, performers and more, marching in style as only the LGBTQ community of LA and its allies can! 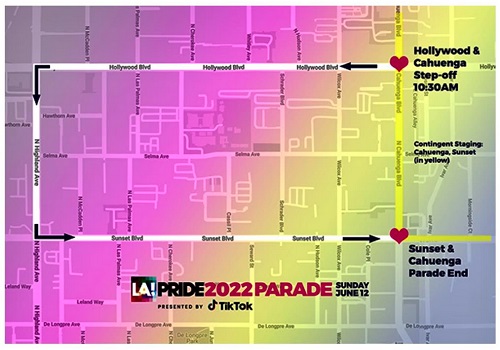 Community Grand Marshal: SIR LADY JAVA. As a popular LA nightclub star in the 1960s, Java was targeted by LAPD for violating “Rule Number 9,” a ban on “impersonation by means of costume or dress a person of the opposite sex.” Java challenged the law, and with some help from the ACLU, she won in court: Rule Number 9 was struck down. Java is a trailblazer and legend, and we celebrate this living pioneer of LGBTQ rights.

This year’s theme is #LoveYourPride, and we invite you to do it with thousands of your closest friends in a spirit of unity, joy, and fabulousness! After all, that’s what Pride is all about! Here is a map of the PRIDE PARADE route. There will be street closure between 4 AM and 4 PM. 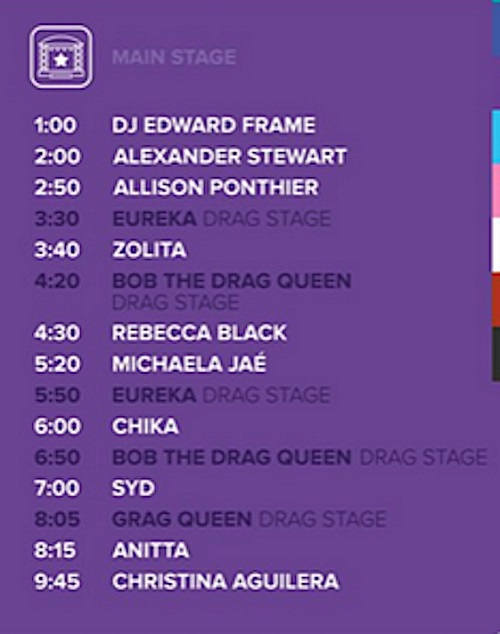 Be sure to arrive early to get a great spot along the parade route. Parking in Hollywood can be tough, so please consider using convenient public transportation – the Hollywood/Highland station is best – or use rideshare.

After the parade, head over to Pride Village on Hollywood Blvd. between Cahuenga & Vine, and a beverage garden on Cosmo between Hollywood & Selma. Pride Village is a new neighborhood festival organized by The Hollywood Partnership in collaboration with LA Pride.

Sponsor tents will be on the section of Hollywood between Ivar and Vine, near the Ferris wheel, community stage and vendor booths. That’s right! We said Ferris wheel! Learn more by checking out this Hollywood Pride Guide. 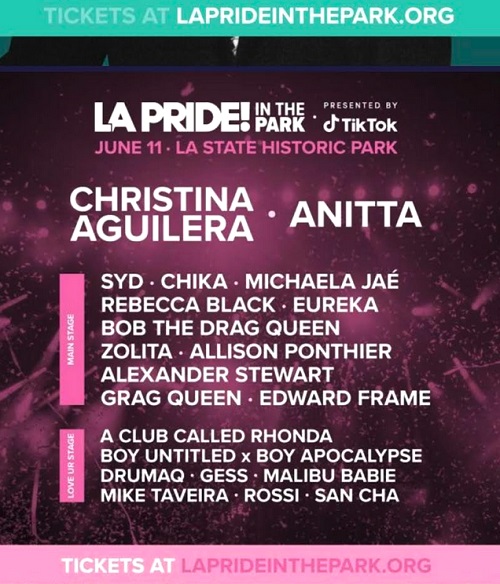 The first L.A. Pride Parade (originally Gay Pride Parade), organized by Rev. Bob Humphries (founder, United States Mission), Morris Kight (founder, Gay Liberation Front) and Rev. Troy Perry (founder, Metropolitan Community Church) and the Christopher Street West Association, was held on June 28, 1970 in Los Angeles. The parade started at the corner of Hollywood Boulevard and McCadden Place in Hollywood and ran along Hollywood Boulevard in front of an estimated 50,000 spectators. The Los Angeles parade was held simultaneously with events in New York, Chicago and San Francisco to commemorate the Stonewall Uprising in New York that had occurred a year earlier. However, unlike the events in other cities that were simply marches and rallies, the L.A. event was an officially-permitted parade. 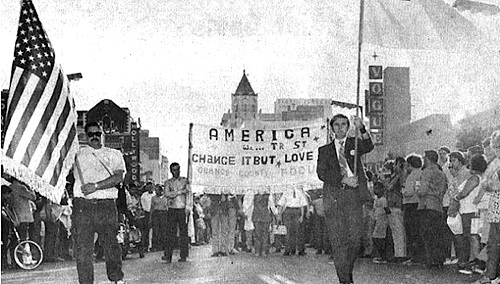 L.A.’s Gay Pride Parade permit did not come easily. No city had, until that time, ever experienced thousands of LGBTQ people marching openly and LAPD Chief Edward Davis did not hesitate to remind organizers that homosexuality was still illegal in California. Rev. Perry recounted that Davis declared to them, “As far as I’m concerned, granting a permit to a group of homosexuals to parade down Hollywood Boulevard would be the same as giving a permit to a group of thieves and robbers.”

On Saturday, June 11, and Sunday, June 12, L.A. Pride in the Park, is happening with music, festival-style activities, exhibitors, and 2 two performance stages.  LA Pride in the Park is at LA State Historic Park, 1245 N Spring St, Los Angeles, CA 90012. Parking is extremely limited. Use ride sharing or take the Metro L Line (Gold) from Union Station one stop to Chinatown. The line-up of performers includes Anitta, Syd, Chika, Golden Globe-winner Michaela Jaé, (formerly MJ Rodriguez,) and our headliner – Christina Aguilera. Tik-Tok is a major sponsor and will be screening the music venues through the two days. You can see Christina Aguilera on stage on Saturday night at 9:45 PM.

Here is the schedule of performers on the main stage on Saturday, June 11: