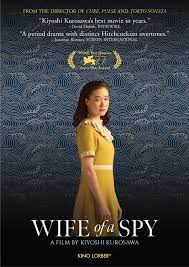 Los Angeles, CA (The Hollywood Times) 9/23/21 – Tomorrow, “Wife of a Spy” opens up in theaters in Los Angeles at Laemmle Royal.  I was fortunate enough to catch a sneak preview of this Venice Film Festival winner for Best Director, Silver Lion. Kino Lorber is giving this a US theatrical release and it is well deserved. Kiyoshi Kurosawa is well known and respected for movies such as Cure, Pulse, and Tokyo Sonata, showing incredible versatility between the horror/thriller and drama genres.

This is Kurosawa’s first attempt at a period piece, where the story is set during World War 2 in 1940, right before Japan’s ramp-up to conquer Asia. It tests the bond of marriage, in a backdrop of war, nationalism, treason, and cross-cultural issues, which were all tackled in this film.

The cinematography is absolutely breathtaking. It is shot in 8K and the clarity and crispness take you on a time machine back to 1940. Kurosawa shows off his talent with chilling Hitchcockian shots in a variety of settings from perfectly set-dressed office spaces, to rural country shots to a powerful ending scene by the ocean. Attention to detail on making everything in line with 1940 must have been a gargantuan task but was flawlessly executed.

The story arc itself is good, in theory, but the pacing was slow to start and it picked up towards the second hour. The wife of a successful merchant, Satoko (played by the talented Yu Aoi) goes through a journey from formerly trusting wife, to having to question her husband, who is going through a journey of his own, questioning his government after seeing horrific things in Manchuria, which Japan controlled at the time. The questions of nationalism are overarching, as husband Yusaku (played by Issey Takahashi), is now targeted as a spy because of his love for American culture, which was taboo at the time of this movie.  This would cause people like childhood friends of his wife and his own nephew, Fumio, to drop the seed of doubts into the mind of his wife and threaten that bond and marriage.

What I found most fascinating was the question of trust. Everyone around Satoko is basically badmouthing her husband and creating doubts in her mind, even alluding to infidelity.  Satoko plays the confused but assertive wife, never falling into the victim role, displaying strength in character and resolve that only a seasoned actress could convey. Her love for her own country is also put to the test, as her husband, an amateur filmmaker, uncovers footage that puts her own nationalism to question.

There was a quote in the movie, “you have to trust me. I’ll be the only one you have left”. At a key moment, the emotions hit a boiling point and show Satoko and Yusaku understanding the bond they have and how that trust needed to be rebuilt. Ultimately, decisions made after this scene make you wonder if that bond was a two-way street.

My only minor complaint is how little we get to see Yusaku’s devotion to Satoko. It seemed one-sided, maybe by design, but I felt the movie focused too much on Satoko and what went through her head, versus adding more events and focus on Yusaku’s character, which would have moved the movie along. If it had shown an equal balance of what the husband went through, the ending may have felt less unfinished and ambiguous, and instead more clear and focused.

Overall, it was a movie that showcased Kurosawa’s directorial talents and a good 2-hour escape into the world of Kobe in 1940 and a treat for those who love the intricacies of filmmaking. However, aside from a few key moments, the movie is more of a slow burn than an actual “thriller” as it is being billed.