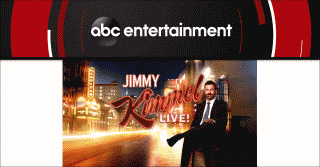 “Jimmy Kimmel Live!” airs every weeknight at 11:35 p.m. EDT and features a diverse lineup of guests that includes celebrities, athletes, musical acts, comedians and human-interest subjects, along with comedy bits and a house band.

Following are the episodes scheduled to air the week of Sept. 23–27 (subject to change):

Enjoy “Jimmy Kimmel Live!” on the web at www.abc.go.com and at youtube/JimmyKimmelLive.