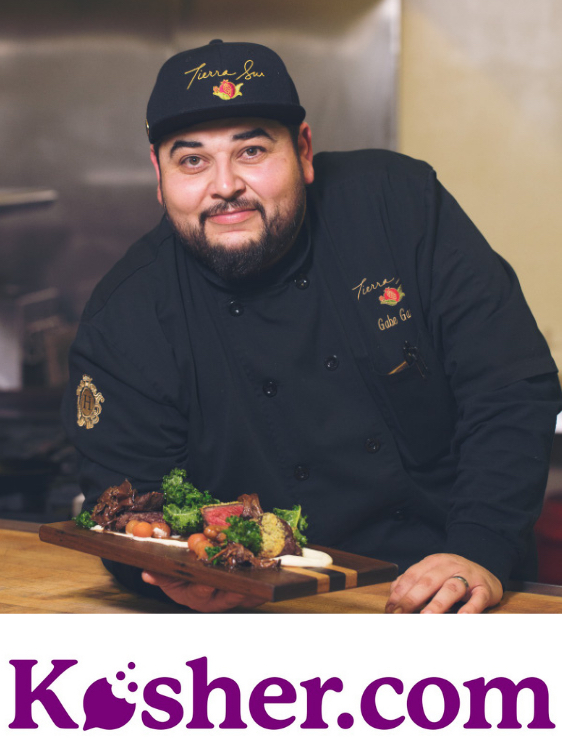 By Debra Wallace
Los Angeles, CA (The Hollywood Times) 12/17/21 –
Kosher.com is expanding its reach by developing new shows this season. Tell us about your newest shows.

As a media platform, Kosher.com has reached millions with content dedicated to kosher food and the kosher lifestyle.  Our goal with our newest shows is to expand both our reach and our representation by showcasing different kinds of kosher culinary traditions in our newest show, Breaking Bread starring Danielle Renov @peaslovencarrots.

Another show we have launched, The Rosh Chodesh Club, celebrates the course of the Jewish year by dropping a show at the start of each Jewish month, called Rosh Chodesh, which literally means the “head of the month. Hosted by the internationally acclaimed Chef Gabe Garcia of Tierra Sur, members of the Roch Chodesh Club will be treated to a monthly stream where you’ll be cooking along with Chef Gabe. No cutting down an hour-long recipe to five minutes. He’ll walk you step-by-step through the entire recipe, from prep to plating.
Why do people come to Kosher.com?
With over 10,000 recipes and 800 show episodes, along with great lifestyle content that is relevant to kosher living, kosher.com is the premier site to visit when looking for kosher recipes or entertainment.  Our recipes span from basic, get through the weekly dinner ideas, to more adventurous recipes created by our network of a world-renowned recipe developer and social media influencers.  Our new app has a recipe upload feature that allows you to take all your scattered, recipes handwritten on a napkin from all over your kitchen and keep them all in one place. Not only that, but you can share any recipe, whether yours or a kosher.com original with your friends and family with a touch of a bottom — the future of recipe sharing is here!
What is it like working with Chef Gabe? Why is this a perfect partnership?
Chef Gabe knows kosher just as much as he knows fine dining. He has been creating culinary masterpieces at the world-famous and kosher Tierra Sur restaurant in Oxnard, California. We love his passion for cooking, his energy, and the joy he gets out of not only cooking but teaching his viewers how to recreate restaurant-worthy dishes in their own homes.
Tell us about the new show Breaking Bread with Danielle Renov. How much fun will viewers have on this tasty food tour?
I believe that Danielle’s journey is so very important to see.  She is not only cooking alongside others from other culinary and ethnic backgrounds, she is having conversations about why their tradition is so important to them and learning from each other in the process.
There are six episodes including one that features Rudy Roschmann, a beloved young Jewish community activist. Tell us more.
Episode 1- Breaking Bread with Danielle Renov- is the show introduction on Danielle and her travels and interviews to set the stage on what is to come
Episode 2 –This episode features Rudy Roschmann, an infamous young Jewish community activist who was held captive in Nigeria while filming his movie. Rudy joins Danielle and talks about antisemitism as a child and an adult and his perspective and beliefs about Israel and the Jewish world.    He is joined by his friend Eliran Ben Yair, an 18-year-old Jewish influencer, and Rabbi Harry Rozenberg is known for his positive pr for the Jewish World.
Episode 3-On location in Neve Zedek, Tel Aviv. Danielle Cooks with Sapir Barak https://instagram.com/shabbatcookingmagic?utm_medium=copy_link a single woman from Tel Aviv, who is a kosher foodie known for hosting big Shabbat meals. She was born in Israel but grew up in Belgium. Sapir like Danielle is half Ashkenazi and Half Sephardic and in general, her cooking is a fusion of her life. She brought mainly talks about Kosher food and Shabbat meals. This show focuses on some of her best Shabbat creations
Episode 4-Filmed on Location in Jerusalem the segment features Avigail Flisher + DR. Zhenia Flisher- Russian mother (Avigail), came to Israel a few years ago alone and is a very modest and gentlewoman, She hosted Danielle at her mother-in-law Zhenia’s house where you can experience the rich connection they have. The segment is centered around preparing Russian food, and conversation about her Russian roots and the family they have created here in Israel.
Episode 5- Filmed on location in Emek Hefer, Moshav Ometz, this episode features Esther Shor a funny woman, with intense presence and strong Yemeni routes who prepares with Danielle traditional Yemeni food at her sister Rutti Sigeti’s house on the kibbutz.  The food and conversation focus on Yemen life, traditional Yemen cooking, and filled with lots of joy and love.
Episode 6 – To Be Announced
What is next for Kosher.com in the way of new shows and series or content, chefs, and recipes?
We’ve got great shows in our pipeline you should look out for in 2022.  We are leaving our kitchen islands to travel the world in search of great kosher restaurants and learning about Jewish communities that have been existing and holding up their traditions all over the globe.  We are also going to be getting competitive, bringing in home cooks to compete for a chance to win big on kosher.com.  Stay tuned, there is much more in store!
For recipes and all kinds of information go to www.kosher.com or get the app
Instagram: kosherdotcom
Follow us on Facebook:  kosherdotcom