Los Angeles, CA (The Hollywood Times) 2/24/22 – Screening on Tuesday at the Los Feliz Theatre in Hollywood and Wednesday at the Aero Theatre in Santa Monica courtesy of the American Cinematheque and A24 has been Kogonada’s new film After Yang (USA, 2021). The film recently premiered at Cannes in 2021 and at Sundance 2022, where After Yang was the winner of the Alfred P. Sloan Feature Film Prize. Kogonada presents us with a sci-fi film in an only slightly futuristic world, where humans often reproduce through cloning, although adoption is still common and artificial intelligence now takes the form of lifelike androids integrated fluidly into daily life. 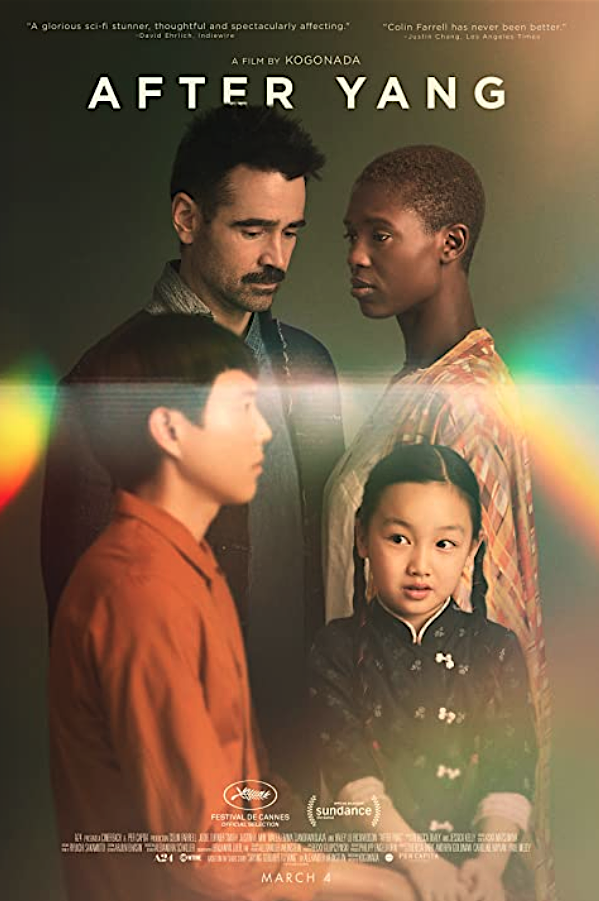 At the sold-out screenings, Kogonada provided an engaging Q&A about his film and also recommended viewing one of his favorite films – Toni Takitani (75 min, Japan, 2004) which screened afterwards. After Yang is being released in theatres on March 4 and on line with Showtime.

Yang, a “technosapien,” was first purchased by the family to educate Mika about her Chinese heritage. But he’s come to mean something more than that to each of them. When Yang unexpectedly malfunctions one day, his disappearance creates a void – and leaves Jake with lingering questions, especially as evidence emerges of the surprisingly complex inner life Yang led.

Much of After Yang follows Jake’s efforts to have Yang repaired, as he eventually discovers that the android had been recording memories and starts to play them back at home. It is through this process that Jake begins to reckon with the reality of losing Yang, whose presence he had taken for granted, and parses the complexities of his connection to the android.

In After Yang, Kogonada taps into loss and grief in a way that feels both progressive and familiar at the same time. In this future, something exists called a “techno sapien.” Imagine the logical development of tech like Alexa to an android form, a companion who can assist around the house, learn new habits, and even provide a tie for your adopted child to her culture. That was the hope of Jake and Kyra when they purchased Yang, more than just a babysitter to young Mika. Yang became a part of the family. And then suddenly one day, Yang ceased to function.

Jake encourages the heartbroken Mika that he can find the person to repair the unresponsive Yang, but Jake bought him refurbished instead of new, so the warranty and even the original seller aren’t as easy to track down. It leads him to an underground parts dealer who basically removes a memory bank from Yang. The designers were testing a technology wherein the androids could record a few seconds at a time whatever they considered important.

Jake watches some of these memories, many of which unfold as montages that are reminiscent of the memories from Malick’s The Tree of Life – a beautiful moment with Mika, something gorgeous in mother nature, a sound bite, etc. The impact of these brief sequences is unforgettable if you really consider what’s happening. Imagine being able to look through the eyes and memories of someone you’ve lost. What did they consider important enough to record? What mattered to them? How did they see you and themselves? As Jake endeavors to save Yang, he discovers how much he didn’t know about him, including a relationship with a girl named Ada (Haley Lu Richardson), who has a startling story of her own.

There are also flashbacks to key moments in the life of Yang with the family. One senses the influence of Andrei Tarkovsky in the visual aspects of tapped memories. Kogonada plays with aspect ratio, using three to delineate perspectives. In one of the crucial Jake memories, Yang is asking his owner/father how he got into the business of selling tea. Jake tells him he doesn’t even like the flavor but the experience – the steeping, the smell, the process. Yang knows all the facts there are to know about the history of tea, but he can’t be programmed with what really interests Jake about it.

Colin Farrell imbues Jake with just the right blend of grief, frustration, and uncertainty. He wants Yang back, not only for his daughter but for what he meant to Jake too. And when it appears that Yang’s memories could be a part of a public display, he questions what’s appropriate when it comes to how our loved ones are remembered on a broader scale. What do we keep for ourselves? What do we share with the world? Through all this technology and deep philosophy, Farrell grounds the film by understanding how much we will continue to look for those elusive aspects of life that can’t be created in a lab. It’s an incredibly subtle performance, one that’s matched by supporting players like Sarita Choudhury and Clifton Collins Jr.

Kogonada’s film is constantly asking incredibly deep questions, culminating in a flashback scene in which Kyra and Yang talk about what’s next. Yang hasn’t been programmed to believe in anything, even saying “There’s no something without nothing.” Is life the something, following by the nothing? Kogonada, the pseudonym that he has adopted, explains: “The conversation of cinema for me, beyond the technical and historical aspects, is a conversation of time, existence, and humanity. It’s deeply philosophical, but in a way that is fleshed out and materialized-philosophy as a kind of temporal experience.”

Kogonada is a South Korean-born American filmmaker known for his 2017 film Columbus as well as his video essays that analyze the content, form, and structure of various films and television series. The essays frequently use narration and editing as lenses, and often highlight a director’s aesthetic. He has to his name more than a dozen short video essays about Wed Anderson, Tarantino, Kubrick, Malick, Hirokazu, Ozu, Bresson, Chris Marker, Bergman, Hitchcock, and Godard.