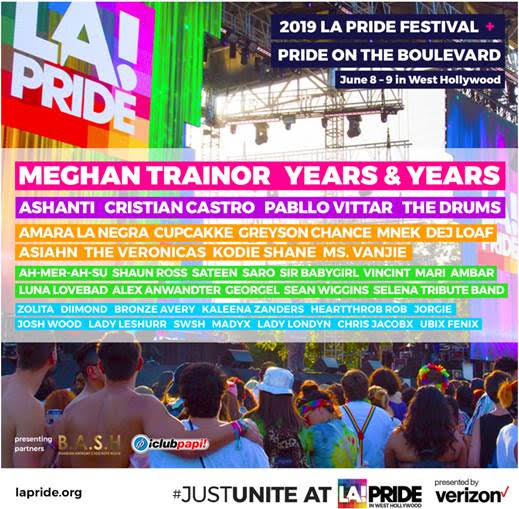 If you’re interested in speaking with any performers either in advance of the festival or on-site, please send me your wish list and we can work to coordinate. As a reminder, everyone might not be available, but we’ll do our best to accommodate.

Please see the full lineup for the Festival and “Pride on the Boulevard” block party, below.

With an all new stage layout for 2019, all artists, regardless of genre, will be featured on two stages located inside the LA Pride Festival grounds. From hip-hop and pop to Latin and EDM, this year’s performers are coming together on both stages to celebrate this year’s theme, #JUSTUNITE, which recognizes that the work the LGBTQ+ community does together ultimately makes it stronger and more resilient than ever before.

Festival goers are encouraged to purchase tickets in advance at lapride.org. General admission single-day tickets ($30) and weekend passes ($50) are still available. “Backstage VIP Experience” single-day tickets ($250) and weekend passes ($450) are also still available for purchase and include a dedicated VIP entrance to expedite festival entry, backstage access to the Park & Plaza Stages, two complimentary SKYY Vodka cocktails and a complimentary afternoon meal. Additionally, volunteers, who can donate four hours of their time to the celebration, receive complimentary tickets to the festival.

Ticket sales and proceeds from the LA Pride Festival support and fund the LA Pride Parade and CSW’s philanthropic efforts. This includes community-wide programs including Casa del Sol, a joint project with APLA Health that provides low-income housing to people living with HIV/AIDS, and PLATform, a policy, leadership, and advocacy training program to help amplify the voices of the transgender community. Additionally, proceeds benefit the USC GLASS Endowed Scholarship, a grant program awarded to students to help them conduct research affirming the important role the LGBTQ+ community plays in society today. Funds raised will also help CSW prepare for its 50th anniversary in 2020.

Christopher Street West engages with JJLA LLC in the event production and management of the LA PRIDE Festival & Parade. For more information on JJLA visit www.jj-la.com. LA Pride is made possible thanks to generous sponsorships from its corporate partners like Verizon and supports from the City of West Hollywood.

Christopher Street West (CSW), a 501(c)3 non-profit, organized the world’s first permitted parade advocating for gay rights on June 28, 1970, as a response to and in commemoration of the Stonewall Rebellion on Christopher Street in New York City the year prior. Since then, we have built a rich history as an active voice for the LGBTQ+ community across the Greater Los Angeles metropolitan area. Today, we continue to produce the globally-recognized LA Pride Parade and Festival every June in the City of West Hollywood. We also organize a number of events throughout the year with our non-profit, philanthropic, community, and corporate partners. Visit lapride.org for more information.