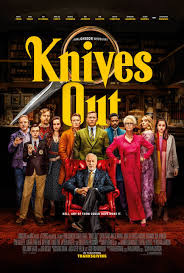 Beverly Hills, CA (The Hollywood Times) 10/28/2019 – “This is the kind of movie that makes me feel bad about myself,” said Drew Goddard to Rian Johnson following a screening of Knives Out at the Writers Guild Theatre.

Considering that Goddard won an Oscar for writing The Martian and is the creator of critical darling The Good Place, I think Johnson should have blushed louder.

“A Swiss clock of a screenplay,” Goddard called it, and that’s a perfect description. Every spring and gear in this intricate whodunit meshes perfectly, a trail of clues laid out in plain sleight-of-hand. Johnson says he was trying to turducken a Hitchcock suspense thriller inside an Agatha Christie drawing-room detective puzzle. Toss in a sprinkling of Columbo and some Murder She Wrote, make it laugh-out-loud funny, and you’re getting the idea.

“I grew up reading Agatha Christie,” says Johnson. “There’s a comfortable moral clarity in a whodunit.” Actually, there are some moral gray areas in this one, but to give away too much of the story would spoil your enjoyment. Johnson showed with 2012’s Looper that he can convolute a plot with the best of them; Knives Out will cement that reputation. It was a festival favorite at Toronto and is earning a 99% rating on Rotten Tomatoes. 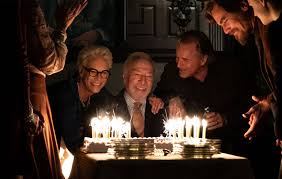 Essentially, the irascible but loveable – and very, very rich — mystery writer Harlan Thrombey (Christopher Plummer) wakes up the morning after his 85th birthday party with his throat slit. Okay, he doesn’t exactly awaken…. The police call it suicide, but an unknown someone has commissioned famed private detective Benoit Blanc to come to Harlan’s storybook Gothic mansion and search for signs of foul play.

If “Benoit Blanc” sounds like a naked hat-tip to Hercule Poirot – ding ding ding, you are correct. Blanc is gleefully played by 007 himself, Daniel Craig, with a honey-dripping Southern accent that Harlan’s grandson Ransom (Chris Evans, as a trust-fund douchebag) dubs “CSI KFC.”

Everyone has a motive, of course. There’s daughter Jamie Lee Curtis, giving Dame Maggie Smith-level side-eye as the daughter who turned a million-dollar loan into a business and brags of being “self-made.”

Don Johnson is her condescending, mildly racist husband. Son Michael Shannon runs the family publishing business; daughter-in-law Toni Collette has a bush-league GOOP lifestyle brand. There’s an “alt-right incel” boy and a “liberal snowflake SJW” girl in the next generation – at least, that’s what they dub each other. The mansion may be Gothic; the politics are contemporary. Harlan is even survived by his mother, delightfully played by K Callan, who is “we have no idea” how old, according to her family.

And then there’s Marta (Ana de Armas), the dead man’s nurse companion. She’s from Ecuador, or maybe Paraguay, or maybe Brazil, and Craig enlists her as his human lie detector. Marta is the emotional center of the story, which gets complicated because… I’m not going to tell you. I don’t want to spoil your fun.

Cinematography by Steve Yedlin, Johnson’s collaborator since they were teenagers, saturates the frame with color and shadow until it looks like a box of chocolate-covered candied fruits. The visuals are so shot through with Easter eggs and sight gags I will probably have to watch it again to catch them all. Besides, I missed some dialog because the audience was laughing so loudly.

I don’t mind. This is the rare whodunit that you can enjoy even if you already know who did.