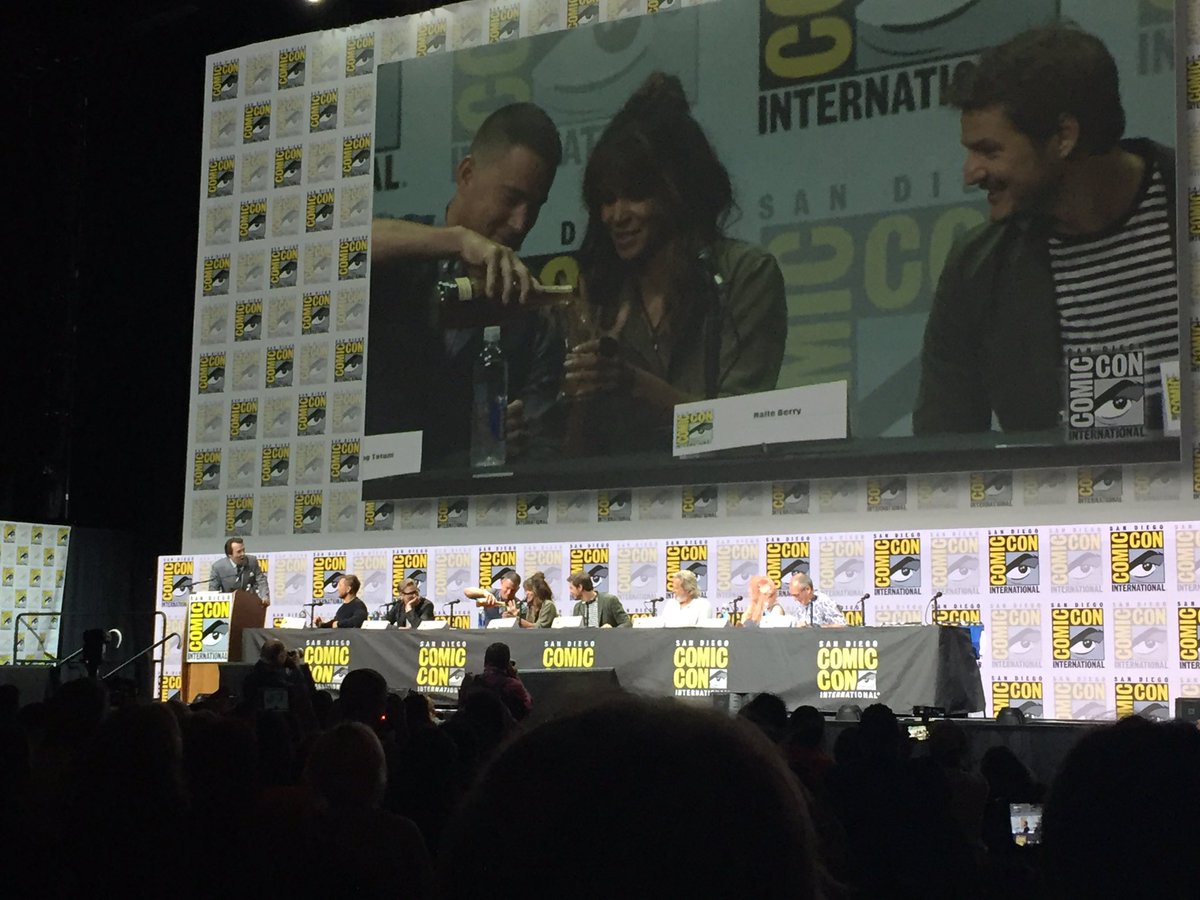 San Diego, CA (The Hollywood Times) 07/20/2017 – Launching the 2017 Comic-con presentations in San Diego, gracing the coliseum of all ballrooms in Hall H were the mega-talented cast, co-creators and writers of Kingsman: The Golden Circle, due out in theaters on September 27th

Riding on the finely fashioned coattails of the successful 2014 Kingsman: The Secret Service movie, panelists including cast members Colin Firth, Taron Egerton, Jeff Bridges, Halley Berry, Channing Tatum, Pedro Pascal, and co-creator David Gibbons and screenwriter Jane Goldman, enjoyed an interactive conversation through Q&A with audience members and statesmen enthusiasts which revealed how much fun and excitement this movie delivers.  Additionally, Matthew Vaughn was able to send a shout out to the Comic-Con audience via FaceTime.

Clips of the beginning of the movie and a few of the key characters ignited on screen as the action-adventure story zoomed directly into the laps of the capacity audience of 6,500.  With an amazing first look at the opening moments which included death-defying stunts, outstanding sequences of action, stylish and slick fight scenes, and incredible character introductions, this must-see movie promises to be another big hit.

The panelists shared playful banter about new skills that they acquired, vices, and other special talents which engaged the audience.  No misses with this witty group.  When the panelists were asked what quality is in a person to make them a true kingsman or statesman, shots of bourbon were poured for each cast member.  However, when Channing poured a pint for Halle and the audience challenged her to chug it down, she took the challenge and downed it – afterwards saying “being able to put down a pint of bourbon and still stand and don’t get your hair messed up while you’re doing it was what it takes to be a statesman”.  She garnered the house applause.  Egerton answered “impeccable manners, the ability to throw a pretty decent right hook, and some seriously beautiful threads as well”.  Firth said “your umbrella work needs to be pretty good…also good emotional management”.  Tatum smiled saying “drink and fight”.  Pascal snapped “crack that whip”.  Bridges stated “a nice pair of boots might come in handy”.

When asked about being a part of this project, Egerton happily proclaimed that “it’s a dream job, the movie is so cool… you get hurt a little bit, but it’s great, it’s awesome”.  Tatum boasted that he “was begging to be in this movie… and that he was a fan of the first movie… and it was a lot of fun”.  Firth shared that he “had a bit of a different task this time… the training for the first one for someone who has absolutely no athletic talent at all was a great challenge and made this time feel different and cool”.  Bridges explained that “if The Dude was a statesman, he probably wouldn’t make bourbon, he’d make that clear stuff, like vodka”.

Ending with a Hall H selfie with thousands of Comic-con attendees wearing their orange Kingsman t-shirts to commensurate the moment was another highlight for the fans.