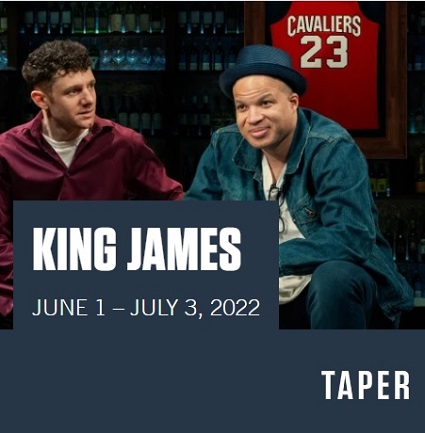 In a World Premiere Production by the Center Theatre Group, Rajiv Joseph’s new play uses the career of LeBron James as a Cleveland Cavalier to reveal the true nature of friendship

In the modern age, there is an excellent argument to make that sports as a manifestation of popular culture have replaced religion as the benchmarks and yardsticks by which many people measure the progress of their lives. In the world premiere production of King James at The Mark Taper Forum, the career of LeBron James as a Cleveland Cavalier is a perfect example of such benchmarks and yardsticks in the lives of two friends. Indeed, “In a town that was searching for someone to look up to, no figure loomed as large as LeBron James.”

Meeting for the first time during the basketball player’s rookie season with the NBA team, Matt (Chris Perfetti) and Shawn (Glenn Davis) do not realize how this first meeting will begin a complex and lasting connection. After running into a string of bad luck, Matt is trying to sell the rest of his season tickets, and Shawn dreams of finally seeing a game live. However, Matt is selling a pair of tickets, and Sean honestly has no one to go to the games with him. Together, they work out a compromise that leads to an enduring friendship.

Although the play is all about being a fan, particularly during the epic roller coaster ride of LeBron James’s back-and-forth dance with the Cleveland Cavaliers, it is much about the ups and downs of being a human being. Expertly directed by Kenny Leon, the play was partly developed with assistance from The New Harmony Project and SPACE on Ryder Farm. Such development is evident in a straightforward narrative that accesses complex emotional realities and laugh-out-loud comedic moments.

Do you need to be a fan of professional basketball to appreciate this play? The answer is a blurry yes and no. Although the play succeeds well beyond that realm, the nuts and bolts of the storytelling are tied to the career nuances of LeBron James. Without knowing this information in advance, many of the play’s key moments could be confusing. However, it would not take long to fill in the gaps. By reading the Wikipedia page of LeBron James or a Sports Illustrated article about his career, you would have what you need to get the play.

Also, LeBron James and his career as a Cleveland Cavalier are not the heart and soul of the play. Instead, they are more the window dressing to the lives of the two main characters. Indeed, the story shows how human beings use macrocosmic events that seem ultra-important at the time – like NBA free agency or a once forsaken team’s championship run – to interpret and massage the microcosm of their own lives.

Sports are a filter by which we can see not only ourselves but also our friends, our loved ones, and so much more. Indeed, there is a reason why we are such loyal fans. It is not only because we love the game but because we love what the game shows us about ourselves. We love being unveiled by the tragedies and the triumphs, the successes and the failures, and the ever-changing nature of a game that reflects the game of life.