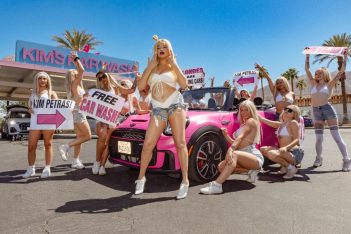 Kim Kicked Off Weekend One With Her Wet & Wild Car Wash & A DJ Set At Day Club Palm Springs
Dialing up the desert heat, international pop sensationKimPetras electrified Coachella’s Mojave Stage Sunday night in front of a sea of festivalgoers with an epic performance worthy of her anticipated festival debut.
Kim took the stage against a backdrop of footage from her vlogs as a teen while “Hardcore Vibes” by Rave Allstars played – a nod to the German techno she loved growing up. Coming in hot with choreography fit for a pop diva and flanked by back-up dancers, Kim launched into her showstopping set with the live debut of songs from her latest release, the sex-positive Slut Pop EP while cracking a whip to the beat. Pouring a bottle of water over herself to cool off amidst cheers from the crowd, Kim bought back the rave vibes after showing off her isolated vocals with techno remixes of fan favorites “Hillside Boys” and “Heart To Break.” “Future Starts Now” followed and Kim teased unreleased songs from her highly anticipated upcoming debut album, proving that good things come to those who wait after the pandemic postponed her planned Coachella debut in 2020. Kim wore a custom leather outfit designed by Zana Bayne and the stage featured a huge, illuminated star from Kim’s Slut Pop art.
Before bringing the party to Day Club Palm Springs with a DJ set Friday night, Kim kicked off the weekend with her Wet & Wild Car Wash on Friday afternoon, treating fans and passersby to free car washes at Rancho Super Car Wash as well as a Recovery and Rehydration Lounge provided by Vita Coco. Inspired by the bubblegum aesthetic of early 2000s pop music videos and movies, Kim and her “Coconuts” arrived in a hot pink MINI Cooper with a group of Kim look-alikes in white bikinis, jean shorts, and blonde wigs.
Next up, Kim will headline NYC Pride’s Pride Island on June 26th at Governors Island. Tickets are on sale now