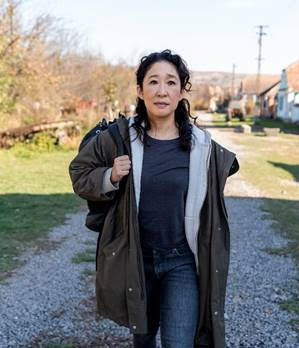 Season two of Killing Eve had the highest rate of growth of any returning TV drama since the final season of AMC’s Breaking Bad in 2013, doubling its season one audience in Live+SD. The third season continues the story of two women with brutal pasts, addicted to each other but now trying desperately to live their lives without their drug of choice. For Villanelle, the assassin without a job, Eve is dead. For Eve, the ex-MI6 operative hiding in plain sight, Villanelle will never find her. All seems fine until a shocking and personal death sets them on a collision course yet again. The journey back to each other will cost both of them friends, family, and allegiances…and perhaps a share of their souls.

In the new first-look photos released today, it’s revealed that Eve (Oh) has survived being shot by Villanelle (Comer) in Rome, but her current status with MI6 remains unknown after being manipulated by Carolyn (Shaw) in the events of last season’s finale. And it’s clear that Villanelle continues to never miss an opportunity to dress up for the job.

“These photos are gorgeous and also a bit of a spoiler – yes, Eve is still alive!” said Sarah Barnett, President, AMC Networks Entertainment Group & AMC Studios. “These two blindingly good actors return for a season that finds both characters somewhere new. What remains the same is that Killing Eve will continue to pull fans along for a ferociously original and heart-pounding ride.”

Sally Woodward Gentle, executive producer for Sid Gentle Films Ltd., said, “Where do we start? It’s six months after the bloody events in Rome with Eve and Villanelle both feeling that they have restarted their lives, but both fooling themselves horribly. This is a season about identity, self-determination and chaos.”

Get caught up: Killing Eve seasons one and two are available on Hulu, Blu-ray and download-to-own platforms.

BBC AMERICA is a hub of innovative, culturally contagious programming including the Peabody Award-winning series Killing Eve starring Golden Globe® and SAG® Award-winner Sandra Oh and Emmy® Award-winner Jodie Comer. The network is the definitive home and co-producer of the most iconic natural history programming including Planet Earth II, Blue Planet II, Dynasties, the upcoming Sir David Attenborough-narrated series Seven Worlds, One Planet and the return of the Emmy®-winning series Frozen Planet II and Planet Earth II I- all a part of the new Saturday nature television destination, Wonderstruck.  A joint venture between AMC Networks and BBC Studios (the commercial arm of the BBC), BBCA’s influential shows such as Doctor Who, Orphan Black, Luther and Broadchurch, among many others, have attracted critical acclaim and earned Emmy® Awards, Peabody Awards, Critics’ Choice Awards, TCA Awards, NAACP Image Awards, an IDA Documentary Award, a Gotham Award and Golden Globes®. Created in 1998, the irrepressible network has garnered one of cable’s most curious, educated and affluent audiences, with many properties boasting super-fan levels of engagement. Its unscripted slate includes the iconic car show Top Gear, buzzy and hilarious The Graham Norton Show and the world’s biggest darts championships. Get caught up, BBCA offers full episodes On Demand across all major digital platforms, BBC AMERICA app and bbcamerica.com. Find out more by visiting press.amcnetworks.com.

Sid Gentle Films Ltd. was founded by Sally Woodward Gentle in 2013 along with Lee Morris and Henrietta Colvin with a focus to develop and produce innovative, original and ambitious television drama and feature films. Credits to date include: BAFTA nominated The Durrells for ITV and Masterpiece, the highly acclaimed SS-GB for the BBC, Neil Gaiman’s Likely Stories for Sky and the BAFTA and Peabody winning and Emmy® and Golden Globe® nominated Killing Eve for BBC AMERICA.

Rosie Flores & The Talismen Get Inspiration from The Everly Brothers