Washington DC (The Hollywood Times) 11/15/17 – “They told me I was too old to be adopted. I felt sad, I wanted a family… and I couldn’t have it”.  For Lorena, home was a concept she didn’t let herself believe in. In Colombia, she watched younger kids, including her brother, find families and move to a new home, while she grew older and, according to conventional wisdom, less adoptable.

Today, Lorena is a junior in high school with dreams of Harvard and a postgraduate degree, and her dreams are supported by a loving family.

The annual Miracles Gala: No Place Like Home lived up to its name, reminding all of us that home isn’t just a place but a feeling, a nexus of connections that shape us into the people we are.

For Judy Dlugacz and Claire Lucas, Kidsave turned their household of two into a home of three. Their 12 year old daughter, Angie, first visited them as a part of Kidsave’s summer miracle program. This innovative program brings Colombian children to the U.S. to meet prospective adoption families, allowing parents and children to develop a natural connection before the adoption process.

The honorable Camilo Reyes, Ambassador of Colombia to the United States, presented Claire and Judy with the Champion for Children award in honor of their meaningful contributions to Kidsave. Claire and Judy are leading philanthropists in D.C., but they’ve also raised more than funds for Kidsave.  As the first openly gay couple to host a Colombian child in Washington, D.C., Claire and Judy have helped Kidsave better serve the LGBT community.

Adoption within the LGBT community remains a controversial issue in many ares. Over the past few years, multiple states have introduced bills allowing adoption agencies to discriminate against LGBT couples despite the many loving families waiting to welcome kids into their home. Claire and Judy are lifelong champions of women’s and LGBT rights, and thanks to the work of many organizations they support, discrimination is finding fewer and fewer footholds.   At the Kidsave gala, however, Claire and Judy were recognized not just for their trailblazing activism, but for the most important role they have now taken on: Angie’s parents.

Kidsave honored them with the Power of Parents award for loving without judgement, and using what little free time they had to support Kidsave as volunteers and fundraisers.

After hearing the incredible stories of Lorena, Claire and Judy, and Matt and Kim, the night shifted to its most important purpose: raising the funds Kidsave needs to bring prospective families together. With a large and varies silent auction, and a live auction filled with luxurious vacations, there was no shortage of opportunities to enjoy the benefits of a Kidsave donation.

Yet the most powerful donations were those made in return for a simple item- a bright yellow balloon, passed to you by a child who had found their family through Kidsave. These balloons were given only to those who donated directly to Kidsave, with no intention. 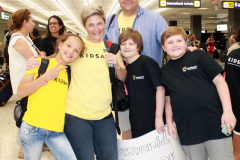 There may be no place like home, but Kidsave is determined to create the connections, the love, and the opportunities that define the feeling of finding a home forever.

ASC to Honor Viola Davis with Board of Governors Award