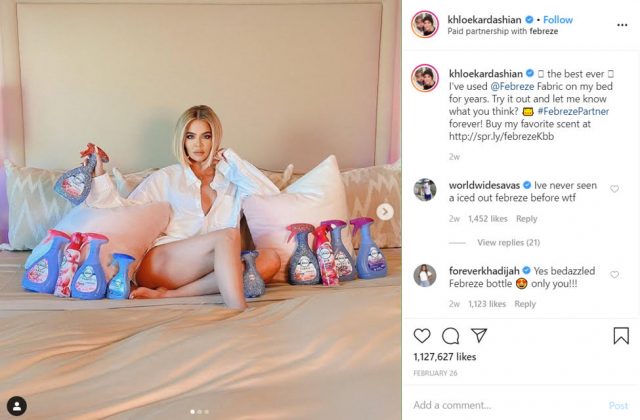 Cleaning influencers have grown rapidly in popularity over the past couple of years, but have you ever wondered how much these influencers as well as normal celebrities could be earning from their sponsored cleaning posts?

Well, a new study by Victorian Plumbing has revealed all! By looking at the average amount of cleaning posts and stories they’ve posted in the past couple of years, they’ve managed to work out which celebrity is earning the most.

Back in February 2020, Febreze teamed up with Khloé Kardashian to promote their products and had great plans in mind. Unfortunately, social media wasn’t so kind as fans were confused by the odd brand partnership.

However, although people may have been baffled by it, Khloe could have earned a humongous $848,300 from the post!

Check out the other big earners in the list below:

Jessica Alba could be earning over a million dollars per year from her sponsored cleaning posts! 🧽

The actress turned entrepreneur who now has an extremely successful business selling natural beauty and cleaning products, could be earning approximately $646,200 from posting cleaning products on her Instagram.

Victorian Plumbing is a major online bathroom retailer based in Merseyside, UK that was founded in early 1999.  They are one of the UK’s largest retailers of branded and in-house designed bathrooms & accessories.