Hollywood, CA (The Hollywood Times) 5/30/17 – The accomplishments of actress Keri Russell were honored with a Hollywood Walk of Fame star in the category of Television at 6255 Hollywood Boulevard on the afternoon of Tuesday, May 30th, 2017 beginning at 11:30 a.m.  The event was emceed by Hollywood Chamber President/CEO Leron Gubler along with guest speakers Matt Reeves, co-creator of “Felicity;” Joel Fields, Executive Producer and Writer of “The Americans;” and director J.J. Abrams.

This was well timed to coincide with the season finale of “The Americans” in which Russell stars the same evening on FX.  The critically acclaimed show will run for a 10-episode sixth and final season in 2018.

“The Americans,” a tense and thought-provoking Cold War drama set during the Reagan Administration, has been reputed to get better year after year ever since it launched in 2013.  The diminutive 41-year-old Russell with her trademark mop of curly hair and beginnings with the Mickey Mouse Club was an excellent casting choice for television’s most unlikely-looking Russian agent. 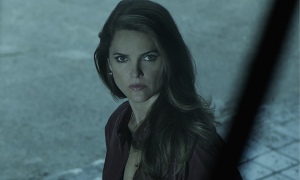 “I know not every mom is a secret KGB spy, but every mom has this whole other life,” Russell has said of her dual-identity role.

Prior to “The Americans” this accomplished dancer was best known for her Golden Globe-winning portrayal of all-American Felicity Porter in the popular series FELICITY.  In 1999 she made People Magazine’s famed “50 Most Beautiful’ list and has served as a model and spokesperson for Cover Girl cosmetics.

“Acting is a strange profession, and, yes, sometimes I struggle with its worth, its value in the world,” Russell claims.  Here’s hoping the struggle has finally ended for her right at the Hollywood Walk of Fame!