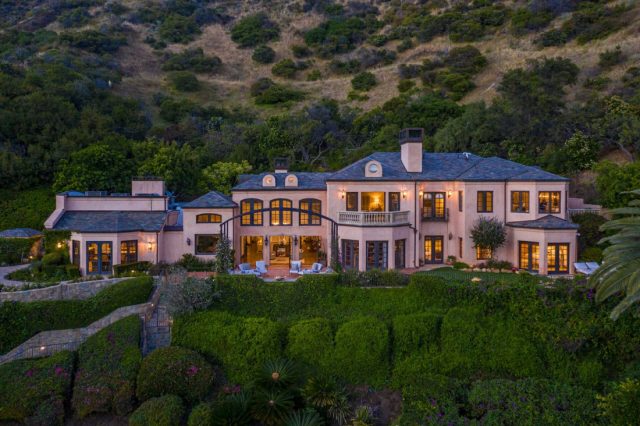 Kelsey Grammer’s former Malibu Hills equestrian estate, and the Vanderbilt Mansion where Gloria Vanderbilt lived as a child before her mother took her to live in Paris are for sale. .

The palatial 1940’s Malibu Hills equestrian estate once owned by Kelsey Grammer and ex-wife Camille Grammer, star of ‘The Real Housewives of Beverly Hills,’ has hit the market priced at $19.95 million. In addition to its celebrity owners’ history, the home was often seen in Camille’s ‘Real Housewives’ television episodes. Married in 1997, Kelsey and Camille purchased the private, guard-gated French Country home in star-studded Serra Retreat a year later and Camille continued to live there after their divorce in 2011. The Grammers put it up for sale in 2012 and it sold in 2015.

Perched on a terraced hill over five acres and with ocean views, the main house measures 6,650 square feet with formal living and dining and a two-story ballroom perfect for holding large functions. The large kitchen was designed by Wolfgang Puck that includes an indoor-outdoor dining area. There is a wine cellar, large movie theater and wood-paneled library. The master suite has a sitting room and private terrace with mountain and ocean views and spa-style bath while the luxurious guest suites each include fireplaces. Among the lushly planted gardens and lily pond are a carriage house, a security outpost, a six-stall stable, dressage riding ring, a variety of outbuildings and staff quarters. The free-form, resort-size swimming pool has a bathhouse, two spas, an exercise room and a lighted tennis court. Outdoor dining can be enjoyed with organic fruit and vegetables from the garden, cooked outside in the barbecue area where there is also a fireplace to enjoy after-dinner conversation. The entire estate includes 13,926 square feet, seven bedrooms and 13 baths.  Listing agents are Sandro Dazzan and Cooper Mount of The Agency, Beverly Hills.

Gloria Vanderbilt was a fashion designer, author, actress and the mother of CNN anchor Anderson Cooper. Much admired, Gloria recently passed away at the age of 95. The elegant Manhattan mansion still known as the Vanderbilt Mansion, where Gloria Vanderbilt lived as a child before her mother took her to live in Paris, is now for sale priced at $50 million.

Originally built by Robert B. Lynd in 1891 and restyled in 1905 by William Strom, the seven-story townhouse is located at one of Manhattan’s most-sought-after addresses on East 72nd Street. Designed in Néo-Grec style, the 18,408-square-foot townhouse is 27-feet wide with 12 bedrooms, 11 full bathrooms, three powder rooms and approximately 1,500 square feet of outdoor space. Rooms have 12-foot ceilings and there are three gas fireplaces. Enviably located between Madison Avenue and Fifth Avenue, it is a stone’s throw to Central Park in a neighborhood awash with art galleries and boutique shops. East 72nd Street has long attracted celebrities in the arts-and-fashion-design world including Ralph Lauren, John and Yoko Ono, Leonard Bernstein, Margaux Hemmingway, Joan Fontaine, Dorothy Parker and John Steinbeck. Though many of the street’s Gilded Age mansions have been torn down to accommodate exclusive apartment blocks, the sandstone Vanderbilt mansion, as it is still referred to today, is a beautifully kept building that blends attractively with its neighbors.

Currently divided into three luxury condos with multiple options for reconfiguration, the three units can be purchased together or purchased separately. The listing agent is Lauren Muss of Douglas Elliman Real Estate, Madison Avenue office.