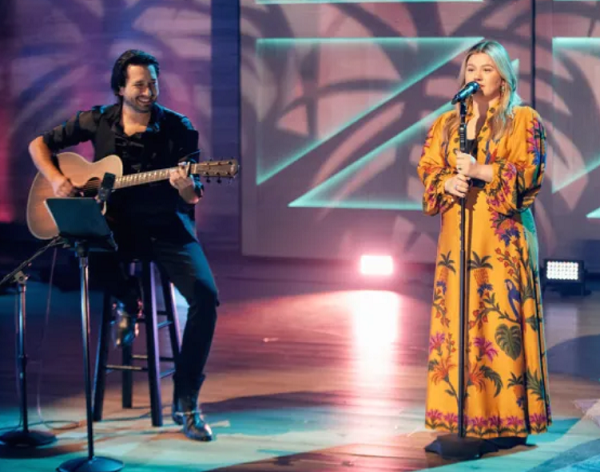 In the latest Kellyoke, Kelly Clarkson and Jaco Caraco on guitar perform a cover of “Vincent” by Don McLean.

“Kelly Clarkson truly captured the essence of my song ‘Vincent (Starry, Starry Night)’. I could feel her emotion with every word and I thoroughly enjoyed her performance,” says McLean.

Released in 1971, “American Pie” was named one of the top five songs of the century by the National Endowment for the Arts and the Recording Industry Association of America, and the original recording was selected for preservation in the National Recording Registry by the Library of Congress as being “culturally, historically or artistically significant.” The song is also the subject of an upcoming documentary. As part of the 50th Anniversary of “American Pie,” McLean was recently featured in an exclusive at-home interview with Entertainment Tonight.

“The Kelly Clarkson Show” is the critically acclaimed, uplifting daytime destination for humor, heart, and connection featuring Emmy® Award-winning talk show host, Grammy® Award-winning artist, and America’s original idol, Kelly Clarkson. The hourlong program, produced and distributed by NBCUniversal Syndication Studios, is the highest-rated talk show to debut in seven years. It features a mix of celebrity guests and everyday people, performances, games, and Kelly’s unfiltered perspective on life, relationships, parenting, and things that make her laugh along the way. “The Kelly Clarkson Show” airs in 100% of the country on more than 200 stations. Emmy® and Gracie® Award winner Alex Duda is the showrunner and executive producer. Clarkson is also an executive producer.

Don McLean is a Grammy award honoree, a Songwriter Hall of Fame member, a BBC Lifetime Achievement Award recipient, and his smash hit “American Pie” resides in the Library of Congress National Recording Registry and was named a top 5 song of the 20th Century by the Recording Industry of America (RIAA). A New York native, Don McLean is one of the most revered and respected songwriters in American history. After paying his dues in the New York club scene in the late ‘60s, he went on to score mega-hits like “Vincent (Starry, Starry Night),” “Castles in the Air” and many more. His catalog of songs has been recorded by Madonna, Garth Brooks, Josh Groban, Drake, “Weird Al” Yankovic, and countless others. In 2015, McLean’s handwritten manuscript of the lyrics to “American Pie” was auctioned by Christies, selling for just over $1.2 Million. 2019 honored Don with a star on the Las Vegas Walkway of Stars and his song “And I Love You So” was the theme for Prince Harry and Megan Markle’s wedding. Don landed a new recording contract with Time Life in 2020, with whom he released a catalog of recordings as well as a new album Still Playin’ Favorites. 2021 brought Don’s “American Pie” features in the Avengers’ Black Widow and the new Tom Hanks movie Finch. Don received a star on the Hollywood Walk of Fame, celebrated the 50th anniversary of “American Pie,” recorded a version of the song with a cappella group Home Free, a children’s book has been written, and much more! And when you think things are slowing down, not so for Don McLean!