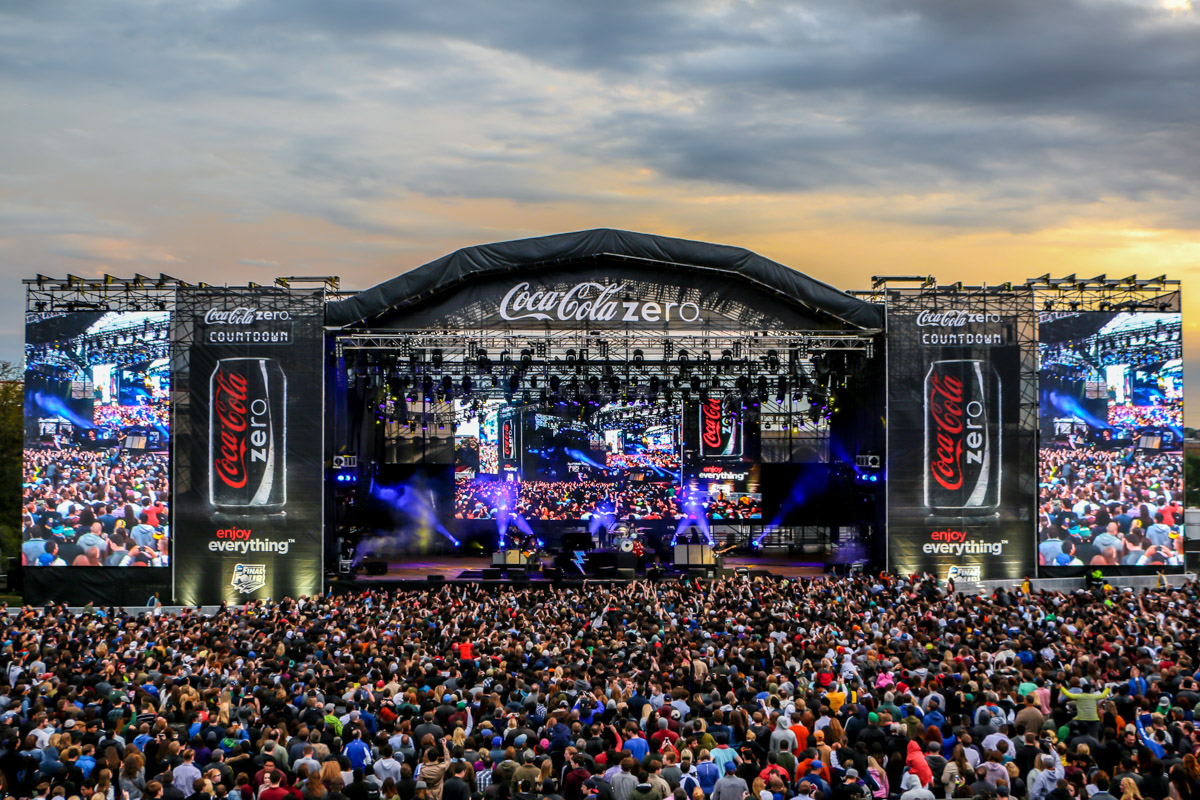 On Sunday April 2 Nathaniel Rateliff & the Night Sweats will open the Capital One JamFest followed later that day by Blink-182 and previously announced acts Macklemore & Ryan Lewis and headliner Aerosmith.

A selection of the concerts will be live streamed on ncaa.com, bleacherreport.com, and the official NCAA YouTube channel.  To stay up to date, fans can visit ncaa.com/finalfour, follow @FinalFour on Twitter.

Fans can also watch a selection of the weekend’s concerts being live streamed on ncaa.com, bleacherreport.com, and the official NCAA YouTube channel.  To stay up to date, fans can visit ncaa.com/finalfour, follow @FinalFour on Twitter, and download the Final Four app at ncaa.com/mffapp.

This is a non-ticketed event open to the public on a first-come basis featuring the following events:

The NCAA March Madness Music Festival is an activation extension of the NCAA’s Corporate Champions and Partners marketing program, which Turner Sports and CBS Sports license and collaborate on as part of an agreement with the NCAA through 2032.

Turner Sports and CBS Sports will provide live coverage of all 67 games from the 2017 NCAA Division I Men’s Basketball Championship across four networks — TBS, CBS, TNT and truTV for the seventh consecutive year.

AT&T Inc. (NYSE:T) helps millions around the globe connect with leading entertainment, business, mobile and high speed internet services. We offer the nation’s best data network* and the best global coverage of any U.S. wireless provider.** We’re one of the world’s largest providers of pay TV. We have TV customers in the U.S. and 11 Latin American countries. Nearly 3.5 million companies, from small to large businesses around the globe, turn to AT&T for our highly secure smart solutions.

**Global coverage claim based on offering discounted voice and data roaming; LTE roaming; and voice roaming in more countries than any other U.S. based carrier. International service required. Coverage not available in all areas. Coverage may vary per country and be limited/restricted in some countries.

About The Coca-Cola Company

The Coca-Cola Company (NYSE: KO) is the world’s largest beverage company, refreshing consumers with more than 500 sparkling and still brands and nearly 3,900 beverage choices. Led by Coca-Cola, one of the world’s most valuable and recognizable brands, our company’s portfolio features 21 billion-dollar brands, 19 of which are available in reduced-, low- or no-calorie options. These brands include Diet Coke, Coca-Cola Zero, Fanta, Sprite, Dasani, vitaminwater, Powerade, Minute Maid, Simply, Del Valle, Georgia and Gold Peak.

Through the world’s largest beverage distribution system, we are the No. 1 provider of both sparkling and still beverages. More than 1.9 billion servings of our beverages are enjoyed by consumers in more than 200 countries each day. With an enduring commitment to building sustainable communities, our company is focused on initiatives that reduce our environmental footprint, create a safe, inclusive work environment for our associates, and enhance the economic development of the communities where we operate.

Together with our bottling partners, we rank among the world’s top 10 private employers with more than 700,000 system associates. For more information, visit Coca-Cola Journey atwww.coca-colacompany.com, follow us on Twitter at www.twitter.com/CocaColaCo, visit our blog, Coca-Cola Unbottled, at www.coca-colablog.com or find us on LinkedIn at www.linkedin.com/company/the-coca-cola-company.

Visit ncaa.org and ncaa.com for more details about the Association and the corporate partnerships that support the NCAA and its student-athletes. The NCAA is proud to have AT&T, Capital One and Coca-Cola as official corporate champions and the following elite companies as official corporate partners: Allstate, Amazon Echo, Buffalo Wild Wings, Buick, Enterprise, Infiniti, Intel, LG, Lowe’s, Marriott International, Nabisco, Northwestern Mutual, Pizza Hut, Reese’s, Unilever and Wendy’s.