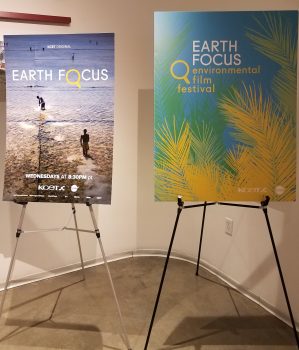 Santa Monica, California (The Hollywood Times) 4/24/2018 – “We have a series called Earth Focus, produced in partnership with Thomson Reuters foundation, which was launched in 2007.  It is the longest running environmental TV shows in the United States.” Juan Devis, KCETLink Chief Creative Officer told The Hollywood Times on Saturday.

“We have a very exciting new season starting on Wednesday, both nationally and locally on KCET. What we are trying to do this season is share a global story with a local story, that have a connection. How either climate change is effecting them in similar ways but in completely different parts of the globe. Bring two stories together in one.” Said Juan.

Juan mentioned that they almost didn’t have the second annual Earth Focus Environmental Film Festival because of limited resources a public television station to organize a film festival.  “I know this festival will grow because people are hungry for this type of content and get involved and figure out how to get activated. If we can be part of that, we are going to go forward with it.”  Juan said.

Lek told The Hollywood Times that Noi Na, the elephant that was recused and the star of Ashley Bell’s documentary Love and Bananas: An Elephant Story, was very happy, she was for the first time playing with a ball and was swinging her truck. She has two friends now. Check out Lek’s facebook page to find out more about Noi Na and Lek’s Elephant Nature Park: https://www.facebook.com/lek.chailert
The Hollywood Times presented Lek with a vest hooded sweater with an embroidered Dumbo on the chest and a couple of Disneyland Dumbo pins.  She was so happy to receive them.
She asks people reading this article to know she needs a voice to help with the education of elephants in service. Not to ride elephants, the elephants are overworked and not properly cared for and even work when they are pregnant and at times lose their baby. Do not buy painting done by elephants or go to circuses that have elephants there.

Raphael Sbarge: “The first one is always the hardest and now it actually feels like it has some momentum. There is a great vibe here, the fact that this is the only environmental film festival in Los Angeles is just crazy, right! You would think there would be many of them here. It is part of KCET’s commitment to the environment, speaking locally and tapping into the incredible pool of filmmakers and actors and people who really care about this.”
“It is so great and the fact that they are sold out speaks for itself. A spike in the curve in terms of awareness and a receptive audience.”

Maggie Q: “I will be introducing the movie tonight and it was a wonderful movie and I hate what we are doing to the animals. It does affect me a great deal.” 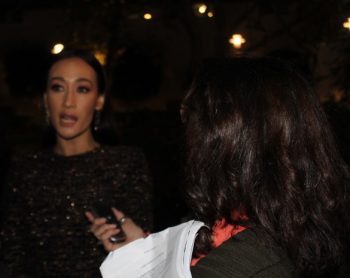 Patrick Fabian told The Hollywood Times that he was bringing his two daughters to the film festival and he was looking forward to watching the movie “Jane” with him.

He was also glad to hear that KCET was having the second annual Earth Focus Environmental Film Festival this year and he was happy to provide his support and looks forward for many more Environmental film festival in the years to come.

John Michael McCarthy, the writer and director of Love & Bananas: An Elephant Story told The Hollywood Times that this was a memorable experience for his being part of this elephant rescue and being in a truck with a 70-year old captive partially blind Asian elephant for 48 hours was somewhat intimidating. He is very proud of the work they all did on this amazing film and hopes that folks will go out to see it to be award of the abuse of service elephants.

On Fri., April 20 from 6:30-10:30 pm, KCET kicked off the second annual http://www.KCET.org/green EARTH FOCUS Environmental Film Festival, LA’s only environmental film festival, with an exclusive screening of Abramorama’s Love and Bananas: An Elephant

Story at Sony Studios’ classic Kim Novak Theatre followed by a Q&A with the filmmakers. 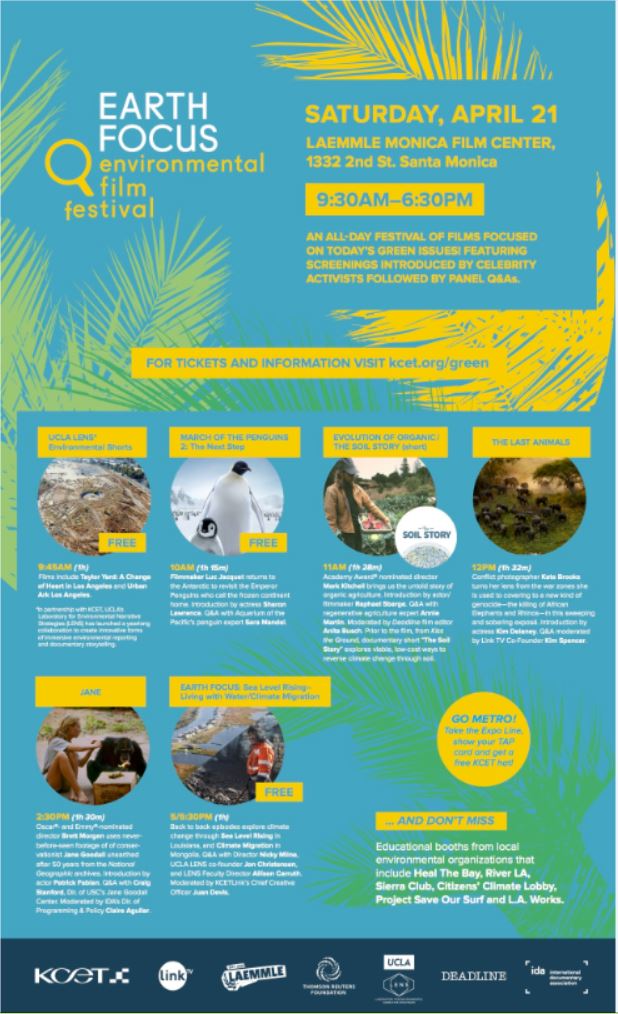 A full day of environmentally-themed films open to the public, with many of the films free of charge, kicked off with an environmental shorts screening from UCLA’s Laboratory for Environmental Narrative Strategies (LENS) program followed by four acclaimed films (March of the Penguins 2: The Next Step, Evolution of Organic, The Last Animals and Jane) and closed with a screening of two all-new episodes of KCET and Link TV’s EARTH FOCUS, the longest running environmental news magazine on U.S. television. Each film was introduced by a celebrity host and followed by a Q&A panel. More information about the screenings and the Q&A sessions that followed can be found at KCET.org/green.

All five of the movies shown this year, were educational, informative and eye-openers.  The Q&As after each film where truly worth staying after the movie to listen to.

Episode 101
Louisiana still is learning from Hurricane Katrina. Forecasts are dire for Louisiana to experience the second-highest sea level rise in the world. There is a big movement brewing in New Orleans to build adaptive “resilience zones.” In Southeast Louisiana, the native peoples of the Isle de Jean Charles have become the first U.S citizens moving within their homeland displaced by climate change.

Saturday’s event was attended by over 300 people committed to bringing environmental awareness and dialogue to our community with the hopes of helping save our planet for tomorrow.