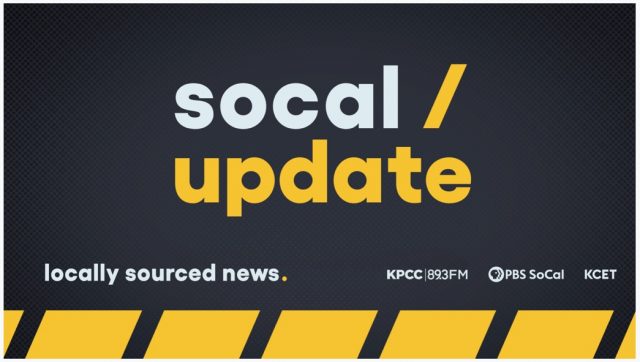 SOCAL UPDATE is published for on-demand listening anywhere podcasts are available. Two distinct, 2-minute daily segments will air on television every weeknight on PBS SoCal (5:28 p.m. PT and 10:58 p.m. PT) and every weeknight on KCET (5:28 p.m. PT and 5:58 p.m. PT, as well as a combined four-minute report at 8:56 p.m. PT) prior to the 6 p.m. PT daily airing of the award-winning news series PBS NewsHour and BBC World News on both stations respectively.

“We think this initiative reflects the best of public media, and reflects why so many Americans place their trust in public media. Our audiences view us as a trusted source in good times as well as in challenging times,” said PBS SoCal and KCET President/CEO Andrew Russell. “We believe that SOCAL UPDATE can provide an important new model for trusted local news and journalism for Southern California.”

“Our community has important needs and a strong interest in local news from around our region, which has been heightened by the pandemic,” said PBS SoCal and KCET Chief Creative Officer Juan Devis. “We are telling stories abandoned by commercial media as we are doing everything we possibly can to reach our community and make sure that local news is both free and available for all.”

“This community-owned, local, public media news collaboration sets a new model for trusted local news and journalism in Southern California as NPR and PBS are two of the most fair and accurate sources of news that exist in the world today,” said KPCC and LAist Chief Content Officer Kristen Muller. “We look forward to this exciting new partnership with PBS SoCal and KCET.”

The collaboration was initially tested last April when it became clear that the community needed timely local news about the COVID-19 pandemic and public health developments across the Southern California community. Over 150 episodes of an on-air, five-minute daily report on KCET called REPORTER ROUNDUP was created to give viewers the biggest local headlines of the day. This content aired weeknights on KCET and online at kcet.org/reporterroundup. Additionally, select segments were distributed through KCET’s and PBS SoCal’s social media accounts. The program also aired as a radio segment on KPCC and was made available online. The rapid-response experiment proved to be a great success for all involved and a strong public media partnership to serve Southern California was born.

Using the learnings of the past year, the partners decided it was time to launch the initiative with a more streamlined format and offer more exposure under a rebranded name, SOCAL UPDATE. A new format was designed along with a revamped production schedule that created new distribution logistics and workflows. Starting with a “piloting period” that began in mid-February, KCET featured two distinct 2-minute daily segments that aired during the station’s daily news block and then later, as a combined 4-minute interstitial in primetime every night which catered to a broader audience of viewers. After a successful trial period on KCET, the team “soft launched” the two-minute editions of SOCAL UPDATE on PBS SoCal as well. Starting today, a digital and marketing campaign will kick off promoting the new program on the partner organizations’ websites and distribution continues on partner social media accounts.

PBS SoCal and KCET are both part of the donor-supported community institution, the Public Media Group of Southern California, which was formed by the merger of PBS SoCal and KCETLink Media Group. PBS SoCal is the flagship PBS station for diverse people across California and delivers content and experiences that inspire, inform and educate. PBS SoCal offers the full slate of beloved PBS programs including MASTERPIECE, NOVA, PBS NewsHour, FRONTLINE, and a broad library of documentary films including works from Ken Burns; as well as educational content including PBS KIDS programs including DANIEL TIGER’S NEIGHBORHOOD and CURIOUS GEORGE. KCET is on-air, online and in the community, and plays a vital role in the cultural enrichment of Southern California. KCET offers a wide range of award-winning local programming as well as the finest public television programs from around the world. Throughout its history, KCET has won hundreds of major awards for its local and regional news and public affairs programming, its national drama and documentary productions and its website, kcet.org. For additional information about both KCET and PBS SoCal productions, web-exclusive content, programming schedules and community events, please visit  kcet.org  and pbssocal.org KCET Originals and PBS programming are available to stream on the FREE PBS App on iOS and Android devices, Roku, Amazon Fire TV, Apple TV, Android TV, Samsung Smart TV, and Chromecast. KCET is also available to watch live on YouTube TV, Amazon and Roku platforms. For more information please visit kcet.org/apps.

Join the conversation on social media by tagging #SoCalUpdate

Southern California Public Radio (https://www.scpr.org) is a member-supported multi-platform public media organization that has garnered more than 500 journalistic honors since 1999. Recognized as a national leader in public service journalism and civic engagement, SCPR’s flagship radio station, 89.3 KPCC-FM, reaches more than 900,000 listeners every week as the most listened-to public radio news service across Southern California. The network’s five stations (89.3 KPCC-FM, 89.1 KUOR-FM, 90.3 KVLA-FM, 89.9 FM, and 89.5 KJAI-FM) deliver award-winning local news coverage to the diverse communities of the region, including a robust slate of signature programs from NPR, APM, the BBC and PRI. LAist (https://laist.com) is a digital news site committed to in-depth reporting about life in the Los Angeles metropolitan area. Its award-winning work reaches over seven million people per month, and in 2019, the brand grew to include LAist Studios (http://laiststudios.com), a dedicated podcast development and production studio. Furthering SCPR’s commitment to premium on-demand audio storytelling, podcasts from LAist Studios aim to reflect the ethos of Los Angeles — a forward-looking, minority-majority community built upon unmatched diversity, inclusion, and drive — going beyond geographical borders to connect with listeners around the globe who share the LA state of mind.