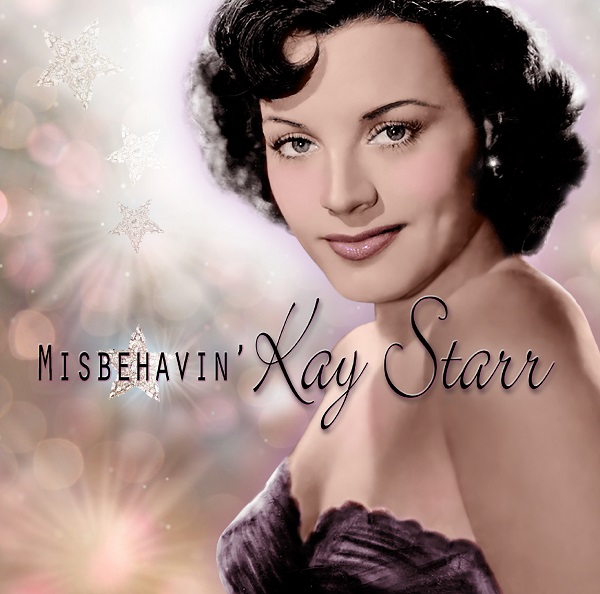 NASHVILLE, Tenn. (March 22, 2021) —  Kay Starr Misbehavin’ Album has been released by Hindsight Records as part of their Reimagined Series. The project was produced by John F. Forbes with Thomas Gramuglia as Executive Producer. The Sentimental Pops Orchestra was conducted by John Forbes and the original orchestra was conducted by Billy Butterfield on “So Tired.” Additional production was recorded, mixed and mastered by John Forbes at Forjam Studios. The project is being distributed by Select-O-Hits in both national and international markets. The Kay Starr Misbehavin’ album is available for streaming and download on all digital music platforms including Apple Music, iTunes, Spotify, Amazon Music, YouTube Music, Pandora and more here.

“These new recordings encapsulate the magic of the original performances as well as elevating these moments with an energy and luster that these artists truly deserve,” expressed producer – John Forbes. “The final results of these efforts, makes this great music available to audiences for generations to come.”

The late, great jazz singer Billie Holiday once said that Kay Starr was “the only white woman that could sing the blues.”

One of the most versatile of all popular singers, Kay Starr sang swinging jazz, country tunes, ballads, pop songs, and rock & roll with nearly equal success. She started early, ended fairly late in life, and was always a joy to hear. On this reimagined reissue, she is featured on early radio transcriptions that also include three classic jazz greats and the subtle and inventive orchestrations of John Forbes.

On several occasions during 1945-49, a young Kay Starr recorded jazz sessions that were made strictly for the radio. The best of these transcriptions are reissued and reimagined on this release. Nine selections from May 1945 team her in a combo with violinist Joe Venuti and guitarist Les Paul. The other two dates, one song from a big band and four with a combo that includes trumpeter Billy Butterfield, are from the 1947-49 period.

”I have used my Sentimental Orchestra for each of these historic recordings, and it has been a great opportunity,” says Forbes. ”I  always want to orchestrate  to the arrangements that were in place and not get in the way of the vocals. Kay Starr is an amazing jazz singer. She is very much like a horn player, so I played off of that, interfacing with her phrasing. I used a similar band as with the Doris Day and Patti Page projects, 20 pieces plus strings with woodwinds in lieu of the brass. The frequency range of Les Paul’s guitar and Joe Venuti’s violin both occupy the area that is also the singer’s high end, so I avoided as many unison lines as I could and let her voice and the point-counterpoint with the instruments shine, orchestrating around that.” John Forbes’ subtle and tasteful arrangements never take away from the lead voices, adding to the timeless appeal of the performances.

Hindsight is proud to offer these unique collections that not only capture the spirit and feel of the Golden Age during which these recordings were made, but are, in every sense of the word, true collector’s items.

Kay Starr Bio:
Katherine LaVerne Starks, born in 1922 to a full-blooded Iroquois man and an Irish woman, began her singing career at the age of nine in Dallas, Texas on a local radio station in a weekly talent contest. That contest eventually became her very own 15-minute program where she sang pop-tunes and hillbilly music, earning three dollars a night and a lot of fan mail, as well. Kay Starr’s family moved to Memphis, Tennessee, where she got her own radio show on WREC called “Starr Time.” She was also a featured singer on the station’s “Saturday Night Jamboree,” which was one of its most popular shows at that time. It was at that time she changed her named to Kay Starr, due to the constant misspellings in fan letters. Her first big break came in 1937 at age 15, singing for bandleader and violinist Joe Venuti at the Peabody Hotel. He was so impressed with Starr that the gig lasted for three weeks and even some summer dates. It was Starr’s turn to see the world, and see the world she did. In June 1939, she received an offer to sing with The Glenn Miller Orchestra, the most famous band in the country at that time. She replaced ailing vocalist Marion Hutton and made her first recordings “Love With A Capitol You,” and “Baby Me” on the Bluebird label. Starr graduated from high school in 1940 and moved to California, where she continued to work with Venuti until 1941. By 1943, Starr was hired to replace Lena Horne in the Charlie Barnet Band and then signed to Decca Records, which recorded her bluesy rendition of “Share Croppin’ Blues”. Starr’s singing career was abruptly interrupted in 1945 when she caught pneumonia and collapsed during an Army camp show. She lost her voice and refrained from speaking and singing for six months. After her brief hiatus, Starr returned to the music scene with a deeper and huskier voice, which is becoming known as her trademark. Starr had no trouble in finding work. She moved to Los Angeles and her solo career began to take off. After making a name for herself in several Hollywood nightclubs, Starr was invited to sing on the Capitol Records label with Dave Dexter on the “Volumes of Jazz” series in 1945. She was then signed to a contract with Capitol Records in 1947, joining the likes of Peggy Lee, Ella Mae Morse, Jo Stafford, and Margaret Whiting. In 1950, her cover of Perry Como’s “Hoop Dee Doo” reached the number two spot on the charts, and the hits kept on coming with the 1952 release of “Wheel Of Fortune” which became the number two top-selling single of that year, earning Starr her first gold record.

In 1956, RCA Records signed Starr and produced “The Rock And Roll Waltz”, a million-selling gold record, the number two top-selling single in the U.S., and the number one single on the U.K. charts. That hit made Starr the first female with a top hit in the rock’n’roll era. As a solo artist, Starr returned to Capitol Records where she recorded jazz, blues, and even country. She toured the world with her unique style of singing, captivating audiences across the United States and England with her bluesy jazz repertoire. Starr was known for wowing the crowds in Las Vegas at big hotels like the Sands, Riveria, and Fremont Hotels, and at Harrah’s in Reno, Nevada. Count Basie took a liking to Starr, and the two paired up to record an album in 1968. Starr has a number of classic jazz recordings that are still overlooked which highlight her unique, powerful voice and the blend of emotion and substance in her singing style that allow her to tell a story which each song she belts out. Kay Starr has long been respected by the jazz community. Her musical style, which is still a favorite of yesterday’s generation, is now being enjoyed by up-and-coming artists today. Whether the genre is jazz, pop, country, or even R&B, Kay Starr has done it all, and has done it with style and class.

About Hindsight Records:
The thrilling discovery that there was a vast repertoire of Big Band music which had never been released to the public, led to the formation of Hindsight Records. When Wally Heider, a producer for the company, learned that the Big Bands had made recordings specifically for use on radio broadcast only and that these recordings had never been commercially released -he made it his business to track them down. It took him years, as part of his quest included getting permission from the band leaders or their heirs to release the recordings, he finally amassed a superb collection. Hindsight today has continued Wally Heider’s quest to release never before heard recordings, that not only include Big Band recordings, but many of the famous pop singers, Jazz artists and vocal groups of all time. The company has also made new recordings of current Big Bands and Jazz artists. What you hear on these recordings is not a re-creation of the original, but the real thing. The leading music historians were commissioned to write the brilliant, in depth liner notes you will find within each album. All these recordings capture the spirit and the feeling of the Golden Age of music, and in every sense of the word, true collector’s items. For more information visit  hindsightrecords.com.