Justin Ward began his career working in film development for Mick Jagger at Jagged Films, then went on to work under such talented directors as Robert Redford, Terrence Malick, Norman Jewison, James L. Brooks, Richard Donner, Ron Shelton and Jon Amiel. He has also worked with some of the most well-known producers in the business as well, including Arnon Milchan, Mark Tarlov, Patrick Markey, Gary Foster, Grant Hill, and Joel Silver. For 12 years, Ward produced and directed over 300 hours of sports, culinary, music and travel series for such networks as CBS, NBC, NBC Sports, CBS Sports, Spike TV, FOX, Fox Sports Net, The NFL, Warner Bros., Disney, and The Travel Channel. Ward also helped develop, direct and produce the documentary series “UFC Countdown,” and “UFC All Access,” and was the showrunner on “Inside the UFC,” all on Spike TV.

Ward’s second feature film, Relish, which he wrote, directed and produced, also under Ohana Films, Inc., has already won 20 awards, including Best Feature Film and Best Original Screenplay at the Madrid International Film Festival, and Best Drama Feature at the Burbank International Film Festival. The film will be released to over 60 million homes and on Amazon Prime in November of 2019.

Justin Ward: I started producing and directing in the theater. My career has mostly been directing and producing documentaries, but I have always had a love for narrative films. In 2017, I directed my first feature film The Meanest Man in Texas, and a year later began working with Terry on Relish.

THT: Tell us a little about your film Relish. 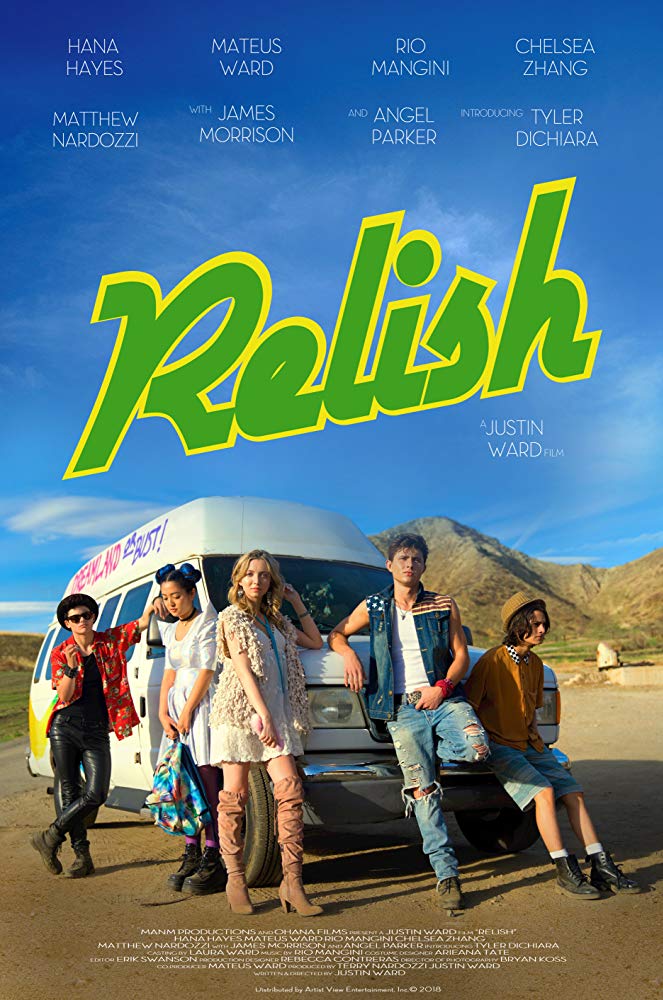 Justin Ward: Relish is a very personal film for me, and I am extremely proud of it. It was important to me to make a film that promotes inclusion and acceptance, as well as tackle some serious issues teenagers face today.

THT: Describe your film in one sentence?

Justin Ward: Lead by a rebellious transgender, five teenagers from different backgrounds escape a private treatment center and go on a life-changing raid trip and discover they have a lot more in common than they ever imagined.

THT: How do you see your film as an element for change?

Justin Ward: From the feedback I have received, a great deal of people seem to relate to this film in a several ways: many are moved emotionally to see someone like themselves represented on screen, that it tackles issues this generation is facing and they say it they love how it promotes inclusion. My hope with this film was that it would spark a conversation for change.

THT: What have you discovered about yourself during filming?

Justin Ward: That just because people say it’s impossible, that doesn’t make it so. I discovered that when you really trust your abilities, and your team, anything is possible.

THT: When was your first break?

Justin Ward: I have been fortunate enough to work with some incredible people over the years, who took a chance on me with no experience. Straight out of college, I had the opportunity to work for Mick Jagger as an assistant to his producer, where I learned a lot about how the film business works. Later, I was given the opportunity to produce and direct 52 hours of extreme sports documentary programming, based on a simple pitch deck I created and that gave me the skills to manage a large crew in different cities from around the world. In 2017, Brad Wilson took a chance to hired me to direct my first feature film.

THT: Did your upbringing influence your decision to direct/produce?

Justin Ward: I grew up in Eureka, California, tucked behind the redwood curtain. I never imagined living in LA directing and producing. However, recently I re-connected with an old friend from middle school. He reminded me how I used to run around in the woods with a super 8mm camera and filmed everything we did.

THT: When did you discover your love for cinema?

Justin Ward: As child I always loved going to the movies. In college, however, I studied theater and wanted to direct plays. It wasn’t until I moved to LA and started working the film industry that I started to develop a real passion for cinema.

THT: What is the best advice you ever received?

Justin Ward: I was working on The Horse Whisperer with Robert Redford and Patrick Markey. I was helping them do research for the film. I remember he told me, “Do what you want to do. If you want to act. ACT. If you want to direct. DIRECT. You can’t have a back-up plan. Because eventually your backup plan becomes your PLAN.” And because of that–and as scary as it is– to this day, I still don’t have a back up plan!

THT: Did you face any challenges in making your movie?

Justin Ward: Yes, we had three very big challenges: We were only given nine days to film Relish, with five main characters, and one of our leading actors had never acted in a film before. Having said that, the producer Terry Nardozzi, our consulting producer Brad Wilson and Bernie Gewissler, the UPM/Line Producer, did a remarkable job! It was a team effort and are all very proud of the film.

THT: What film are you most proud of?

Justin Ward: Relish. With this movie, I hope the idea that we should not place people in preconceived boxes. I am very proud we were able to offer a transgender actor the opportunity to play something other than a victim, or a stereotype, and characters where teenagers can see themselves up on screen for the first time. It is rewarding to have already received so much positive feedback about the film.

THT: What would people be surprised to know about you?

Justin Ward: When I was 16, I was awarded the Rotary International Exchange Program and spent a year studying abroad in Brazil. I still keep in touch with my Brazilian Host Family.

THT: What is next for you?

Justin Ward: I am always open to new experiences and opportunities… We have several projects with scripts that we are seeking financing on, so hopefully one of those projects will get funded.