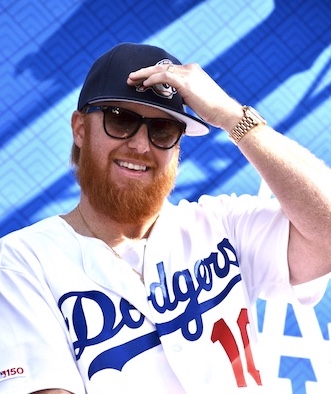 Turner is the Dodgers’ nomination for the Roberto Clemente award for the fourth time.

Los Angeles, CA, (The Hollywood Times) 9/15/2021–“I’m honored to be the Dodgers’ nominee for this award and be mentioned alongside Roberto Clemente, who showed us all the impact that athletes can make and what it means to give back to the community,” said Turner. “My wife Kourtney and I are humbled by this recognition, and pledge to continue lifting up people in need, especially our homeless veterans, and supporting our hospitals, schools, and youth sports.”

Justin Turner has been selected as the Dodgers’ nomination for the Roberto Clemente Award, baseball’s most prestigious individual accolade for Major Leaguers, for the year 2021.

The Roberto Clemente Award honors a Major League Baseball player who exemplifies the game’s values of exceptional character, community participation, charity, and good achievements both on and off the field.

Each MLB club nominates one player to be considered for the league-wide award in honor of Clemente’s accomplishments and character as part of the yearly event. For the fourth time in the last five years (2017-18, ’20-21) Turner is the Dodgers’ nominee for the award.

Turner has been deeply rooted in the Los Angeles community, donating his time, energy, and resources to a number of charity causes, notably the Justin Turner Foundation (JTF), which he co-founded with his wife Kourtney in 2016. The official goal of the Foundation is to help homeless veterans, children (and their families) fighting life-threatening illnesses and diseases, and different youth baseball organizations.

Turner is a regular at Dodgers and Dodgers Foundation community events, as well as area hospitals and the Dream Center, where his food bank was renamed The Justin & Kourtney Turner Food Bank in his honor.

MLB.com/Clemente21 has a detailed account of Justin’s dedication to the Los Angeles community.

The Nationals’ nomination for the Clemente Award is Dodger pitcher Max Scherzer, who was acquired by Los Angeles on July 30 after seven seasons with Washington.

The 20th annual Roberto Clemente Day, which was established by Major League Baseball to commemorate Clemente’s humanitarian legacy and to formally recognize Club candidates for the Roberto Clemente Award, will take place today, Wednesday, September 15th. The Roberto Clemente Day logo will appear on the bases and official dugout lineup cards as part of the league-wide event, and a special tribute film will be shown at ballparks.

Fans can also participate in the voting process.

Fans of the Los Angeles Dodgers adore Justin Turner. When he gets up to bat, he receives some of the loudest cheers and applause at the games.

Fans may vote for the Roberto Clemente Award starting today at mlb.com/clemente21.

Fans will be able to vote until the end of the season on Sunday, October 3rd, on the site, which will include biographies for each of the nominees. The winner of the fan vote will be counted as one of the blue-ribbon panel’s votes.

How did it all begin?

The “Commissioner’s Award” was established in 1971 to recognize Major League players for their humanitarian efforts. In 1973, the award was renamed the “Roberto Clemente Award,” after the Hall of Famer and 15-time All-Star perished in an aircraft accident on New Year’s Eve 1972 while attempting to bring supplies to earthquake victims in Nicaragua.

The following is a list of former Roberto Clemente Award winners: