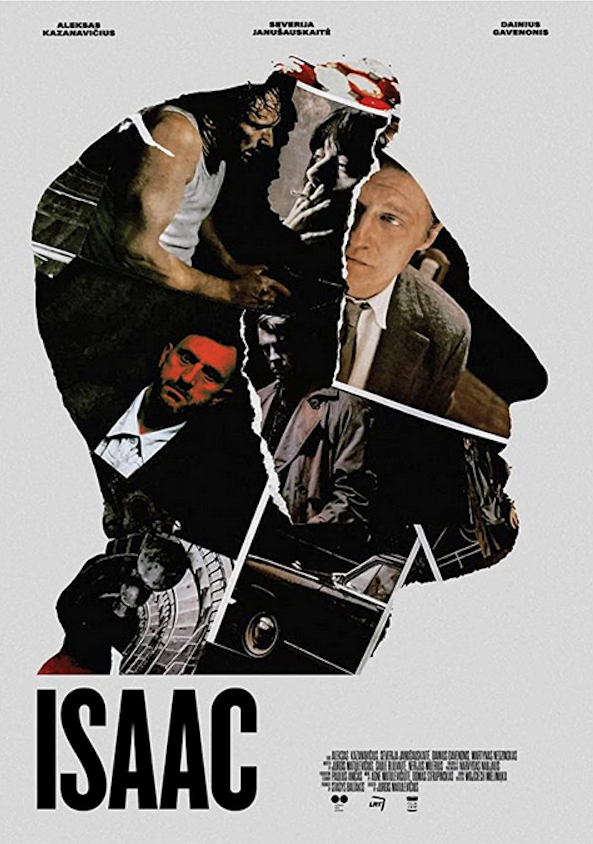 Isaac is based on a short story by Antanas Skema, a cult Lithuanian author with a surreal, stream-of-conscious style. For information, go to: https://www.sffla.net/

Divided into three acts, Isaac is a visually arresting drama about the lingering psychic trauma of totalitarian savagery and unresolved Holocaust guilt. The glamorous bed-hopping bohemians at its heart could almost have danced out of Fellini’s La Dolce Vita, particularly during a set-piece central party sequence in a grand villa. But the paranoid suspense plot that later engulfs them is pure Kafka, while the semi-derelict urban interiors that dominate the final act inevitably invoke the poetically ruined dreamscapes of Andrei Tarkovsky.

Matulevicius and his cinematographer Narvydas Naujalis shoot Isaac in a fluid, freewheeling style, with extensive use of elegantly choreographed traveling shots. They open with a bravura single-shot sequence which re-creates a notorious real-life World War II massacre at the Lietukis Garage in the Lithuanian city of Kaunas on 27 June, 1941, when an armed mob tortured and murdered between 40 and 60 Jews in front of a baying crowd, a savage taster for the incoming Nazi occupation of the Baltic states. One of the dead, Isaac (Dainius Kazlauskas), is casually killed by a young stranger who becomes caught up in the bloodbath almost by chance, his fate switching from potential victim to villain in the heat of the moment.

The story then jumps forward 23 years to 1964, deep in the Cold War, with Lithuania now under Soviet Russian control. A feted writer and film director, Gediminas (Dainius Gavenonis), returns from American exile to an effusive formal welcome from the communist puppet government, which exploits his homecoming for maximum political propaganda value. Gediminas has ambitious plans to shoot a film about the Lietukis Garage massacre, which Lithuania’s Moscow-backed authorities initially approve. However, one of the director’s old friends, boozy crime scene photographer Andrius (Aleksas Kazanavicius), is privately very wary about the film, his reservations rooted in his own guilty secrets. His doubts are exacerbated by his fragile, imploding relationship with Elena (Severija Janusauskaite), who is clearly attracted to Gediminas.

Meanwhile, ruthlessly driven young KGB officer Kazimieras (Martynas Nedzinskas) starts to obsess about Gediminas and his screenplay, working on a hunch that he must have personally witnessed the Lietukis Garage massacre to have written such an accurate re-creation. His determination to unearth the truth at all costs will eventually expose all the key protagonists to mortal danger, himself included.