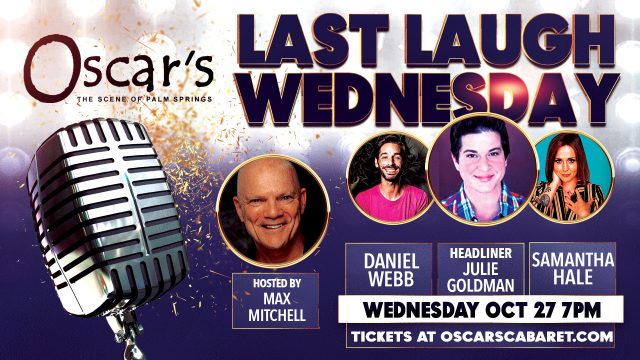 JULIE GOLDMAN‘s stand-up is delightfully in-your-face, honest and aggressively funny. Headlining throughout the US at clubs, colleges, festivals and events; she’s been described as “unapologetically un-PC” by Go Magazine “a hilariously irreverent, butch lesbian” by AfterEllen and an Anonymous fan writes “watching someone be outraged has never been so fun.”

Julie has been seen on everything from “Bravo’s The People’s Couch”, co-hosting “Vanderpump Rules After Show”, HBO’s Curb Your Enthusiasm, Logo’s Big Gay Sketch Show and has guest starred on a million shows, including Happy Endings and The Mindy Project.

Enjoy a little Julie with your politics, on hit podcast “Dumb Gay Politics with Julie & Brandy.” This comedy, political podcast hosted by Julie and her creative partner and BFF Brandy Howard is in the top charts every week with their crackerjack commentary and the only podcast that makes politics, easy, interesting, glamorous and fun.

Daniel famously garnered international attention cracking gay jokes with President Barack Obama. Featured at SXSW & JFL Northwest, he was selected as Comedy Central’s UP NEXT Comedians, made Vulture’s list of Comedians You Should & Will Know, and was a finalist for STAND-UP NBC.  thedanielwebb.com

SAMANTHA HALE, born and raised in Los Angeles, is following in the comedic footsteps of her grandfather, Alan Hale Jr., best known as The Skipper from Gilligan’s Island. Samantha likes to push boundaries with her material, and her debut album “Only Happy When It’s Raining Men,” released at number one on iTunes, and as a one hour visual special with Comedy Dynamics. She has become a fixture in the drag community, working with many of the girls from RuPaul’s Drag Race. She is a writer on “The Hater’s Roast Tour,” and has toured the world with her comedy. Samantha has been featured on “Laughs” on FOX and Hulu, EPIX, and is Co-Host of “The Pandora Boxx Show” on iHeart Radio.  samanthahale.com

Local comedian MAX MITCHELL hosts and produces Last Laugh Wednesday at Oscar’s the last Wednesday of each month. Mitchell has hosted and created shows at Oscars and other venues in LA and Coachella Valley. An award-winning filmmaker, he’s has performed stand up at Gotham New York, Yuk Yuk’s Toronto and Comedy Store LA to name a few. comedy-max.com

All shows are the last Wednesday of every month at 7:00PM. Tickets are $35 which includes a $10 Food / Drink credit. Doors open with dinner and full bar at 5:30pm. Oscars is located at the corner of Tahquitz Canyon Way and Indian Canyon, in the heart of Palm Springs. Dinner reservations call Oscar’s at (760) 325-1188.