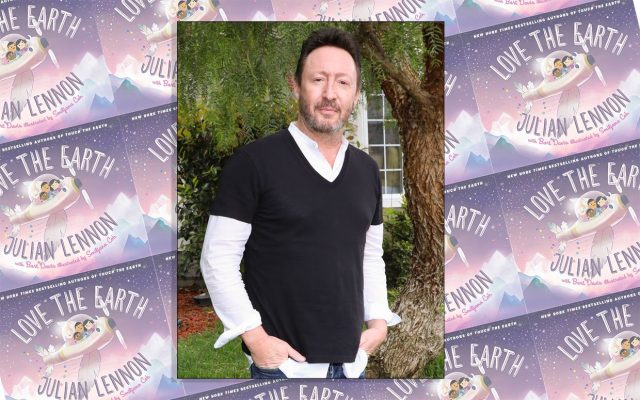 LOS ANGELES, California (The Hollywood Times) 5/1/19 – Grammy nominated musician, photographer, humanitarian and documentarian – Julian Lennon – was at the Grove on April 30th for photo-ops and signings for his final publication of the New York Times bestselling children’s books trilogy: Love the Earth. (Touch the Earth and Health the Earth complete the set.) Lennon has always cared deeply about our planet and the idea for his books came from being asked what he was doing for children after having founded an organization called White Feather Foundation.

Lennon said, “Many moons ago while on the road in Australia – I was met with an indigenous tribe and in a huge semi-circle they presented me with a huge white feather in front of 50 or more news crews, the whole works. The precursor to that is the fact that dad said to me, ‘If something ever happens to me in one shape or another the way I’m going to let you know that I’m going to be okay, you’re going to be okay and we’re all going to be okay, it will be in the form of a white feather.’ So, when I got the white feather it was to me, undeniable, you know…goose bumps. So, I thought what do I do here? I spent 10 years making a documentary about this indigenous tribe, started the White Feather Foundation to be sure they get money to keep their culture alive.’”

His friend Bart asked Julian what he would do for the kids. Julian was taken aback until he realized why not take the embodiment of the Foundation and place it into the book? He continued with, “So kids can learn about the world they’re growing into and ask why the ocean has plastic in it? Why don’t the people over there have anything like clean water?”  Lennon realized they had hit the nail-on-the-head in getting the kids attention – and the parents too – while bringing back his own wonderful childhood nap or bedtime memories. Lennon says, “Sitting there with my mum (the late, beautiful Cynthia Lennon) or my grandmother reading old Dr. Seuss or Rupert the Bear books and recalling their effect on me and going on this incredible journey.” It’s what good books successfully do.

The White Feather Flier represents a magical airplane that, once you’ve jumped aboard it, can take you anywhere you want on Earth. It’s an interactive book that immerses children with a fun and unique journey. It’s also interactive in that the children can plant milkweed gardens and soar with the butterflies, build schools where all kids are safe to learn and – better yet – to follow their dreams.

The book is dedicated to his mum as he had put up a very personal YouTube about Cynthia Lennon when she died of cancer just four years ago in April.

It has never been easy for Julian Lennon just to be himself, he was born into a legendary name without having the opportunity to truly know the legend behind the name. His parents divorced when he was just 5. He lost his father as a child, growing up, started to get to know him and then John Winston Lennon was assasinated. The media and music industry have rarely been kind to Julian. As a small child he recalled in one interview – that a Head Master introduced him as John’s son – which left little room for making friends afterwards. Yet, other privileged kids weren’t treated that way.

That he is so innately gifted in so many areas and always willing to forgive and move forward is a testament to his growth as both a man and human being and he gives enormous credit to his beloved mother who he lost April 2015. When he mentioned her, you felt the freshness from the loss of a very strong and loving bond.

Julian Lennon entered the roped off part of the store, took stage, center, was in command of who he is, has become and said he has 100 songs after he “gets some sleep” to finish writing as his friends are getting long-in-the-tooth (as he says he is) and there’s much to do. The crowd cheered as he appeared. Funny, serious, charming and entertaining… a Lennon through and through.

This writer who solo parented would love to interview Julian, more about Julian Lennon. He is immensely thoughtful in his words – showing a heart that has been touched by life – there is more that’s not been tapped into. The world grieved with him when he lost his father but it’s not the same. A young boy lost his dad more than once in his life and finally in the most brutal of ways yet that boy grew to be a man wanting to help heal the world. Maybe so he could continue his journey in healing himself.

You’re a remarkable one, Julian Lennon. For a man with no children of your own – there are many in this world who would beg to differ on that statement. He’s touching so many people’s lives, young and old and even the inbetweens. Bono praised on the back book jacket:

I’ve always admired Julian Lennon’s singing, because for all he has seen of the world, his melodies contain such childlike wonder… Buy this book, and his words turn into actions.

Buy the book if you have kids or not – it makes for a wonderful gift, especially for the new Mother’s to share with their child for Mother’s Day, which is just around the corner.

Julian’s Television Interview about the book