Los Angeles, CA (The Hollywood Times) 5/27/21 – They say there are no second acts in American life. In rebuttal, I offer you Julia Scotti. As Rick Scotti (originally Rich Gagliardi, but let’s not make this any more complicated than we have to), he had a modest career as a Borscht Belt-style comedian back in the 1980s. With a family to support, he gave up stand-up for more than a decade but returned to it in 2011, now in his 50’s…. and a woman.

And here’s the amazing part: As much as the business of comedy is inhospitable to women and openly hostile to anyone over 50 (never mind the whole trans thing), Julia has had more success than Rick ever did. She advanced to the quarter finals on America’s Got Talent in 2016 and, now pushing 70, is headlining clubs that young Rick could only dream of. 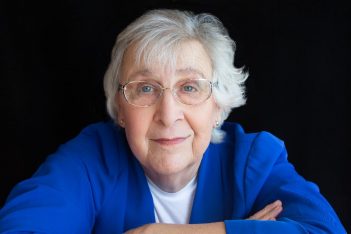 Why? Well, the material is better. The “crazy old lady of comedy,” as Julia calls herself, has had a great deal more — and more varied — experience to draw on than the callow Rick. “God, I was such a hack,” Julia winces, watching a video of her former self make a tired homophobic joke. Today, the jokes are sharp and specific: “I drove to Florida a couple for months ago,” she says from the stage, “I had to take a detour through Minnesota, because I’m not allowed to pee in North Carolina.”

This documentary, shot over five years by director Susan Sandler (winner of a Golden Globe for writing Crossing Delancey) with a lot of input from Dan Gagliardi, Julia’s comedian son, covers both the personal and professional sides of the Julia Scotti’s life. Half is the story of a middle-aged dad transitioning — think “Transparent,” without the production values — and half is the story of an unsuccessful comedian who found success at 60. The movie is more interested in the first story, the heartache of a man separated from his children for 15 years because of society’s fear of gender dysphoria. Distribution was timed for Pride Month, and the producers obviously want to capitalize on that angle. 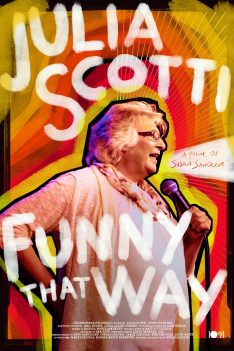 I actually liked the second story better. Turns out, the sorrows of a divorced dad turn are pretty standard issue, regardless of the gender presentation. I would have liked to see more of the drama building up to that appearance on “America’s Got Talent.” Getting the call, honing the act, worrying over the competition, biting one’s nails as the judges made their decisions… juicy stuff, you’d think. Julia may self-deprecatingly shrug, “It isn’t much to speak of, but it’s my life, and it’s important to me” but there is actually quite a lot to speak of.

The 73-minute doc actually seems longer than that as it meanders through Julia’s life. Performance footage and interviews are interspersed with home movies dating back to the 1950s. Cartoon animation by Sam Roth fills in some narrative gaps. Julia’s grown children are integrally involved, and there is some participation from one of the ex-wives. We meet Julia’s comic colleagues at one of those “comedians having sandwiches” gabfests. Some of the family footage is quite moving, but for entertainment value, there’s nothing like a smart funny person onstage being funny. Julia Scotti is older and wiser than she used to be, and she’s damn funny.

Produced and Directed by Susan Sandler