Los Angeles, CA (The Hollywood Times) 10/2/21 – Julia Ducournau’s body horror thriller Titane was awarded the Palme d’Or at the 2021 Cannes Film Festival. The film begins screening in Los Angeles at several Laemmle Theatres on October 1. This is Ducournau’s follow-up to her cannibal coming-of-age fable Raw (2016), Titane stars model-actor Agathe Rousselle as Alexia, an accident-survivor-cum-dancer with a titanium plate in her head who, in an early scene, inexplicably becomes pregnant after writhing around on the hood of a Cadillac. Eager to outrun her trauma by confronting her transgressors, Alexia embarks on a murderous rampage before deciding to erase her identity for good by posing (with the help of some self-inflicted bruising and body tape) as the missing son of a grieving father named Vincent (Vincent London), who seems willing to suspend his disbelief over the situation if it means making a flesh-and-blood connection with another human being. While not as conceptually daring or provocative as some of its forebears and influences – namely David Cronenberg’s Crash (1996) and the photography of Nan Goldin – it’s nonetheless a visceral and vividly composed exploration of queer family-making. 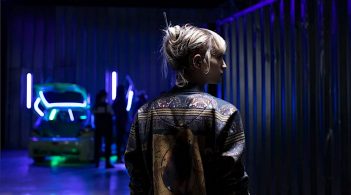 Clearly Titane is a film to be experienced and not over-analyzed. It shares a strange place in the psychological horror genre, like Lars von Trier’s Antichrist, Gaspar Noé’s Irreversible, and most obviously, David Cronenberg’s masterpiece of automotive anti-erotica, Crash. Not long into the French shocker Titane, 7-year-old Alexia (Adèle Guigue) is involved in a car accident that cracks her head open. She emerges from this trauma with a permanent grudge against her father (Bertrand Bonello) – bad dad, worse driver – and a large titanium plate surgically embedded in her skull. That plate is temporarily held in place by a metal brace that frames Alexia’s head like a halo, or perhaps a crown of thorns. Either way, the religious imagery is surely no accident. In the hands of writer-director Julia Ducournau, this knowingly transgressive horror odyssey is both a nativity story and passion play. The film is ripe with Biblical allusions and the overarching story becomes the parable of the prodigal son.

The adult Alexia (Agathe Rousselle, in a viscerally demanding role) goes on a wild rampage, ditching one father only to be pulled into another’s embrace. The movie’s first half-hour is a chain-reaction pileup of sadistic violence, nearly all of it meted out by Alexia, a prodigious serial killer (and promising arsonist) who likes to stab her victims through the ear with her hair stick. Alexia’s habit of penetrating human heads with metal – be that head of a male harasser or a female lover (Garance Marillier) – suggests a sexually charged need to reenact her own vehicular trauma. Alexia says almost nothing throughout the movie, but her demons are as apparent as the spirally surgical scars above her ear. By night she dons fishnet tights and dances as a car model, twerking atop a handsome vintage Cadillac for the drooling delectation of men. That public come-on is a mere warm-up for what happens in private: In the most attention-grabbing scene in Titane, Alexia proceeds to have sex with the aforementioned Cadillac. The Cadillac simply turns on the headlights, emits a few come-hither rumbles and waits as Alexia straps herself into the backseat and initiates her own frenzied joyride inside the car.

With stellar performances by Agathe Rouselle and Vincent Lindon, we seem to follow the actors to the brink of madness. The ability to engender sympathy for a cold-blooded killer is but one aspect of Rousselle’s astonishing, virtually wordless performance: With her ferocious physicality and stone-chiseled glare, she certainly makes you fear Alexia in all her murderous sociopathic rage. But she also makes you fear for Alexia, who can outrun the authorities but can’t escape the agonizing contortions and messy alien effluvia of her own body.

Alexia takes refuge in the home of a lonely, aging fire chief named Vincent (Vincent Lindon). There, she passes herself off as Vincent’s long-lost son, Adrien – a ludicrous yet fully sustained delusion in which they both willingly take part, and which fulfills their very different but equally profound needs. Cutting her hair and binding her breasts, Alexia trades in the over-sexualized femininity she once wielded with abandon. As she joins the studly ranks of Vincent’s junior firefighters, she enters a world where performative masculinity abounds (as does its close cousin, homoerotic desire). There is even an all-male dance by the firefighters at the station that seems to reference the hyper-masculinity of Claire Denis’ Beau Travail (1999) and, in that scene, the revelation of sex and gender fluidity.