Los Angeles, CA (The Hollywood Times) 11/24/12 – Screening this week at several Laemmle Theatres is a sharp and poignant documentary entitled Paper & Glue, a film by and about the legendary French artist JR, whose large-scale photographs have covered structures across the globe for almost two decades. Using his projects as a bridge to span our many cultural divides, the film explores art’s greater ability to challenge perspectives and unite communities. In JR’s Paper & Glue, JR turns the camera on his own work as he builds some of his most monumental projects. From early illicit graffiti videos captured on Paris rooftops at night to the US-Mexico border, to the favelas of Rio de Janeiro, to a current collaboration at a California supermax prison, the film follows JR as he turns these communities inside out, turning images of residents into eye catching and immersive art installations.

The spirit of Agnès Varda is felt throughout JR’s documentary Paper & Glue. A quote from her opens and closes the film, and there’s an occasional shot of the poster for Faces Places, her wonderful 2017 collaboration with JR. Varda’s films let the viewer make up their minds about her characters by letting them navigate the universes they inhabited. A similar alchemy is at work here; JR is famous for his enormous installations featuring pictures of everyday people, images he pastes almost anywhere using the titular objects. As the exhibitions are prepared, we’re taken on a tour of the subjects’ environments, from a favela in Brazil to the super-maximum security Tehachapi Prison in California. At one point, JR says that “art belongs to the people.” Then, through the representation of the people who make up his art, he shows just how true that statement is.

As JR explains it himself, “Paper & Glue is a film that challenges viewer’s perceptions by lifting the voices of people and places that are often overlooked. The film is the culmination of my years of work and includes an archive of photography and videos that span back to my adolescence. At the time of many of these recordings, I had no intention or awareness they could be used in this way. To have my work come full circle exemplifies the power of film, and the power of Paper & Glue.” In making this film, JR was assisted by his editor and friend, Keiko Deguchi and his producer Marc Benioff.

In several vignettes, JR is partnered with his longtime friend, Ladi Ly. The duo are kindred spirits due to their love of photography and their upbringing in the projects of France. JR came to public housing as an immigrant, feeling lost until he got his hands on a camera. Ly, the focus of one of JR’s most famous compositions, grew up in Montermeil’s Les Bosquets “B5,” the building that serves as the climactic installation in Paper & Glue. “It is the ghetto of all ghettos,” Ly says, and over the years, it was being dismantled to make way for newer housing. (Ly’s 2019 film about Montfermeil, Les Misérables, was nominated for a Best International Feature Oscar.)  “B5” is the last remaining remnant, and as a farewell, the two embark on one final testament to the people who once lived there. When the building is destroyed, these pictures will crumble along with the façade, a symbolic reference to the past.

Before we get to that, JR narrates his own history, focusing on several projects to show the methods to his madness. He mentions his need to document everything, which gives us access to some stunning videos and footage. Starting as a graffiti artist (there are startling pictures of him navigating roofs and other dangerous areas that taggers crave), JR graduated toward pasting gigantic pictures of anonymous people in unusual locations. The pictures are literally “in your face,” featuring the subjects making faces or looking at the beholder with a wide range of emotions. This engagement was often a protest, forcing the viewer to engage with a person for whom they may have judgmental notions. That famous picture of Ly features him holding his camera like a gun, daring folks to engage with someone from a place that non-residents did not dare to visit.

Paper & Glue is a film about process – full of scenes showing how things get done. One of the first works we see is a border wall installation that spans both the U.S. and the Mexican sides. JR talks to some border patrol guards who repeatedly answer any mention of the wall with “what wall?” In Tecate, Mexico, he finds a family willing to let him take pictures of their baby son, Kikito, in a playpen. This becomes the main feature of a very large installation that, shockingly, the border patrol allows to be built. Kikito looms large as he looks over the border fence. Underneath the mural, JR and his team build a table on the Mexican side so that people can meet and mingle. He devises a clever way for folks on the U.S. side to join in, turning his art into an international social event. 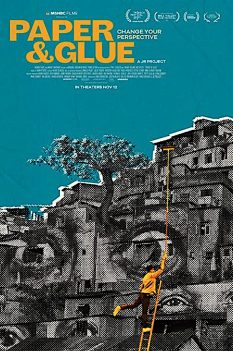 JR tells this story to an inmate at the prison in Tehachapi, California who asks what he plans to accomplish with the project he pitches to them. Here, he explains his mission statement of getting the marginalized, downtrodden and forgotten to tell their stories. The prison yard, where someone was stabbed two days prior, will be covered with pictures of this group. They’ll also be in charge of pasting the images. “I’m not a politician,” JR tells the multi-race group of inmates. “I’m not here to pass judgment.” However, the camera provocatively elicits a response when it isolates the “SKINHEAD” tattoo on the back of an inmate’s head. We also meet a man named Kevin, whose swastika face tattoo exists in jarring contrast with his soft-spoken demeanor and admissions of remorse. Still, more than one person notes how unusual it is for prisoners of all races to come together peacefully for this activity.

The closing segment on the Morro da Providência favela in Rio de Janeiro, Brazil, a powerful example of how JR has worked with communities of the forgotten and disenfranchised to make a difference through photography and empowering young people to use cameras instead of guns. The center of this segment is a respected resident named Rosiete, who brokers a deal with the neighborhood gangs, and scenes of the kids who become amateur photographers contributing to the piece. JR has these photos pasted inside the favela but also brings them outside, once again dragging people into the story of a place they’d avoid. Rosiete’s response to seeing her own face pasted on a wall is quite moving.

At first, I was reluctant to see this film but I am certainly glad that I chose to do so. JR, always seen with his emblematic sun glasses and hat, is brilliant at his art but also a powerful believer in our common humanity. After the film leaves the Laemmle theatres, it will still be available for viewing on the Laemmle Virtual Cinema website – so go check it out.