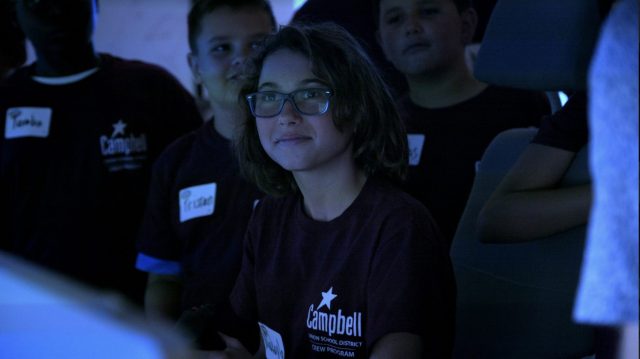 Fifty-two years ago, Astronauts Neil Armstrong and Buzz Aldrin became the first men to walk on the moon in what is considered one of the most incredible achievements of all time. Today, with NASA and the corporate space industry readying new missions to the moon, Mars and beyond, our future lies with the next generation of science, technology, engineering, and math (STEM) qualified individuals.

In the all new feature documentary ZERO GRAVITY, a diverse group of middle school students and their first-time coach each take an intimate and personal journey to space when they compete in a nationwide tournament to code satellites aboard the International Space Station. As a team, they grow from amateur coders to representing California in the ISS Finals Tournament — the culmination of a summer-long adventure that sees their incredible accomplishment performed by astronauts in orbit. Through their wondrous eyes, we see how opportunity and innovation breaks down walls and inspires them to reach beyond the stars.

The global competition – Zero Robotics – is run by the MIT Space Systems Laboratory in collaboration with NASA and CASIS. Its goal is to utilize the International Space Station for student experiments

in support of real-world problems facing space scientists today. Inspired by STAR WARS and retired in 2019 after ten years of space research, SPHERES are the satellites programmed by the gifted children in ZERO GRAVITY. Their journey, however, is about so much more than coding. It’s about the power of teamwork and the future of the human race as a spacefaring civilization.

Award-winning director, producer, and editor Thomas Verrette’s multi-layered narrative features a beautiful, original score by award-winning composer Penka Kouneva, vivid cinematography by Carlos Marulanda, and features astronauts Cady Coleman, Steve Smith, and Jack Fischer, who is aboard the ISS in the film. ZERO GRAVITY shows the true value of science in our society and is a testament to the impact of scientists, engineers, and educators on the lives of the next generation. This film is the first launch of a new initiative to incite and ignite actionable change in STEM education and outreach through masterful storytelling, empathy and the triumph of the human spirit, inspiring adults and children alike.

Ever since I was a kid, I’ve been fascinated with space and our place in the cosmos, but I never imagined I would ever be able to get there. These students not only took me with them on their journey to the stars, they left me with a renewed sense of hope for the future. In “Zero Gravity”, the goal of the competition was to build a GPS system around Mars, and with the recent Perseverance landing and the successful flights of Ingenuity on the red planet, there is no doubt in my mind we are transitioning into a new space age already. It’s our job to prepare and inspire this generation to build a bridge to a brighter future — they will be the ones who take the next giant leap for mankind. At 11 years old, they’ve already touched space, and I can’t wait to see where they take us next,” said Thomas Verrette, Director/Producer/Editor of ZERO GRAVITY