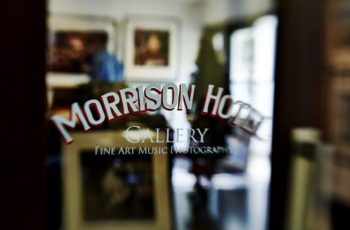 Hollywood, CA (The Hollywood Times) 11/16/18 – “Gary Burden and I went up to see Joni and do some pictures. When we arrived at her house in Laurel Canyon Joni was leaning out the window. Gary talked to Joni for about a half hour and I just started clicking away.”  Henry Diltz told The Hollywood Times at the Joni Mitchel photo exhibit.

Jimmy Steinfeldt: Henry can you tell me something about Joni Mitchell?

Henry Diltz: “When we went with Crosby Stills and Nash to take photos they had fur coats that Stephen had bought them to celebrate finishing the album. We shot the cover and then we wanted to get some photos with the coats. We took a limo up to Big Bear. Graham and Joni sat in the back seat of the limo with David on the side. I sat in the jump seat facing them and Gary sat in the other jump seat. Stephen sat next to the limo driver. After two hours they really forgot I was there. I was like a fly on the wall.”

JS: When you shoot a photo like this in a car with limited light inside how do you get the proper exposure?

HD: “I had a Minolta spot meter and I took a reading on their faces, on the cheek. On a shot like this I already knew approximately that the light would be 125 or 250 at 5.6 with Tri-X film.”

Jimmy Steinfeldt: Tell me something about Joni and this photo.

Joel Bernstein: “This is a photo I did on a frozen lake in 1976. I tried to get a shot like this six years earlier when she had a new album coming out. It was going to be called River which was a song she wrote about Graham Nash. In December of 1969 I was at a concert where she played it just after she wrote it. I went to her dressing room after the show and said I just love the song about the river and I see this picture of you skating down a frozen river with ice covered trees on either side and you’re turned around and pushing off with one skate and looking at the camera. She said that sounds great. She wanted to do that shot for the album. However I had to go back to school and she had to go to Europe. By the time we got together it was spring and no more frozen rivers. Also she changed the name of her album from River to Blue.”

“Six years later we are finishing a tour in Madison, Wisconsin. She’s broken up with her boyfriend John Guerin, fired the band, the tour is over. We’re in the beautiful hotel overlooking a blizzard on this lake. I turned to her and said “Joni we’re never going to be together again at a frozen lake or river and your wardrobe trunk is going back to L.A. tomorrow. Why don’t you pull out some black stuff and we’ll go out on the lake tomorrow and get that shot.”

“I wanted her to have black men’s skates to complete the silhouette. The man who rents skates refused to rent black skates to a woman. Joni had to get in his face to convince him to rent her the black skates. I was wearing shoes and sliding around. I shot about 3 rolls. At one point a crow flew over and cawed right above us. Joni is attuned to the natural world and so she lifted up her arms and cawed just like the crow and I got this shot! For me this photo is about moving on your own power toward the unknown. If you look close you can see the horizon even disappears. We have to motivate ourselves forward even if we don’t know what’s ahead for us.”

Jimmy Steinfeldt: Norman can you tell me something about Joni?

Norman Seeff: “Joni is a boundary dwelling artist. Meaning she lives on the boundary and always tries to supersede herself. Boundary dwellers are the true innovators. In the world of creativity you have a higher level of creator, the innovators. When I started to do my book I thought it was going to be a picture book. I suddenly realized that Joni had all the qualities that make up the boundary dweller. She was always courageous enough to try something new even if it was in a certain way threatening to her already successful career. She would go out and do what was new. She said to Cameron Crowe ‘If you stay the same they crucify you. If you change they crucify you. It’s boring to stay the same.'”

Make sure to check out my photos on my website: