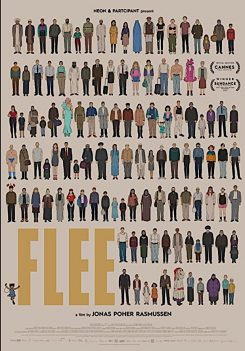 Los Angeles, CA (The Hollywood Times) 12/4/21 – Just opening at selected theatres in Los Angeles is Jonas Poher Rasmussen’s animated documentary Flee (Denmark, 2021) – a brilliant and moving film that has been selected as Denmark’s submission for Oscar consideration as Best International Feature Film in 2022. Written by Rasmussen along with Amin Nawabi, this is a haunting film, with many voices of the persons who only appear in their animated form. The film caught the interest of British Pakistani actor Riz Ahmed, who is the executive producer of Flee. In the film, Amin Nawabi (a pseudonym) recounts his story of having to flee Afghanistan as a child in the 1990’s in the middle of the night when his family were being chased by Mujahadeen. If they remained, they would have faced being abducted and killed, a fate that had befallen his father. He tells all of it to the documentation and artist Jonas Poher Rasmussen who reconstructs the story so compelling with animation. Even now Amin is still reluctant to tell the whole truth as there was a point in his life where he was desperate to be granted asylum in Denmark, that he told the authorities that his entire family had been executed and that he was the sole survivor.

Flee documents the unfilmable. Riveting testimony by Amin Nawabi (a pseudonym) fuels this odyssey of survival and acceptance. The 36-year-old subject recalls to his long-time friend, filmmaker Jonas Poher Rasmussen, the story of how he came to Denmark. It includes a tense journey in which his family escaped Afghanistan and the Mujahideen in 1990s, eventually landing in Russia, and survived off the grid once their visas expired. Being refugees who were forced to abandon their lives, Amin’s family could hardly have been expected to document their account. The same goes for the dangerous trips with human traffickers: One simply can’t bring cameras into the forests at the dead of night or into cargo holds of rickety ships.

What Amin can do, however, is remember them. He tells his story to Rasmussen in vivid detail, recalling aspects of his life he doesn’t even dare share with his fiancé. Flee uses the audio of Amin’s testimony as a springboard to animate the experience of surviving in liminal spaces. It visualizes the world of people like Amin and his family for whom being seen, observed, or documented can mean the difference between life and death. Flee transports audiences to dark corners of the world one never hopes to see in real life.

Using animation creates a safe space for Amin as the therapeutic interview session. We first see Amin lying down on a bed and telling his narrative with his eyes closed. Rasmussen lets Amin fully embrace and celebrate his identity as a gay man. (His memories of getting hot for posters of Jean-Claude Van Damme are a highlight, while the poppy soundtrack delivers an earworm discotheque.) Flee is the story of someone who was in hiding while hiding, carefully masking every aspect of his soul from the family members who shared a stake in his survival.

Having fled Afghanistan for Denmark as a teenager, Amin has kept the particularities of his past a secret even to his closest friends, including Rasmussen, who’s been close with Amin ever since he encountered him on a local train when they were in their teens. Having agreed to tell his story on camera, Amin begins by sharing his first memory – of bopping through the streets of Kabul to the buoyant strains of A-ha’s “Take on Me” while decked out in one of his sisters’ dresses – but no sooner has he begun his story than he shuts down. Even as an adult with a successful career and a loving relationship, he’s still not quite ready to lay himself bare.

We will come to understand that Amin’s reserved nature is both a product of his trauma and a self-preservation technique. As Amin later states, he’s shared his story only once before, to a manipulative boyfriend who used it against him. What’s to be gained by letting people into the messy, painful details of his life? That question receives a crystal-clear answer by the end of Flee, one that might seem like a tired pop-psychological cliché if it weren’t proceeded by a tale that’s told by Amin with profound self-awareness, subtle humor, and rigorous granularity. The point of sharing one’s story is not simply to let others in but to see oneself from the outside, to discover the ways in which the pain of the past continues to define the contours of one’s present, and to figure out how to break free of one’s own self-limiting cycles of behavior. 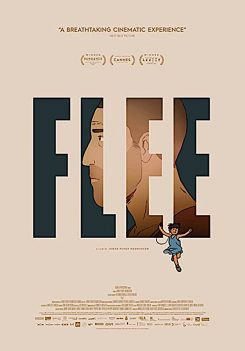 Archive footage is interspersed with artwork that reveals the story of Amin (a pseudonym) in a safe, yet open and affecting manner. His family’s escape from Afghanistan during the 1990s and subsequent dispersal over Europe via human trafficking routes is something he has never been able to speak honestly about, and in turn he has felt the burden of his trauma for many years. Flee pieces together an eloquent tapestry of his experience and offers Amin a poetic and profound resolution.

In one scene, Amin’s sisters and dozens of other refugees nearly die after being packed into a shipping container bound for Sweden. In another, dozens of desperate migrants, including Amin, are marched through a forest in the dead of night before being stuffed inside a small boat with no radio that gets stranded in the middle of the Baltic Sea during a torrential downpour. Eventually, they believe themselves to be saved by a passing cruise ship, only to be taken to Estonia where they’re held in dire conditions before being deported back to Russia.

These scenes evoke news images from the current ongoing migrant crisis around the globe, but Rasmussen wisely avoids making the parallels explicit. Rather, he allows Amin’s story to remain just that: an account of one person’s refugee story. The film’s epic scenes of perilous border crossings are ultimately less indelible than the small details specific to Amin’s life, such as the way a less-than-pure fascination with Jean-Claude Van Damme plays a role in confirming his sexuality. The way Amin’s homosexuality interacts with his migrant journey is often unexpected, inducing moments of doubt and self-loathing: Amin at one point asks his foster mother for medication to cure him of his gayness, but ultimately leading to the film’s most touching scene, in which Amin’s brother responds to his coming out by assisting him in finding a place where gay men hang out. When talking about his sexuality, Amin’s voice vibrates with warmth and good humor, as if it’s the one part of his identity that he’s fully come to terms with.