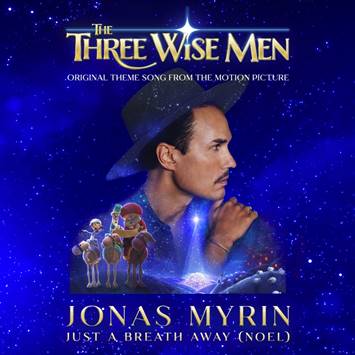 Following his recent single release of Not Alone, the highly sought-after songwriter and performer will also be the featured artist on Idina Menzel’s re-release of “At This Table,” co-written by Myrin, available at Target stores nationwide on October 30.

“Christmas is my favorite holiday of the year, so it was such an honor to write and perform the end-title and theme song ‘Just A Breath Away (Noel)’ from ‘The Three Wise Men.’ After one of the most challenging of years, may this song and movie bring comfort and joy this holiday – a reminder to the world that no matter what we are facing, hope is always greater – and it is only one breath away.”

“Just A Breath Away (Noel)” will be available worldwide for streaming and download, as well as heard over the end-credits of The Three Wise Men, told in rhyme by the legendary Andy Griffith, released via Reel FX Animation and Aspiration Entertainment.  Available via digital and at live events beginning November 27, the film was directed by Yarrow Cheney of the animated mega-hits The Secret Life of Pets and Dr. Seuss’ The Grinch.  Yarrow and his wife, Carrie Cheney, developed and produced the original holiday film, which was previously only available as a limited edition DVD under the original title The Very First Noel (originally released in 2006).  The Three Wise Men will be available in the U.S. on transactional video-on-demand platforms (TVOD), followed by streaming and live TheatriCast events that include special showings of the movie.  Check out the official trailer HERE. 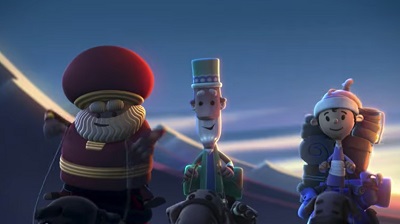 For more information on the movie visit: www.watchthethreewisemen.com

Myrin’s career highlights include writing and co-producing four songs on Barbra Streisand’s critically acclaimed 2018 album Walls; co-writing “Gloria The Gift of Life,” recorded by Andrea Bocelli on his collection Si (the first classical album to hit #1 in the U.S. and UK) and recently featured in the film Fatima;  and writing “Together In This,” title track from Jungle Beat: The Movie,” recorded by Natasha Bedingfield, which has had more than 16 million views on TikTok and over one million views on YouTube.

Other highlights include co-writing “At This Table,” from Idina Menzel’s holiday album A Season of Love, which became one of the most streamed original Christmas songs of 2019; co-writing with Nicole Scherzinger on “Victorious,” penning the closing song for the 2019 World Games at the Special Olympics in Abu Dhabi which was seen by more than 100 million people; and writing “Beautiful Life,” an international hit-single for Simon Fuller’s new global music band NowUnited, which has  topped the streaming charts around the world.

Jonas has also collaborated with Celine Dion, David Foster, Carole Bayer Sager, Jessica Simpson, and many others. Additionally, he has written songs for international icons around the globe from Brazil, Japan, Korea, Sweden, Germany, France and the UK including Vanessa Paradis, Gaëtan Roussel, Vanessa da Mata to Tohoshinki, and many more.  Launching his musical career in the early 2000s as a songwriter in London, Jonas made a profound global impact with 13 chart-topping anthems, and has won two Grammys.