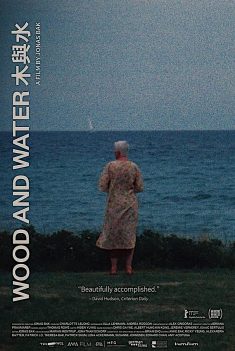 Los Angeles, CA (The Hollywood Times) 4/19/22 – Currently screening at the Lumiere Music Hall Cinema in Beverly Hills is Jonas Bak’s Wood and Water (Germany, 2021), presented by the L.A.-based itinerant Acropolis Cinema. Written and directed by Jonas Bak, Wood and Water is a semi-autobiographical depiction of modern alienation. The film focuses on a sixty-year-old widow, newly retired from a clerical job at her small-town church in Germany’s Black Forest region, who has just retired from her job and decides on impulse to visit her son, who lives in Hong Kong and has been offering excuses about why he hasn’t come home in three years. Anke is played by the filmmaker’s mother, and her unfussy manner and the clarity of mind she projects are some of the film’s assets.

The film unfolds through a series of echoes across time and space, starting with Anke (Anke Bak, the director’s mother), an elderly widow, walking around her beach house on the Baltic Sea reminiscing about the past before a montage of old photographs illustrates what she’s reliving. Pointedly, the most meaningful difference between the film’s present-day shots of the house and its grounds and the old photos is that Anke’s adult children dot the latter while the former are bereft of people.

Anke is a taciturn and reflective woman. To commemorate her retirement, she plans a getaway to the family beach house in the north of Germany on the Baltic Sea that will serve as a reunion with her children, only to receive a last-minute text from her son, Max, that he’s trapped in Hong Kong because of the government crackdown on pro-democracy protests. Though external factors clearly play a role in detaining him, Max’s siblings make vague references to his unreliability, and though Anke doesn’t clearly express any disappointment, her already withdrawn body language tells no lies. Using his mother as something close to a Bressonian model throughout Wood and Water, Bak mostly explores Anke’s reaction to her son’s latest absence through elegant compositions and editing that communicate the depths of her feelings lurking just beneath the placid surface of her life.

Those aforementioned echoes across time and space reverberate further when Anke resolves that, if her son cannot come to her, she shall go to him. The early emphasis on long shots of Anke and her hometown, which highlight the heavy intrusion of trees and foliage into all aspects of her surroundings, soon give way to glimpses of Hong Kong’s stark urban landscape. From opening scenes at her family beach house on the Baltic Sea, Anke returns to her Black Forest home and then decides to pack her bags and get into a car en route to the airport. Suddenly, the car enters a tunnel and the yellow, circular tungsten lights lengthen into strips of fluorescent white before the car emerges from a tunnel into the concrete jungle of Hong Kong, trees replaced by looming towers. The obscured cut between locations, and the tunnel being equated to a giant film strip, makes an abstract, metatextual gesture of cinema’s ability to bridge distances. This nearly abstract transition occurs with the accompaniment of an amazing score by Brian Eno.

When Anke arrives, her son is gone, presumably on some sort of business trip, and she is left to navigate the city on her own. She spends the first night in a hostel with a shared room because the concierge at her son’s high-rise apartment building has gone home. In the other bed is a young woman who is leaving the next day. Hong Kong is a place that the younger woman has loved and that she knows will be gone very soon. The political demonstrations in Hong Kong, she explains, take place quite near Anke’s son’s apartment. The son never appears, and for the next few days Anke wanders around, exploring a city that is nothing like the glamorized Hong Kong of Wong Kar-wai or of Hong Kong gangster movies. The streets are crowded, people walk fast but are never rude or unkind. Occasionally, she gets close to a massive demonstration, but usually, she hears the protesters at a distance or glimpses them from the window of her son’s apartment.

For Anke, to have ventured into a place that is totally unlike anything she’s known is liberating, but the film is suffused with melancholy because we know that liberation is the opposite of what is in store for Hong Kong, and that this modest but beautifully shot and edited film contains some of the last images of daily life in a free Hong Kong that we’ll ever see. It may well be the most candid look at the human rights protests in Hong Kong: from her hotel window, Anke gazes down at the throngs below and hears their shouts only as distant murmurs, for her thoughts are elsewhere.

The pensioner has flown all the way from the Black Forest to this embattled metropolis of Hong Kong to see her son. But he hasn’t showed his face and might well have very different problems of his own. Her figurative loneliness in her usual environment becomes more literal when she roams the dense streets near the protests, with the woman forced to speak English with the mostly older locals who offer her guidance and companionship. But in talking with the locals, Anke gradually comes to feel a spiritual connection to the place. And she comes to see her yearning as the expression of a greater human desire.

Bak is simply effortless to watch, she feels so utterly genuine and sincere that she can hold your attention no matter what she’s doing, or even if it’s nothing at all. She crosses paths with some interesting people along the way but in particular, Ricky Yeung’s activist and Patrick Lo’s doorman. There’s something about their interactions which create a simple but meaningful connection, a common understanding despite language and cultural barriers.

Wood and Water takes its name from a chance visit to a Hong Kong fortune teller, who explains though a retired former art teacher (Rick Yeung) that her past was shaped by water (as in the Baltic Sea) and she needs more wood in her life – a clear reference to her home in the Black Forest of Germany. Perhaps these two basic elements in the Chinese five elements theory help to explain the interactions of everything in the universe, but for Anke, is the reminder of her life up to this point. This is NOT a tale of the white woman “finding” herself in a foreign land. It is Anke’s open and honest curiosity that makes people respond to her and makes her come alive.

The high-rise apartment building of Anke’s son provides a bird’s eye view of the nearby street demonstrations that began in Hong Kong in June 2019. I was actually in Hong Kong myself the weekend of the first mass marches and witnessed the thousands of street protestors marching down the main streets of the city. I assume that director Jonas Bak must have been there in June of 2019 as well to capture that footage and also Anke’s reactions to it – both from the viewpoint of her son’s apartment and also directly on the street below. One of the characters in the film comments that this will not be the same Hong Kong in five years – an eerie projection of what the future holds for this urban metropolis. This is not a travelogue-shaped film at all, but an exploration of alternative realities – the quietude of the natural world of the Baltic Sea and the Black Forest and, then, the thronged, high-rise-lined, neon-lit Hong Kong streets.

It seems that Jonas Bak has drawn inspiration from Chantal Akerman and her News from Home (1976) and there are formal nods to the Japanese master Yasujiro Ozu. Bak’s reliance on long shots over close-ups consistently places Anke as just one figure among many, and the way that she’s always near the protests but never finds herself among the marchers highlights the film’s shrewd refusal to exploit very real political turmoil as a springboard for personal betterment. Bak’s decision to shoot using 16 mm celluloid is realized by cinematographer Alex Grigoras, who frames a succession of quietly assured compositions, using intensely slow moving, extended views which nicely reflect the pensive atmosphere.

Wood and Water asks us to reconsider what we mean by “home,” as if in a very German reflection of the sense of “dwelling” and being “at home,” themes prominent in the philosophy of Martin Heidegger. There’s something so beautiful about a film which can be confidently content in its quietude, and this is one of those films. It’s exceptional how well this film can capture your attention, it’s almost hypnotic, transfixing you on this kind, intelligent and independent woman. The story is simple in plot but dense in its layers of emotion, implications and cultural observations.