Los Angeles, CA (The Hollywood Times) 8/30/16 – Los Angeles has suffered record heat this summer, but  singer-songwriter Johnny Schaefer has been in full holiday mode recording an album of Christmas songs. From Here to Nativity is Schaefer’s sophomore project. In October of 2013 he released Acoustic Remedy, an eclectic mix of songs with a wide range of themes and musical vibes. The new album gives fans more of his creative songwriting and smooth, agile vocals.

Johnny just finished up two nights singing backup for Josh Groban at the Greek Theater in Los Angeles and is working with some terrific musicians on the new project. “I am crowd-funding this album, which gives me an opportunity to work with people like Stephan Oberhoff, who is currently co-producing with Quincy Jones and served as Melissa Manchester’s Music Director for a decade, Christoph Bull, who heads the organ program at UCLA, Grammy-nominated harpist Carol Robbins, Chad Ellis from the band Poe, the Passenger, and drummer Sean Winchester (Everclear), to name a few” Schaefer beamed. “It has been an incredible experience!”

The new album will be a mix of traditional favorites like Bring a Torch, Jeanette, Isabella, the Bach-Gounod Ave Maria and O Holy Night as well as a number of brand new original Christmas tunes. “It’s true to my form of trying new things” Schaefer added. “The Ave Maria will be a very straight-forward rendition because, well, you  can’t improve on Bach, but the other covers will be a little different from the usual settings. For example, O Holy Night  will be a jazz waltz with harp, bass and drums. It’s often a bit dirgy for my taste. We’re lightening it up.” 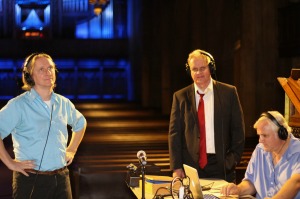 The inspiration to do a Christmas album came from the success of Schaefer’s single last year titled All the Babes on Christmas Born. “We released it late, but still got a lot of airplay. Marianne Williamson saw the video on YouTube and immediately called asking me to sing it at her Christmas Eve service in Beverly Hills. She told me that I was ‘A walking Christmas’, which is kind of true. I absolutely love Christmas and Christmas music. So it makes perfect sense for me to make this album.”

“I think the album will surprise a lot of people”, he added. “It’s a journey from Advent to Epiphany. Along the way the individual Christmas stories facilitate a huge range of sounds and moods. The last song is a Latin jam about the Rosca de Reyes (Kings Cake) popular in the Latino community.”  Schaefer is married to a Mexican immigrant, Paco Silva, who creates most of his music videos. “LA is the perfect spot to make an album like this. We’re a melting pot of amazing cultures and viewpoints. It’s wonderful. I take a look at that through the lens of the holidays. It’s a really fun ride.

Johnny’s Fundly campaign ends soon. From Here to Eternity will be available everywhere in October. You can find out more about the project at www.hearjohnny.com

Hear Johnny on the Put it Together Podcast http://putittogetherpodcast.blogspot.com/2016/08/episode-139-christmas-wish-johnny.html