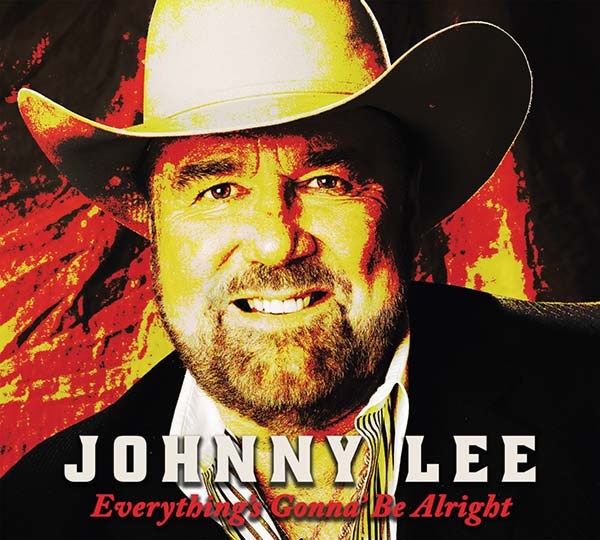 “I like the positive message. It reminds us that this too shall pass. Good luck Johnny and keep telling people that everything will be alright! Love you!” – Willie Nelson

“Great to hear not only a legend’s voice but a great friend singing on this album. It’s truly awesome! Love you Johnny Lee!” – John Daly, golfing legend

“I didn’t know how much I needed new music from Johnny Lee until I heard this magnificent, well-crafted new project. The veteran country star has plotted new turf as his matured and extremely sincere vocals take you on one journey after another. Everything’s Going to Be Alright? … indeed… If Johnny says it … I believe it!” – Joe Bonsall, The Oak Ridge Boys

“To say I’m excited about Johnny’s new release is an understatement. I’m so deeply honored that he chose to record a song that I wrote especially for his new album titled “I Know Me”. Him recording one of my songs is definitely a bucket list moment for me.” – Kelly Lang

“There are artists whose voices we all recognize the moment we hear them sing the first note of a song. My dear friend Johnny Lee is one of those great legendary voices that we all know instantly. His voice and talent has stood the test of time as people will see when hearing his new release. Love the album!” – T.G. Sheppard

“I’ve always been a fan of Johnny Lee’s voice and his ability to hold an audience in the palm of his hand, but his new album has renewed my appreciation for Lee as a songwriter. Originals such as “Annie,” “Highways Run Forever,” “Sawin’ on the Fiddle,” “Did You Enjoy Hurting Me” and the title track spotlight his gifts as a writer. And the bonus track, “Father’s Daughter,” written and performed by his daughter Cherish Lee shows the apple doesn’t fall far from the tree. It’s an outstanding album all around, a landmark achievement in an already impressive career.” – Deborah Evans Price, Sounds Like Nashville

“Johnny Lee is in great form on this new collection of songs, which features more of his own original writing than ever.” – Rick Moore, American Songwriter

“You can hear echoes of Leon Russell as Johnny Lee tackles “A Song for You.” Russell was known as the Master of Space and Time. Johnny Lee teams with Toni Jolene Clay to prove that this song is timeless.” – Jimmie Tramel, Tulsa World

NASHVILLE, Tenn. – Country legend and Urban Cowboy Johnny Lee, known for his dynamic stage presence and No. 1 smash crossover hit, “Lookin’ for Love,” will join popular radio host, Dallas Wayne on SiriusXM Willie’s Roadhouse Channel 59  Friday, March 19 at 5pm ET and Sunday, March 21 at 11am ET. This in-depth interview will highlight featured tracks from Johnny’s new album such as “Did You Enjoy Hurting Me,” with Willie Nelson on Trigger, “If You Drive Your Husband To Drinkin’” and the title track, Everything’s Gonna’ Be Alright by BFD/Audium Nashville and distributed exclusively through Orchard. 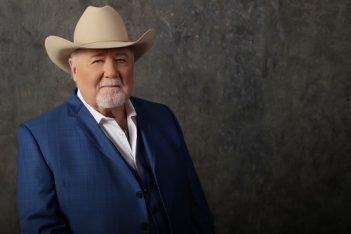 “It’s always a great time when Dallas Wayne and I get together! We go back longer than either of us can remember,” shares Lee. He was kind enough to feature a few of my new songs and share a few laughs too.”

“Since I first heard this great new album, I couldn’t wait to sit down and visit with Johnny Lee and hear all about the record and everything else he has going on,” says Dallas Wayne. “This is going to be a blast!”

A special lyric video for Everything’s Gonna’ Be Alright premiered on Taste of Country in January and each track was exclusively premiered by various outlets and is available on all streaming platforms at orcd.co/JohnnyLeeEverythingsGonnaBeAlright.

“I am thrilled with the response we have received on my new album, Everything’s Gonna’ Be Alright,” explains Lee. The fans are loving it! There are a total of fourteen songs that I hand-picked very carefully that truly reflect who I am today.”

Johnny exclusively shared with People.com about his recent diagnosis and ongoing struggle with Parkinson’s disease, and how he’s not going to let it keep him down. Read the full story HERE.

To watch the lyric video for Everything’s Gonna’ Be Alright visit HERE.

Last year marked the 40th anniversary of the hit movie Urban Cowboy starring Johnny Lee, which changed the dynamics of country music and catapulted it to the next level in pop culture. As part of the celebration, Johnny Lee reunited with Mickey Gilley for the Urban Cowboy Reunion Tour. In November at the 54th Annual CMA Awards in Nashville, both were recognized for their contributions to country music and Lee’s hit single “Lookin’ For Love” was featured and performed by Old Dominion.

The Urban Cowboy Reunion Tour will continue throughout 2021. Old and new fans will not want to miss the release of this one-of-a-kind legacy album! 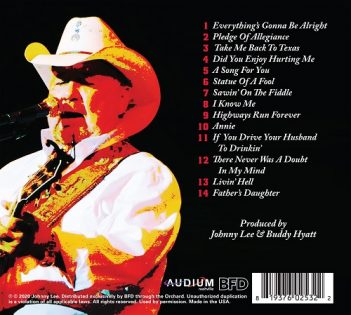 Johnny Lee was born in Texas City, Texas, and is a member of the Texas Country Music Hall of Fame. In 1968, he began a working relationship with Mickey Gilley, at the World Famous Nightclub “Gilley’s” in Pasadena, Texas. In 1979, Lee’s first screen role was in a 1979 TV Movie, “The Girls in the Office,” starring Barbara Eden and Susan St. James. He was then asked to perform in the film, “Urban Cowboy,” which starred John Travolta and Debra Winger. “Lookin’ For Love” was from that movie soundtrack, and became Lee’s first “Gold Record.” The song spent 3 weeks at #1 on the Billboard Country Music Charts, and #2 on the Pop Music Charts, later becoming one of the Top 100 best Country Songs of all Time.

When not traveling and performing, Johnny can be seen on many Celebrity hunting and fishing shows, as well as on RFD-TV’s “Larry’s Country Diner” and Country Family Reunions. Lee has had a string of Top 10 hits such as “One In A Million,” “Bet Your Heart On Me,” “Cherokee Fiddle,” “Sounds Like Love,” “Hey Bartender,” “You Could’ve Heard a Heart Break” more.