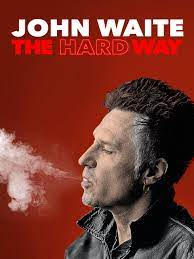 Los Angeles, CA (The Hollywood Times) 11/26/22 – Back in the day, with his shock of red hair and blue eyeshadow, and white skin,  John Waite channeled David Bowie.  Waite, The Baby’s lead singer, was a hot commodity in the 1970s. He was also lead vocalist of Bad English, and played with Ringo Starr’s All-Starr Band.  A new documentary “John Waite The Hard Way,” is set to be released December 6.

The film was directed by Mike J. Nichols and produced by Scott Wright. The two pitched in their takes about “John Waite The Hard Way.”

Nichols revealed a band that Waite was in, The Babys, was the first band to sign a million record deal and were cutting edge before MTV.  The Babys were “huge” on MTV because the beginning channel needed content.

Nichols, speaking to me by phone from Burbank, told me he directed the film.   Also, he was “writer, co producer and even editor, as it was during the pandemic, and all jobs ending up being done by me. You’ll see as the credits go up.

I was first fascinated with John with his song ‘Change.’  I worked on a lot of music documentaries including one on Frank Zappa.   In our experience making this film, we were making a new film out of a hard situation.  Art and music is to be shared with each other, and if we don’t, it’s kind of stupid to keep it locked away.  John didn’t want control of this film, he just agreed to do an interview, he didn’t watch it for three months, then took the lumps.  As a kid, he’d watch America on TV.  I wanted to present it (America) back to him.”

Nichols said the film was shot over 2-3 sessions in Los Angeles, then “the research, archival footage, editing, with skeleton staff on a low budget which took two years.”

Former DJ on the top-rated Z100 New York radio station Scott Wright (“Shadow Steele”) called me from Paris, France.  Wright said he first met English artist John Charles Waite when the hit “Missing You” was on its way to becoming No. 1 on the U.S. Billboard Hot 100 chart and in the Top 10 on the UK Charts.  Waite released 10 studio albums.

Scott originated this film project about the singer: “I thought it was interesting that he had a lot of hits but people didn’t know him.”

“He had later hits with his band Bad English like  “When I See You Smile”  but his biggest hits were his solo ones,” said Wright.   He explained that music documentaries aren’t cheap to make because of the writers, record companies, publishing companies and licensing agreements and rights.”

“John Waite The Hard Way” will be viewable on a variety of platforms, Video On Demand and to be released on DVD. The official trailer is on You Tube.