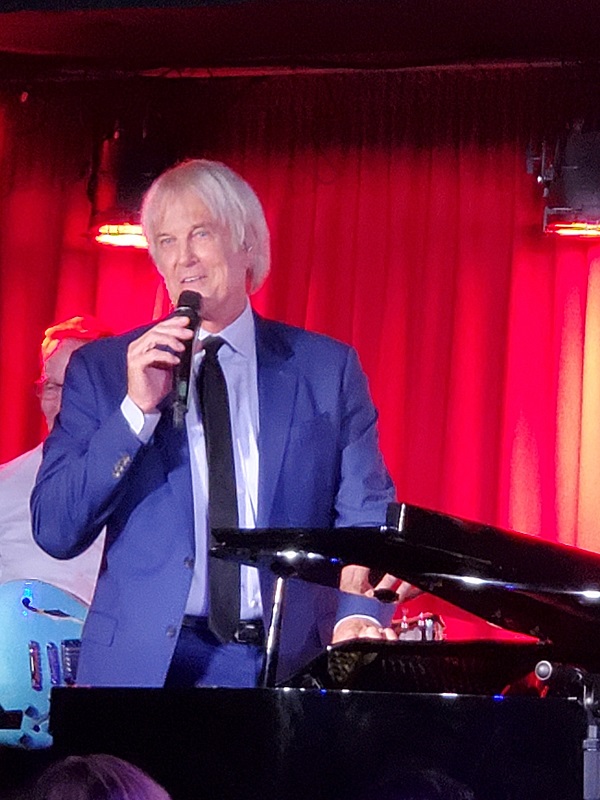 The performance, named Songs and Stories from the Grand Piano, was just that.  John’s band members all walked up on the stage to take their place and out of know where John Tesh strolled through the audience to make his way to the stage.  But before he strolled onto the stage there was a special appearance by John’s son and radio show co-host, Gib Gerard.  Gib came out in a striking blue suit and was MC for the night.  He is really a funny fella as well as good looking.

The audience was delighted to a musical journey through John’s 30-year career, which so far encompasses seven public television specials, eight million albums sold, four certified Gold records, two Grammy nominations, a string of #1 radio hits, a Keyboard Magazine Performance award, music composer for the Barcelona and Atlanta Olympic Games on NBC, and John’s composing what has been hailed as perhaps the greatest sports tv theme ever written, “Roundball Rock,” for the NBA.

This is what my friend Susana Willie, who came with me, had to say about the venue:

“The venue was an friendly intimate atmosphere. Space small enough to offer good sound in proximity to the stage.  Food was delicious. The Dover Sole had a smooth and creamy texture. The orzo had a bit of an aldente bite to it. The dessert, cannoli was creamy with bits of shaved chocolate.” – Susana Willie

The food at Vitello was delicious and the presentation was beautiful.  I had Mediterranean Sea Bass with crushed almonds on top and orzo.  Devine!  It was wonderful to have dinner upstairs in this intimate setting. The waiter we had was amazing and we never had an empty glass of ice tea and water. We also made a new friend, Fawna Wright, who just happens to live locally. She had purchased John’s new book.  It was nice talking with her and she said she a fantastic time at John Tesh’s concert.  We love her glasses!

The Hollywood Times had the opportunity to speak John Tesh about his upcoming concert, his career and a few laughs along the way!

Throughout the show, John shed some light on the pivotal moments in his life and career – such as going from homeless to anchoring the CBS News in New York, why he left a decade-long dream gig on national television to pursue music, the story behind that infamous Red Rocks Live taping in the driving rain, and how he overcame his recent battle with cancer.

It really was an awesome concert with amazing jazz music, storytelling, photos and laughter.  I really loved when John talked about his cancer diagnosis and that he was told to get his stuff in order and he and his wife Connie said NO! They were going to look forward to God’s guidance with prayer, music and talking.  It was really cool that John’s new doctor was there in the front row and John thanked him for being there for him.  We all clapped!

John told a story about having bad teeth and wearing braces and even a head gear made by his father.  The photo on the screen helped to tell the story, which John did that with several of his stories.

I have included some of the music performed that night.

Gib came back out to sing “Hallelujah” and “Over The Rainbow” while playing his ukulele. Beautiful!  All of us in the audience sang along, priceless!

After the concert, John put on his face mask and greeted his fans with fist bumps, hello and thank you.  I was able to introduce myself as Judy Shields from The Hollywood Times and John, without skipping a beat, said, “oh ya, I remember you, you were this big in the interview” as he used his hands to make the size of a laptop screen!  Too funny. He thanked me for the interview and for coming out and I told him he was amazing and should be proud.  He said thank you.  I was also able to get his autograph on his book that he left for me.  I can’t wait to read it.

I introduced my friend Susana to him and told him she was the one that won the new iPad and he said well that was cool. 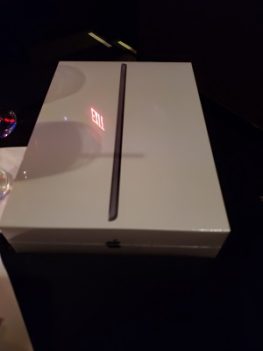 Before the concert, Gib had given away John’s DVD from Red Rock, a CD and an autographed copy of John’s book.  They also asked us to text TESH to a certain number so we would have a chance to win the new iPad, so Susana and I got busy sending off that text.  They gave the iPad away towards the end of the concert and my friend Susana won it.  We both went wild and the cool thing was that she didn’t have one.  When her name was shouted out, we both looked at each other with amazement in our eyes. Way to go Susana!

For the past 45 years John Tesh has been internationally recognized as a journalist, composer, broadcaster, and concert pianist. His Intelligence for Your Life radio show currently airs on 350 stations and reaches 14 million people each week. John’s highly successful and varied career path also includes six years as a correspondent for CBS News, a ten-year run as anchor on Entertainment Tonight, broadcast host and music composer for the Barcelona and Atlanta Olympic Games, induction into the National Radio Hall of Fame and the North Carolina Music Hall of Fame, and the unique distinction of composing what critics have hailed as “the greatest sports theme in television history” for NBC Sports basketball. John’s live television concerts, including the seminal “Live at Red Rocks,” have raised millions for Public Television.

In 2020, Tesh published his memoir, Relentless: Unleashing a Life of Purpose, Grit, and Faith.