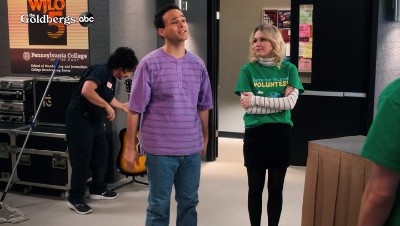 Rock and Roll Hall of Famer John Oates, from the rock duo Daryl Hall and John Oates, will guest star in an all-new episode of the ABC-TV hit comedy The Goldbergs on Wednesday, April 22 at 8 p.m ET on ABC.
The duo’s song “Kiss On My List” is the episode’s featured musical selection.

In the episode entitled “Oates and Oates” Barry (Goldberg) attempts to woo Ren, the girl of his dreams, when he over promises he can get Hall & Oates to perform.

“Daryl Hall and John Oates were my favorite musical duo from my childhood and a major part of the soundtrack to my life,” said Adam F. Goldberg, executive producer, The Goldbergs. “Their songs dominated the ’80s while I was growing up in suburban Philadelphia where both Daryl Hall and John Oates are from. While we have featured their songs and referenced them in previous episodes, we are taking it to the next level this time around as John Oates, who is a fan of the show, is appearing in the episode. We are thrilled to have him join us.”
Goldberg often takes “totally surreal” moments of his life, his favorite artists, and celebrities, and incorporates them into his two prime-time sitcoms, The Goldbergs and Schooled, both air on Wednesday evenings on ABC-TV and both based on his life of growing up in a suburban Philadelphia home in the 80s and 90s.
John Oates sat down with Variety this week to discuss his appearance on the show. “The cast was amazing. It all happened so fast,” says Oates, who flew to L.A. from his Nashville home with 24 hours’ notice to film his scene. He was back in Tennessee within hours of wrapping. “Luckily the timing all worked out for everyone. It helped that they had a synergy in how they’ve been working together for a long time. Hayley Orrantia, [who plays Erica Goldberg] helped me with feeling comfortable.”
SEE BELOW FOR A PREVIEW OF THE EPISODE:
https://www.youtube.com/watch?v=xegbSGINrh0&feature=youtu.be&ab_channel=ABC
“Kiss On My List” was the third single release from Hall & Oates’ ninth studio album, Voices, and became their second US Billboard Hot 100 number-one single. It spent three weeks at the top spot.
“Oates & Oates” was written by Alex Barnow and Chris Bishop, and directed by Lew Schneider.
Adam F. Goldberg, Doug Robinson, Alex Barnow, Chris Bishop and Annette Davis are executive producers. “The Goldbergs” is produced by Happy Madison, Doug Robinson Productions and Adam F. Goldberg Productions, in association with Sony Pictures Television.