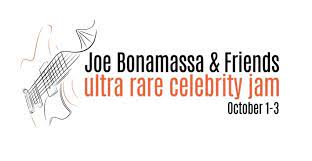 The event will take place this weekend, from October 1st to October 3rd. The Columbus Children’s Foundation will be hosting The Ultra Rare Celebrity Jam with legendary blues guitarist Joe Bonamassa. The foundation’s ultimate objective is to bring the community together to raise money and awareness for children with ultra-rare genetic diseases.

Taking place at the iconic Sunset Marquis in West Hollywood, The Ultra Rare Celebrity Jam is an exclusive weekend and an opportunity as rare as the children it is benefiting. Aside from a live performance by none other than Joe Bonamassa, he will be joined by John Oates of Hall and Oates, Billy Bob Thorton, Keb Mo, Jeff Barry, Emmanuel Kelly, and more. Considered one of the world’s greatest guitarists, Joe Bonamassa has been featured on the cover of every guitar magazine multiple times.

Bonamassa’s involvement in the event should come as no surprise, as the guitarist has a passion for helping those less fortunate. When initially brought on board, Bonamassa spoke with Ultra Rare Jam’s producer, Mark Rosenberg. He made it clear that his passion was always there, as he shared, “I was touring with BB King at 12 years of age and each note seemed to bring my future closer to me. If I can bend a few strings over a weekend that can help change a child’s life, it is worth every minute of my time to bring a brighter future closer to them.” – Joe Bonamassa. From the very start of his career, Bonamassa has made it a personal mission to better the lives of others using his talent, resources, and a large following. He is now able to put his mission into place by being part of something so impactful.