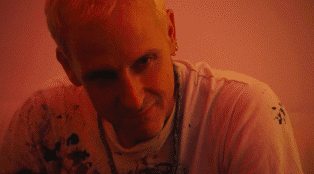 Written and directed by Michael M. Bilandic, Jobe’z World is a surreal dark comedy about a night in the life of the titular Jobe (Jason Grisell). Jobe spends his days as a rollerblade bound drug dealer cavorting with assorted oddballs and miscreants until he is given a special assignment to deliver a powerful narcotic to his favorite A-List science fiction actor, Royce David Leslie (Theodore Bouloukos). After Royce’s accidental overdose on the drugs Jobe sold him, Jobe is plunged into city spanning odyssey dodging distraught fans, police, and paparazzi alike.

Jobe’z World begins with credits running over a flurry of colors and wailing psychedelic synthesizer drones. We are introduced to Jobe as only a voice amongst the dreamscape, his inner monologue, he relays deep musings about the cosmos and the scale of the universe but also lacks the diction and demeanor to properly express them. His words are seemingly profound and appropriately solipsistic, but his interest in science fiction movies, partying, comic books, and drugs are more telling of his character. Jobe might seem lackadaisical and scatterbrained, but the people he sells to are leagues more unhinged. This unpredictability constitutes much of the film’s initial appeal, with each scene containing the possibility of a new misfit joining the eclectic cast of Jobe’z World. This comes to a peak when Jobe finally meets his idol, actor Royce David Leslie. By the midpoint, Jobe seems to have met his soulmate in the rambling and self-infatuated Royce, who takes an interest in Jobe’s self published manga titled “Celestial Steven: Space Raver” shortly before the unfortunate overdose.

Despite it’s touted microbudget, Jobe’z World is still able to achieve a definite sense of style. The mostly realistic setting and intentionality of the direction keep Jobe from feeling like a Kyle Mooney character and more like a grounded portrayal of a burnout with more potential than he realizes. The majority of the film, especially the interiors, are bathed in a distinct neon hue that adds to the surreal nature of the story as a whole. Dialogue is shot almost exclusively in close up and with a kind of drunken sway that adds to the drug addled sensibilities of the characters involved but may seem inappropriately intense at times.

Unfortunately the defined aesthetic and well realized artistic vision of the film may not ultimately work in its favor. Jobe’z World seems to be trying to strike a vein through cult appeal, but may not be funny or incompetent enough to stick in audiences’ mind as a timeless cult classic. Additionally, some scenes last longer than they need to in what started as a fairly briskly paced film. These overdrawn sequences become more and more prevalent as the story continues and rob Jobe’z World of the tension it had previously built up. Long, rambling, and borderline insane monologues can suck all of the momentum out of the story just after it seems to get rolling. The stakes build to a distinct point of tension a little over halfway through the film but then fail to escalate any further and even de-escalate, causing the film to fall flat by the end. Furthermore and finally, Jobe’z World concludes with a bit of a non-ending, failing to complete any of it’s hanging plot threads and not providing a satisfying arc for the main character. Though it’s visuals, brief runtime, and utterly bonkers premise can easily suck curious viewers in, Jobe’z World doesn’t ever truly lose its mind or build to a satisfying conclusion and is skippable as a result.