Paris Chong – curator: This is a show called Light and Water. I’m proud to use the space of Charles Arnoldi and I worked with his daughter Natalie, and Laddie John Dill. I curate for Leica Gallery LA where we show Leica photographers. It’s nice to do something different and incorporate photography with painting and sculptor which I also love as an art curator.

Margaret Hyde – Artist: I’m from Memphis. I started doing photography at age 10. The first time I saw an object turned into art was Eggleston’s tricycle. I didn’t know you could do that. I learned traditional photography; film, dark room, etc. I really picked up photography seriously in my 30s. I did documentary work on film crews and went to Bhutan, and Liberia. Then I had my 4th child and I couldn’t travel.

One day I was walking my child to preschool in Santa Monica and I saw someone draining their swimming pool. I noticed the beautiful reflection of light on the water in the street. I grabbed my camera and shot it with a macro lens. I build little tiny sculptures less than an inch tall and then I drop water on them. I photograph them using natural light over time. Once I have an image I like I make a three dimensional file and make a cast of my waterdrops. My work goes from sculptor to image back to sculptor again. I love the play on scale. The play on the initial sculptor is meant to be ephemeral. 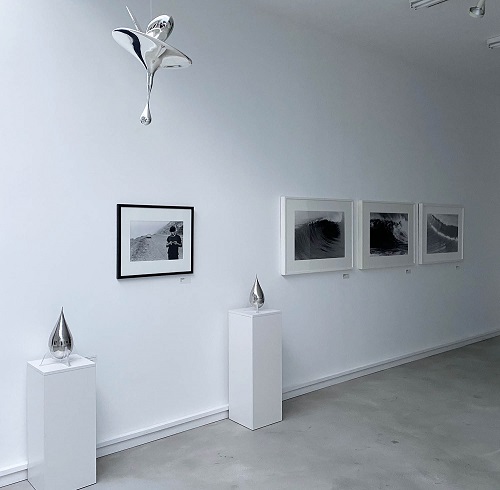 I cast in resin and then cast in chrome. Waterdrops will hold their tension for a long time. I don’t need a tripod. I’ve held my camera sometimes for 20 minutes to get the photo I want. It builds up my arm muscles. I get amazing reflections. I’ve had things that look like ghosts or animals. People sometimes think I photoshopped them but they really just came out that way. I think water takes on everything it has passed through. Water has passed through you, me, everything. Maybe we make impressions on it. Maybe I’m photographing the energy of where that water has been.

This show it was about light and water. Essential elements. Also all my work has had a philanthropic element to it. This show is benefiting Vision To Learn which helps give eye glasses to kids. Laddie John Dill has been my mentor for 30 years and he’s here at the show. He’s a pioneer of the light space movement. He has four light pieces in a special room in this show. It is very unique for him to be in a group show and I’m so happy he’s here. Next week we are doing a talk with many of the artists. http://leicagalleryla.com/upcoming-exhibitions/

Anthony Friedkin – Artist: I have a series of photographs of waves I’ve been doing for 30-40 years. They are like liquid sculptor, ethereal beauty. When waves are frozen by a photograph you really can appreciate their shape. Also the tonality of waves is important to me. I’m a black and white guy. Waves represent the universe. There are waves of energy throughout the universe. Ocean waves are an example. The sun creates all our weather systems and the storms created out in the ocean create the waves we see. I pick beaches where the sun is at an angle to the waves where the wave will reflect the magnificence and brilliance of the sunlight. You see the actual reflection of the sunlight on the face of the wave. This acknowledges that the sun created the wave.

An ocean wave starts far out on the horizon then it turns into a bit of a corduroy and then becomes a perfect circle which we call the tube or the cathedral. Surfers say “Oh I got in the cathedral.” Eventually the wave comes up on shore and all its energy has been expressed and it goes back out into the ocean again. When a wave breaks it’s a critical, magical moment. That’s what I’m trying to capture. They are timeless. Whether I shot it last week or 30 years ago no one will ever know. If you do a cityscape and there is a 1965 Mustang in the photo you know approximately when it was shot. Waves are like snowflakes everyone is unique. If I get 2 or 3 keepers each year I’m happy. You need the right swell direction, the right tide, and the wind has to be just right. After 30 plus years I probably have 25-30 images in my portfolio.

The ocean is supposedly where all life started on the planet. 2/3 of the world is water. Surfers engage in nature in a very profound way. It’s a very individual one-on-one kind of thing. It’s not a team sport. It’s about one individual on one wave.

Jessie Diamond – Artist: Paris has a great eye and she know how to make exhibits work with photographs as well as other media.