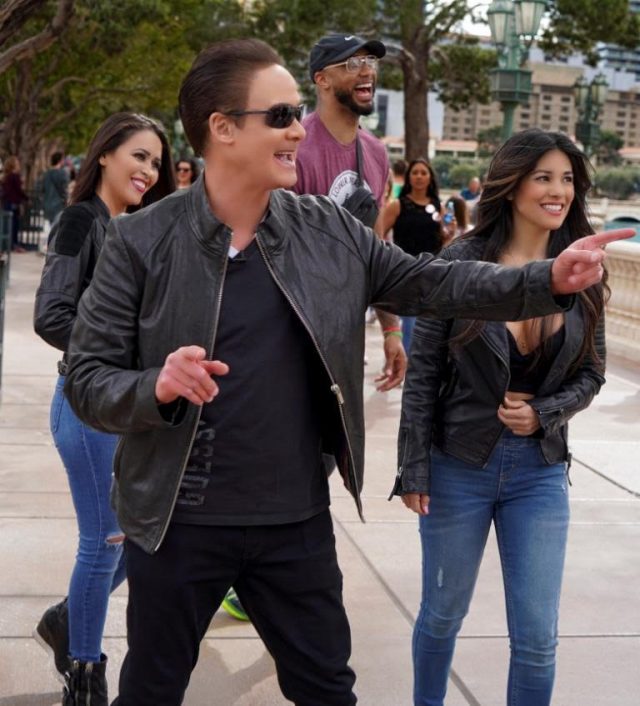 JIMMIE LEE-THE JERSEY OUTLAW AND HIT COMEDY REALITY TV SHOW, DANGEROUSLY FUNNY CONTINUES INTO FALL SEASON 3
“Dangerously Funny”  owns up to its name with” politically incorrect” , no holds barred, 80’s style comedy.  It is superbly entertaining, high energy, over the top comedy that creates pandemonium from East Coast  to West Coast. The show is rated one of the best comedy TV shows, with The Jersey Outlaw at the center of the action. Jimmie Lee delivers a unique brand of street comedy, that combines one liners, insults, zingers and more, not always politically correct,  but mostly good natured, into ad-lib uncensored skits. The show has caught on like wildfire with viewers all over the country, and now in select cities in Europe. The show is currently on TV, Amazon Prime and YouTube.
Jay Cohen from the Las Vegas Sun, who has followed Jimmie from the start, states  it best…”Pure pandemonium and mayhem, no holds barred, uncanny, unpredictable, zany and pure entertaining”.
The show has already filmed this year in Vegas, New York City, Atlantic City,  Rome and Paris.  Upcoming fall shoots are scheduled for  Vegas  Part 2, South Beach, Hollywood, and Chicago.
Jimmie Lee performs his schtick on the street with security guards and models, and performs in dark sunglasses and a black leather
jacket.  He’s a real character with a huge persona that  creates a scene wherever he goes.  People gravitate and wanna see what he has to say, and Jimmie always delivers the funnies. Nobody is safe when The Outlaw hits the streets.
The Jersey Outlaw is the talk of the town in Hollywood.  Press and Media surround Jimmie and wanna know the secret for the show’s success and longevity. “I am doing something very unique and different that people don’t do anymore, old style comedy 80s style. The people don’t expect any of it, so they immediately engage and love it ;  its very high energy and very captivating”, says Jimmie Lee.
Jimmies comedy is an old school Vegas style,  that combines elements of Rickles and Dangerfield,  with a unique style, smooth delivery and some Jersey attitude. The kids got charisma and a touch of class.  Ripley says , ‘Believe it or not, Jimmie Lee’s a funny guy”.
Fans can expect in Season 3,  more laughs , new jokes ,new venues unexpected antics and a lot of fun, from yours truly, Jimmie Lee.
For more on Jimmie Lee, go to YouTube-Jimmie Lee-The Jersey Outlaw,  Instagram – therealjerseyoutlaw, and Facebook-Jimmie Lee.