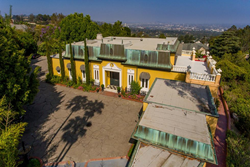 “Asking $1 Billion in LA”
The ultimate Beverly Hills trophy property is for sale at $1 billion, and it is all land and trees. No mansion, tennis courts, golf course or swimming pool, the 157-acre property is located on the highest piece of land in Beverly Hills with views of Catalina Island, Downtown Los Angeles and Santa Monica.  Previous owners of the undeveloped land include the sister of the Shah of Iran, Merv Griffin and Herbalife founder Mark Hughes.

“Happy Days Again For House Owners”
With an improved economy and housing prices recovered in much of the United States, home owners are cashing in at the highest levels since 2005. According to Attom Data Solutions, home owners who sold in the second quarter of 2018 had an average gain of $58,000 – the highest level since 2007. In 2005 at the peak of the home market, the average sale gain was $89,780, but by 2009 the average seller lost $58,735.

“The Brady Bunch House Is For Sale”
The Los Angeles split-level house that was the TV home for the exterior scenes of the 1970’s ‘The Brady Bunch’ is for sale at $1.885 million. With only two bedrooms and three baths, it is a bit small for the Brady clan of two parents, six kids and their nanny, but the show’s interior scenes were actually filmed on a studio sound stage. The 1959 home has 2,477 square feet, a large lot over 12,500 square feet and lots of ’70’s touches including extensive floral wallpaper, intercom radio, rock wall fireplace and wood paneling. The show’s producers picked the home because it looked like the type of home where a middle-class family might live in Southern California.

“Elizabeth Taylor’s Favorite House”
The home where Elizabeth Taylor lived with husband #2, Michael Wilding, in the 1950s and called the most beautiful house she had ever seen is for sale at $15.9 million. Sited on over two private acres with a palm-shaded fountain entry courtyard, the 7,781-square-foot house has six bedrooms, seven baths, four fireplaces, an art studio, sauna, library, garden, and pool or city views from every room. In 1957, Liz and Michael were divorced and she soon sold the house – a few months before she married her third husband, Mike Todd.

“Zsa Zsa & Elvis Lived Here”
The ultimate in celebrity homes is for sale. The longtime home of Zsa Zsa Gabor is available at $23.45 million. The Bel Air home was built in 1955 and played major roles in both “Behind the Candelabra,” starring Michael Douglas and “Argo,” starring Ben Affleck. According to Zsa Zsa, the home was built for wealthy businessman and playboy Howard Hughes, and Elvis Presley was another former owner.  Famous house guests included Queen Elizabeth, Frank Sinatra, Ronald Reagan and Elizabeth Taylor.  The home is being offered as either a tear-down or with plans for renovation.

“Miami Luxury Condo Sales Up 54%”
Already the second fastest growing state in the U.S. with almost 1,000 new residents per day, more rich people are moving to Florida. Especially a good deal for the wealthy with its low taxes on top of recent federal tax increases that will hit states such as New York, California, Massachusetts and Connecticut,  Miami luxury condo sales over $1 million increased over 58% between May 2017 and May 2018.  Florida does not have a state income tax.

“New York City Real Estate Stalls”
With higher interests rates, sky-high prices and new tax laws limiting mortgage interest and state and local tax deductions, Manhattan real estate is in a funk. Sales are down 16.6 percent from 2017 and median sale prices down 7.5 percent to $1.1 million. Manhattan sales in the June, 2018 quarter were at their lowest point in nine years.