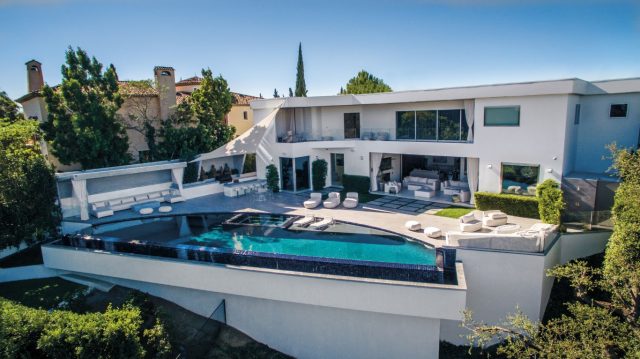 Pascal Mouawad, an internationally famous jeweler to the stars, has listed his Bel Air mansion for sale at $15.75 million. Mouawad’s fine jewelry designs have graced runways and red carpets from the Oscars to Paris Fashion Week and worn by celebrities from Elizabeth Taylor to Britney Spears. He has produced eight gemstone-encrusted Fantasy Bras for the Victoria’s Secret Runway Show, landing him in the Guinness Book of World Records for the world’s most valuable bra for his “Very Sexy Fantasy Bra” worn by Heidi Klum in 2011. He joined forces with Kim Kardashian to produce the reality star’s jewelry line, Belle Noel, and teamed up with her sisters Kendall and Kylie Jenner for their first business venture, Metal Haven, a line of teen and tween accessories. His other celebrity collaborations include Heidi Klum and Nicole Richie.