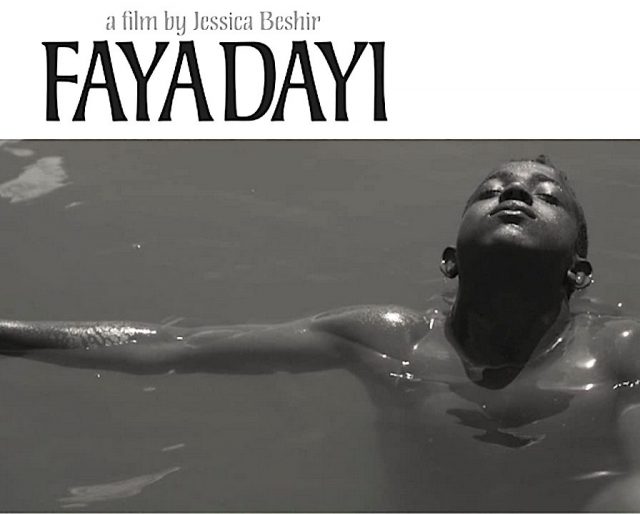 Los Angeles, CA (The Hollywood Times) 12/31/21 – Jessica Beshir’s striking feature-length debut Faya Dayi (Ethiopia, 2021) is a tone-poem shot in a rural Ethiopian town where its rural Oromo community of farmers harvest the country’s most sought-after export, the euphoria-inducing “khat” plant. Faya Dayi is a dreamlike film that uses light, texture, and sound to illuminate the spiritual lives of often-persecuted Muslim Oromo community of Eastern Ethiopia. In watching this two-hour documentary film, one seems to enter a dreamscape of visible images with powerful, symbolic resonance that feel like watching a movie “in your mind. ” The film weaves a spell with its rhythms, sometimes slow, sometimes fast, all accompanied by a vivid and haunting sound design. The overall effect is hallucinatory, akin to the “high” given by “khat,” the one cash crop in the Harar region of eastern Ethiopia. Faya Dayi has been short-listed for the Best Documentary Film Award at the upcoming 2022 Oscars. The film can be viewed online through the Laemmle Virtual Cinema webpage: https://www.laemmle.com/film/faya-dayi

Khat is Ethiopia’s biggest cash crop, making serious business from a spiritual high: When chewed, the leaves of the flowering green plant act as a stimulant, believed in certain corners of Sufism to aid prayer and enable transcendence. Others make less lofty demands of it, simply chewing the leaves to mellow out, making days of drudgery pass a little more softly – including those who work gruelingly in the khat trade. The community there once grew coffee and other lucrative crops for export, but those days are gone. Harar’s economy is now dominated by khat and its seasonal rituals: harvesting, preparing, bundling, transporting, selling it – to other regions, as well as to locals who smoke and chew the leaves, lulled into a listless altered state by khat’s psychoactive qualities.

Filmed in luminous black and white, each image more beautiful than the last, Faya Dayi is not your typical documentary. Beshir left Ethiopia as a teenager and, returning as an adult to see family, she was struck by khat’s dominance. As the cinematographer and producer, she flouts common vérité approaches in mapping out the changed community. Ritual objects and dramatic fragments – two boys bathing in the river, a scuffle over emigrating to Egypt, a madeleine-like musing on coffee – hold center stage more than bright narrative threads. The smoky texture of the images led me to think of her technique as a kind of sfumato: shading in and out of moods of presence, absence and longing.

A voice-over recalls the Sufi tale about seeking eternal life (a nod to the spiritual role of “khat”). Unifying this elliptical canvas is the sense of a contemplative search, which can also mean an escape from an altered homeland, perhaps to dull the sense of loss. The painterly black-and-white gives Faya Dayi the feeling of a memory, mournful and yet beautiful. Beshir thinks like a portrait painter, or a still-life artist: There are close-ups of hands, rusted kettles, filmy curtains swaying in the wind, casting shadows on the floor, birds in flight, children submerged in muddy river water, faces to the sky. Smoke billows in the air, the smoke of the fires underneath the khat, and Beshir holds the camera on the smoke, watching as the whorls and eddies take on a life of their own.

Faya Dayi has a slow accumulation of sensory information: Night sounds, bird calls, the cacophony of the men at the khat market, the quiet murmurings of the women in their separate world, the call-and-response songs as the khat is harvested. The night scenes are beautiful, the seemingly impenetrable darkness pierced by a swaying lantern, a misty moon, a flickering fire on the rocks. Much of this, including the voiceover, works as a distancing technique, the dreamy voices laid over all striking beauty. Some viewers may find the lack of exposition frustrating and may find the pace too slow. But Faya Dayi has more in common with a tone-poem than a “documentary.”

Beshir grew up in the walled city of Harar, but political tyranny forced her family to flee when she was a teenager. Similar upheaval has hijacked generations, and Beshir, during her visits back, noticed the rise of khat into all-encompassing prominence. Although khat is indigenous to the region, centralized in myths and fables, it is now the only game in town, the only way to make money for the people who are the oppressed Oromo minority as it is. Many of the older people are addicted to the “chew,” and lie in dark rooms, waiting for the delivery boys to arrive with the small bundles.

People’s personalities change under the influence of “khat,” as 14-year-old Mohammedknows only too well. “I heard that when people are high, they start watching films in their minds. Once you go in, you won’t find a way out.” His father does nothing except chew khat, waiting for “merkhana,” the plant’s euphoric high. Things are volatile for Mohammed. “I never know which person to expect,” he says of his dad. Older men warn the teenage boys in their midst: “Don’t start a chewing habit.” One man says wearily: “Everyone chews to get away.” The single-crop economy has entrapped everyone. Nominally cared for by his abusive, khat-addicted father, young Mohammed dreams of escaping to Saudi Arabia, where his absent mother supposedly journeyed years before. Mohammed represents a generation of young Harar natives who see no prospects in the industry that has consumed their parents, though the perils and insecurities of refugee life loom large: “Can you get a mother’s love from a stepmother? It’s the same with a country that’s not your own,” someone warns him.

Mohammed’s is just one of the individual stories in Faya Dayi. The stories are not told so much as they emerge from the visuals, the voices rising up through the fields, the river, the skies, the voices soft and intimate, like a whisper in your ear. For the most part, the voices are disconnected from faces. These disembodied voices work in an interesting way. It’s not exactly the same as a Terrence-Malick-style voiceover, but there are similarities. The stories told are often painful and specific – tales of parents, children, first loves, political strife, yearnings for a better life – but the voices whisper their truths like a collective prayer. The eloquence is often startling: “Fertile land. Country of honey dew,” says a man, squatting over a pile of khat leaves, his hands busily plucking the sharply pointed leaves off the stalk. “Yet every regime has kept us from working our own fertile land.”

The political aspect of this world, the longstanding struggle of the Oromo people with the various Ethiopian regimes, doesn’t make its explicit appearance until an hour in, when a group of young men sit in a field, dry leaves crackling around them in the wind, talking about their experiences being imprisoned, beaten, tortured. One says, “Our struggle is not new.” This gives heft and weight to what we have seen, a world where time seems to have either slowed down. Beshir’s intermittent use of slo-mo is extremely effective, adding to the trance-like quality. After a lingering shot of two completely veiled women walking on a dirt road, their robes billowing around them in the wind, evocative of the timelessness of this world and this place, Beshir cuts quickly to a shot of stone buildings whizzing by in a blur. After this jolting change-up from stasis to movement, a male voice says, “I remember in 2015 young people joined the peaceful protests.” Even without the explanatory language, Beshir’s careful juxtaposition of images tells the story. Faya Dayi works kinesthetically. You can hear images. You can feel sound.

“Everyone chews to get away,” Mohammed observes morosely, determined to get away by other means. There’s a more grittily anthropological documentary to be made about a population under the leaf’s spell, though Faya Dayi is more concerned with microcosmic tableaux, an approach well-served by Beshir’s knack for stunning image-making: Incidental everyday shot, whether of a tree of birds huddling in the breeze or two boys patiently daubing over a new wattle hut, are absorbed into the film’s mesmeric evocation of pained lives slowed to a bearable pace. Amid such scenes, a mystical running voiceover details local lore concerning the quest for eternal life, sounding as far removed as can be from the reality of Harar: It’s not immortality that Mohammed seeks, merely a future.