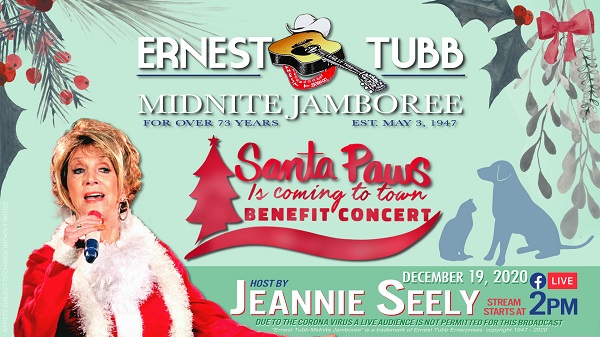 NASHVILLE, Tenn. (Dec. 10, 2020) — Grammy winning artist Jeannie Seely, with featured guest Tim Atwood, will host the second annual Santa Paws is Coming To Town benefit performance on December 19 on the historical Ernest Tubb Midnite Jamboree at the Texas Troubadour Theatre in Nashville. Guest performances will include Allie Colleen, Michele Capps and Anita Stapleton and several special guests to be announced. The all-star band includes Dug Grieves, Danny Davis, Kenny Sears, Eddie Bayers, Eddie Dunlap and Mike Nobel. The show will be taped live for fans to watch during a live-stream at 2 p.m. CT on the Ernest Tubb Record Shop Facebook page at ernesttubbrecordshops and/or listen to a radio broadcast at midnight on WSM 650 Radio and online here.

Fans are asked to bring food, blankets, animal beds, puppy pads, cat litter, cleaning supplies, pet toys, treats and more to benefit the dogs and cats who find themselves in Nashville animal shelters at the start of a new year. The donations can be dropped off at the Texas Troubadour Theatre 2416 Music Valley Drive Nashville starting December 12 through December 20 from 10am to 5pm CT.

“The response we got last year was so positive, I just knew we had to make this an annual event!! At this time of year we seem to be more aware of those in need in our community and I felt like this was one area being overlooked,” exclaimed Jeannie Seely! “Not only do these wonderful little animals need and deserve attention, so do the wonderful people who care for them! They work so hard and it’s more difficult when you don’t have what you need to work with. It was so rewarding to see their excitement to not only receive the supplies but to know we all appreciate them!”

Tim Atwood shared, “I know these shelters work hard to find forever homes for these animals, and we want these dogs and cats to be comfortable until that day comes. Our dog Jazz came from a shelter. Every time he looks at us, we see unconditional love. Jazz is family.”

Jeannie Seely celebrated 53 years as a member of the Grand Ole Opry on Sept 16, 2020. Her current album, An American Classic, was released by Curb Records and produced by Don Cusic. The album includes collaborations with Bill Anderson, Rhonda Vincent, Steve Wariner, Lorrie Morgan, The Whites, Vince Gill and more. The project includes her duet with Willie Nelson, “Not A Dry Eye In The House”, was released as a single on her 80th birthday, July 6, 2020. She was honored by Lincoln Memorial University during its Fall Commencement exercises on December 14, 2019 in Tex Turner Arena where she received an honorary Doctor of Arts degree. June 21, 2019 Ms. Jeannie Seely, was honored and recognized for her contributions to the entertainment industry by the Donelson-Hermitage Chamber of Commerce Women in Business. Announced by country music icon and friend, Willie Nelson, The Standing Ovation Award was presented to Ms. Seely at the inaugural Influencing Women Awards Gala.

Country music legend Jeannie Seely has achieved chart topping songs as a solo artist, as a duet partner, and as a songwriter. From her 1966 Top 10 Billboard album “The Seely Style” to her most recent self–produced album, “Written In Song,” a CD project with 14 tracks all co-written or self-penned by Seely and recorded by Country Music Hall of Famers and Country music legends; Ernest Tubb, Dottie West, Willie Nelson, Merle Haggard, Faron Young, Jack Greene, Little Jimmy Dickens, Chris LeDoux, Ray Price and more. Jeannie’s recordings have spanned six decades and provided enjoyment to country music fans all around the world. Many of the songs were recorded by Hall of Fame members. Jeannie earned a Grammy for her recording of “Don’t Touch Me” in 1967. Seely is a weekly on-air host on SiriusXM Willie’s Roadhouse, where she shares personal memories and fun stories about the songs she spins. 2018 Seely was honored to receive recognition and a star on the famed Music City Walk of Fame and recognized for ranking #2 in Billboard’s Top TV Songs Chart for January 2018 for her song “Anyone Who Knows What Love Is (Will Understand),” written in 1964 and recorded by Irma Thomas. The song is the trailer theme song for new Jurassic World: Fallen Kingdom, many acclaimed music artists recorded their own versions, including Seal and Boyz II Men and it has been featured in numerous episodes of the science fiction anthology Netflix television series Black Mirror.

Early in her career, Jeannie’s deeply moving vocals earned her the nickname of “Miss Country Soul”– a title that’s still used today. Jeannie’s biggest dream came true when she was inducted as a member of the world-famous Grand Ole Opry, becoming the first Pennsylvania native to do so. A country music legend and trailblazer, her perseverance over many years earned Seely the honor of being the first female to regularly host segments of the weekly Opry and is credited for changing the image of Opry by being the first to wear a mini-skirt on the Opry stage. Jeannie works tirelessly behind the scenes in the music industry on behalf of fellow artists and musicians. Known for her quick wit and humor, she documented some of her “sayings” in her book, Pieces Of A Puzzled Mind, which is a unique collection of witticisms. Jeannie Seely has also starred in several major stage productions. In his 2003 book “Finding Her Voice: Women In Country Music,” music critic Robert K. Oermann wrote, “With her chin-out, tough/ tender, heart-of-gold manner, Jeannie Seely remains one of Country music’s most completely modern female personalities,” and that statement still holds true.

About The Ernest Tubb Midnite Jamboree:
The Ernest Tubb Midnite Jamboree is country music’s second longest running radio show. The WSM Radio broadcast has followed the Grand Ole Opry for 73 years. The show was originally started by Grand Ole Opry and Country Music Hall of Fame inductee Ernest Tubb in 1947 with the idea of a laid back show where fans could meet their favorite stars and discover newcomers on the scene, while sharing access to all of their recorded music inside the Ernest Tubb Record Shop. The Midnite Jamboree was Loretta Lynn’s first Nashville stage and everyone from Elvis Presley, Kitty Wells, Randy Travis, Garth Brooks and numerous stars have performed on the legendary live radio show.