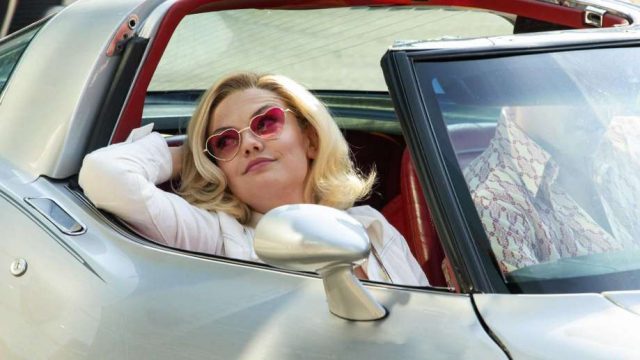 The year 2017 was a time of turmoil for women, beginning with efforts to slash Planned Parenthood and other benefits, and ending with a tsunami of reports of sexual harassment that became known as the #metoo movement. By contrast, 2018 saw the exuberant rise of the feminine profile, both in realms of politics and entertainment.

Television was a prime example, reflecting this upsurge with many more women and other marginalized groups soaring in prime time behind the camera and in front of it.

It was a year marked by diverse leads and breakthrough plotlines showing not only women, but people of color and from the LGBTQ community, as warriors of a sort, railing against oppressive norms and forces.

Maybe most representative of change was a TV first: An actress — Jodie Whittaker — was cast as the lead in “Doctor Who,” a series that only featured men as the time-traveling hero since the show’s debut in 1963.

That’s not to say, of course, that this year’s television only brought us revolutionary stories. Among top offerings were a farcical look at money and power and a fanciful, feel-good series about a lodge and a surfer.

The most dramatic transformation involved Candy (Maggie Gyllenhaal), who went from walking the streets and performing in sex films to directing her own adult feature inspired by “Little Red Riding Hood.” Another former hooker fled the life to reinvent herself as a Gloria Steinem lookalike, who helped push for prostitutes’ rights. The most poignant story line, however, could be titled “The Ballad of Lori and CC.” It chronicled the former’s rise from streetwalker to major porn star. This led to her gradual extrication from the grip of domineering and downright scary pimp CC (Gary Carr). Luminous Emily Meade touches the heart as Lori, a young woman who feels both frightened and relieved by her new freedom. (HBO)

9. “Vida”: This unusual half-hour dramedy about two sisters from a fractured Latina family who try to reclaim their East L.A. neighborhood is scrappy, moving, funny and very sexy. It’s also, as “Vida’s” showrunner Tanya Saracho put it, a rare look at life from the “female, brown, queer perspective.”

Both Hernandez siblings struggle with their sexuality. The younger one, Lyn (Michelle Barrera), is straight and emotionally available, but her reliance on her looks and dependence on men has left her feeling aimless and empty. By contrast, Emma (Mishel Prada) has built a successful business career. However, the openly gay woman has avoided the emotional part of relationships, preventing anyone from getting close to her. The series also explores racism, gentrification and other issues and is strengthened by the leads’ magnetic portrayals. (Starz)

8. “Succession”: This one wasn’t an easy sell. Don’t we already get enough real-life drama involving a wealthy, privileged family headed by an egotistical patriarch? However, the fictional Roy family is such an entertaining trainwreck that it was impossible not to keep watching once you’d started.

Here, the prize everyone wants a piece of is the multibillion-dollar media empire built and run by Logan Roy (Brian Cox), a character thought to be loosely based on Rupert Murdoch. When Logan suffers a stroke, the company seems to be up for grabs, and the infighting that happens among his four adult children is at once ugly and comical. Their bearish dad, however, isn’t about to slow down and certainly isn’t above throwing his progeny — particularly power-hungry second oldest son Kendall (Jeremy Strong) — under the bus. The delicious cast — including Kieran Culkin as the youngest son and chief jerk, whose utter tastelessness is so amusing you don’t know whether to punch or applaud him — made every moment count, leaving us salivating for the already green-lit second season. (HBO)

7. “A Very English Scandal”: It’s a huge kick watching former rom-com favorite Hugh Grant play a potty-mouthed “old queen,” as he calls himself in this wonderfully entertaining, multi-hour true-crime romp. By day, he’s a closeted politician, namely real-life member of Parliament Jeremy Thorpe. To keep his position, he hides his after-hours sexual assignations from his constituents. Because of this secrecy, however, he is often the victim of thieving, violent types.

Much to his joy — and eventual chagrin — Thorpe meets sweet, vulnerable Norman Scott, played charmingly by Ben Whishaw (“Q” of the current James Bond movies). All Norman asks is for Thorpe to pay for his meds, which — alas! — he fails to do. This eventually leads to Norman squealing to the cops and the press — thus, the “scandal” of the title — and a plan by Thorpe to silence him through nothing less than murder. Oh my! But don’t worry, it’s all a bunch of bumbling fun. What you can count on are more laughs than are delivered by most sitcoms. (Amazon)

6. “Lodge 49”: Think you’ve experienced everything TV has to offer? Prove yourself wrong by dipping into this new hour that defies description. Its story thread, including a puzzle referred to throughout, is fairly nonsensical. A better way to enjoy and appreciate it is to abandon logic and let the show’s magic — oddball characters, hallucinatory images, quirky humor and cozy camaraderie — wash over you like a welcoming wave.

That comparison is apropos, as “Lodge” takes place in a California beach town and revolves around a sweet, aimless ex-surfer named Dud. After losing his dad mysteriously and having his foot maimed by a snake, he forsakes the sea sport for a land-based preoccupation: a local haven rich in its own history, Lodge 49. Young Dud infuses it with new energy by embracing the place with childlike wonder. Playing him with verve and contagious optimism is an appealing newcomer: Wyatt Russell, son of Kurt and Goldie. He makes Dud a joy to hang with, and Sonya Cassidy does the same with her portrayal of flinty, yet endearing, sis Liz. (AMC)

5. “Homecoming”: Producer, director and master of paranoia Sam Esmail of “Mr. Robot” fame borrowed from one of the best behind the camera — Hitchcock — for this slow-burn of a suspense thriller. He also landed an Oscar winner for a star, Julia Roberts, who turns in a truly haunting performance in her first TV series lead.

Adapted from a popular podcast, the 10 half-hours follow Heidi Bergman, a caseworker hired to help soldiers back from war reintegrate into civilian society. But is that the real motive of this “therapy” program run by industrial giant Geist, or are the people involved, such as Homecoming’s tyrannical boss (Bobby Cannavale), engaging in sinister activity to achieve a more profitable result? Esmail’s chilling use of an ominous soundtrack, overhead camera shots and long one-takes of Heidi walking up and down stairs in the facility call to mind a rat maze in a science lab that is constantly being monitored. (Amazon)

4. “Patrick Melrose”: This depiction of the long-lasting damage of parental abuse, which is based on the best-selling novels by Edward St. Aubyn, is unflinchingly powerful. In the title role, “Sherlock” star Benedict Cumberbatch delivered a tour-de-force. Reliving his nightmarish childhood over and over, the adult Patrick takes us on a terrifying, albeit fascinating, ride. He wails with anguish, crawls along the floor like an ill animal and, during heroin-induced hallucinations, converses with invisible companions.

Amid the darkness, however, glints of light and humor prevail. Thanks to the sparkling wit of St. Aubyn’s writing, as well as scenes showing Patrick being a gentle dad to his own kids, we’re uplifted by the knowledge that recovery is indeed possible. (Showtime).

3. “Sharp Objects”: It took a little time to wrap my head and emotions around what’s happening in this melancholy and marvelously textured adaptation of Gillian Flynn’s contemporary Southern Gothic thriller. Once hooked, however, the unusual eight-part series, directed by Jean-Marc Vallée of “Big Little Lies,” mesmerized week after week with horrific new layers, in the present and in flashbacks.

Self-destructive journalist Camille Preaker returns to her hometown in Missouri to investigate gruesome serial killings of young girls. While doing so, she is hit with memories of her own disturbingly bleak childhood, the most glaring reminder being her cold, and as we soon learn, dangerous mother. Amy Adams turns in her most natural performance to date, adeptly bringing each heartbreaking nuance of Camille to the screen. Patricia Clarkson, too, is every inch the quietly manipulative Southern belle, who with a word or two, can turn her daughter inside out. (HBO)

2. “Pose”: What better tonic for a divisive world than this latest entry from Ryan Murphy, a drama about love, inclusion and acceptance. Making it all the more remarkable is the abundance of transgender talents hired as writers and cast regulars.

On the surface, “Pose” is incredibly glamorous. Set in New York City in the 1980s, it focuses on the ball culture of that era, which provided a stage for trans and gay people of color to strut their most outrageous and glittery looks in front of a sometimes appreciative, sometimes jeering audience. The heart, however, is provided by the real people beneath the pomp and costuming. Stripped bare, the series is about home and family. These houses, formed by surrogate moms, such as the warm, protective Blanca, provide LGBTQ outcasts a safe place to live while they pursue creative paths.

The show is packed with bravura performances, but standouts include MJ Rodriguez as the tender Blanca, Indya Moore as “daughter” Angel, who falls in love with a married businessman (Evan Peters), and Dominique Jackson as Elektra Abundance, the fiercest and most mocking of moms. (FX)

1. “Killing Eve”: This provocative cat-and-mouse crime tale from Phoebe Waller-Bridge (“Fleabag”) is so packed with surprises and creative mayhem, you may find yourself feeling almost as giddy as this show’s electrifying murderer. The twist here is that both the killer and main investigator are women. As such, their interactions with each other are less of the rough, tough, testosterone variety and more cerebral, marked by curiosity, psychological digging, even flirtation.

The assassin begins stalking her pursuer, showering Eve with seductive gifts of designer clothes and perfume, eventually confronting her in a very personal, yet frightening way. Although they never abandon their respective goals, the two eventually become so entranced by one another that you wonder if they actually want to put an end to the chase. Sandra Oh is marvelous as the complicated M.I.5 detective, but none of this would work as beautifully without sensational British actress Jodie Comer as a very stylish hit woman gone rogue. (BBC America).

Jeanne Jakle is a freelance writer in San Antonio.