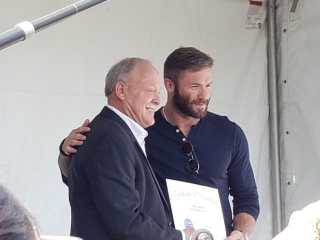 Fountain Valley, CA (The Hollywood Times) 4/3/19 – That is Julian Edelman for United Sports Brands.  Based in Fountain Valley, California, this relatively small player in the sports and fitness gear business thrives on the quality of its products, including a few that have been worn and endorsed by professional athletes.  Their biggest partner to date is a relationship that has been going on for a number of years, according to PR liaison Eli Miller.  Throughout much of his career, this year’s Superbowl MVP Julian Edelman of the New England Patriots has been wearing receiving gloves designed by one of USB’s sub-brands Cutters that manufactures these gloves.  Now Edelman has begun a partnership where he designs some of the gloves worn by players around the NFL as well as wearing them himself.

So in celebration of that, United Sports Brands invited Edelman to their commercial-park-office location in Fountain Valley.  This marketing gimmick, wrapped up in a publicity stunt, packaged as a chance for the public to see a Superbowl MVP in-person drew a crowd of a few hundred Patriots fans, football fans, and those who just want to see a celebrity up close to the parking lot of USB for some fun, a few words of advice and a fun Q&A.  CEO Michael Magerman emceed the event which included a city official of Fountain Valley who saw fit to give a ‘welcome to the city’ type award to Edelman who accepted it with class.

But the bulk of the ceremony involved the NFL Veteran offering advice and sharing his thoughts and opinions on questions asked by the young fans in attendance.  Favorite teammate: Matthew Slater (Offensive Lineman for the Patriots).  Favorite wide receivers to watch when not playing against them:  Antonio Brown, Odell Beckham Jr (or OBJ as he’s known to NFL fans everywhere).  Favorite team growing up…..”NOT the Rams”.  This drew the loudest and most mixed reaction of the afternoon.  Edelman then explained having grown up in the Bay area that he grew up watching the 49ers.  Hence, his lack of love for the hometown team whose city he was visiting.  Edelman noted with emphasis the many sacrifices and hard work he put in to reach the pinnacle of his career with the Superbowl MVP trophy he won this past February.  It was that message above all that he wanted to impress upon the predominantly young crowd in front of him.

Thus a day of celebration for Julian Edelman turned into a great opportunity for one of the faces of the NFL to give back to fans of the game and inspire them to their own future success.