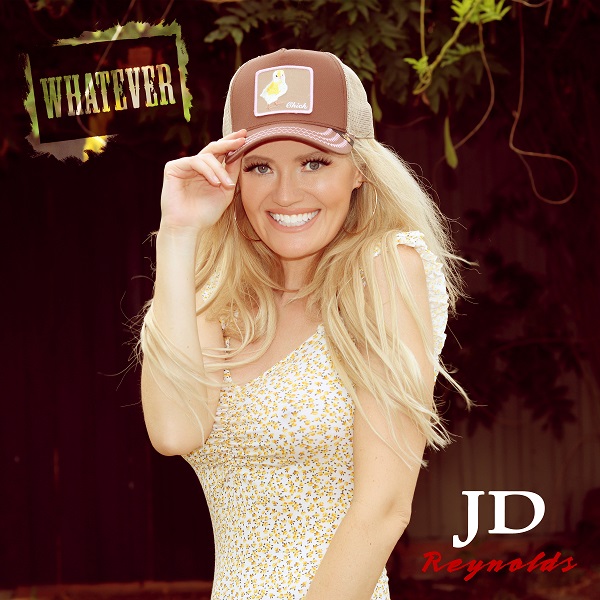 “WHATEVER” was Premiered on Country Rebel

“Look out Country Music Video World…JD Reynolds has left her mark! WHATEVER…Just in time for going back out on the town. Outtakes…worth the wait.” – Judy Shields, The Hollywood Times

“JD Reynolds released her unapologetic, vivacious single “WHATEVER,” which is filled with a lot of sass and attitude. The listener can recall Shania Twain meets Gretchen Wilson.” – Markos Papadatos, Digital Journal

“JD Reynolds lays it on the line with a ‘no muss no fuss‘ performance in her new video for “Whatever”!” – Guitar Girl Magazine

NASHVILLE, Tenn. – Country singer/songwriter JD Reynolds sets the scene for a carefree, feel-good summer with the release of her music video for “WHATEVER“. The music video features Reynolds and her girl gang headed for a night out, enjoying each other’s company because it’s simply all they need. The classic country storyline turns dynamic and powerful with pop/rock influence, making it the perfect tune to add to every girls-night-out playlist. The music video depicts Reynold’s upbeat attitude and confidence for a stress-free night, unbothered by any country-boy temptation present at the bar. “WHATEVER” signifies that the only approval needed is your own! The lyrics come alive in this music video through creative excellence and a heart of gold, making you want to get up and dance with every word! “WHATEVER” was exclusively premiered by Country Rebel and is available to download and stream on all digital services now.

Visit HERE to watch the “WHATEVER” music video on Country Rebel.

With an important emphasis on independence and genuine friendship, “WHATEVER” is a reminder that we all deserve to let our hair down and dance it out with the ones who love us most. This high-energy music video is filled with nothing but positive vibes, allowing listeners to let loose, make memories, and experience the thrill of freedom during nights of endless fun without the drama. With sparkling women’s intuition, “WHATEVER” proves that no matter who’s around, you can never go wrong by sticking with the ladies and leaving all worries behind. Fans will not want to miss this energetic music video from country standout JD Reynolds. This is only the beginning for the rising star!

To keep up with future events and everything JD Reynolds, follow the social channels linked below.

A true singer, a real songwriter, a neoteric producer, an incredible dancer, and striking performer, all wrapped up in a stunning package that could grace the cover of any magazine in the world, and yet, her down to earth country girl charm is what makes this extraordinary artist so real. JD’s sound is fresh originality for country music. “My entire album came to me like a bolt of lightning, the JD sound, my sound, respecting country music roots yet having my own next level twist”. As an up and coming producer, JD teamed up with seasoned producer Braddon Williams to co-produce what country music insiders have nicknamed “The Jagged Little Pill of the Country”. Braddon has achieved more than thirty top-ten hits, amassed over thirty times platinum in record sales, and his work has received both Grammy and ARIA award nominations, credits include Beyoncé, Snoop Dogg, P Diddy, The Script, Kelly Clarkson, and his latest favorite, JD Reynolds!