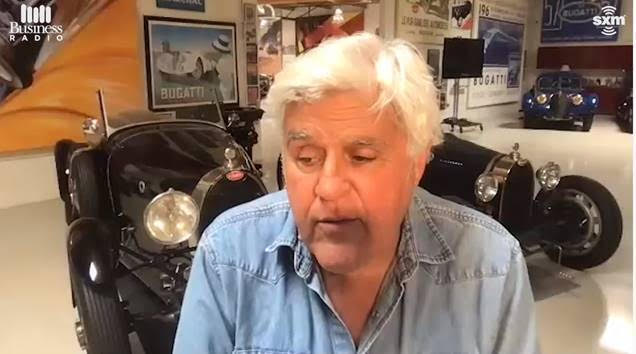 Jay Leno on Being Inducted into the Automotive Hall of Fame: https://youtu.be/-NGrjqXVvSs

Host, Jason Stein: What does the Automotive Hall of Fame mean to you, Jay?

Jay Leno: Well, it’s kind of cool because when you’re in TV, it’s like the network will say, ‘we’re going to nominate you for an Emmy, and then we’ll be sort of pushing it on various websites, we’ll be contact.’ So it’s one of those things it’s part of the business and people try to get it. You sort of run for it almost, you know? I mean, some people do, some people don’t, but to a certain extent, you’re kind of doing it all. This just came out of the blue. It’s like, ‘oh, well, thank you.’ I mean, somebody thought maybe this might be a good idea, probably because of “Jay Leno’s Garage” because we feature so many different guys, not just Lamborghini’s and supercars and things like that. It’s just all types of transportation from steam wagons to s-turbine. So it’s more the history of transportation and the engineers and the men and women behind it. So I think it probably has more to do with that than anything else.

Host, Jason Stein: Well, yeah I mean, you certainly didn’t run for it. I know you’re a student of automotive history hugely, but what was your reaction? I mean, when the phone call came in?

Jay Leno: I was really honored by it. I thought ‘oh, well that’s pretty cool’ because to me, just coming from New England there a certain, a guy who runs is better than the guy who walks, a guy who walks is better than the guy who drives, and the guy who works with his hands is better than the guy who just sits and types in a computer all day. I mean, probably doesn’t get paid as much, but there’s something more real about it. And to me as a kid, I always admired the man and to a certain extent, women too, who could fix things with their hands and work with their hands. I mean, I always believed the hardest healthiest were when the head and the hands work together. If that makes any sense at all. You know, I tell jokes at night, and then during the day, I like to come to the garage and work on stuff because when you work on things, it gives you a perspective of how hard it is to make money. When you only get paid 80 bucks to take a transmission out, and your hands are all cut and you’re covered with grease and smell like transmission it’s like ‘Oh, that’s a hard 80 bucks to earn’ as opposed to just standing on the stage and talking and people throw dollars at you, which is just excellent too. Please don’t get me wrong, I love that, but it does make you appreciate it. I always hear friends in show business, say ‘I got off at this. I’m not going there for this kind of money.’ I go, ‘what are you doing on a Tuesday that’s worth that kind of money?’ You need to look at things from a normal perspective. And comedy is only funny when it comes from an every man point of view. So when you work with your hands and you do mechanical things, you just appreciate the every man point of view.

Jay Leno: That’s the fun thing about this hobby. If you’re studying the pyramids while everything is 5,000 years old, and the chances of you finding any actual artifacts, a piece of history are pretty slim, unless you have just ways and means beyond the average person. But automobile, the history is really no more than maybe 150 years old and that’s probably stretching it as well. I mean, it really starts from the early 1900s. So when you go to King’s Bookstore in downtown Detroit, here’s a book for $5 written in 1906 on the history of the automobile. Oh, this is pretty cool so that’s what I like about it. The history is not that old, and you can learn a lot about it. Dr. Joyce Brothers, she got famous because she was on ‘The $64,000 Question.’ That was a quiz show that was popular back in the day, and you had to have a topic. So she picked boxing, even though she knew nothing about boxing, but she knew it was only from about Jack Johnson to now, and you only had to memorize about a hundred names. And so she studied all those and she won ‘The $64,000 Question.’ And that’s what’s kind of fun about it, it all sort of takes place, at least for America in and around Detroit, Indianapolis and you can actually walk down the same streets that Henry Ford drove down and see a lot of the same factories, a lot of the same buildings that have been converted. I mean, Connors Avenue just is gone now, I guess where the Packard [Automotive Plant] Factory but Woodward Avenue is still there and there’s still the old guys who are now my age can tell you about racing with GTOs and Corvette. I find when you first get interested in cars, you like the fast cars of today, and then you go, ‘well, what came before this?’ So that was the muscle car of the sixties. ‘Well, what came before that?’ Well, it was the big, powerful muscle cars of the fifties, the Chrysler 300s with the 392 hemi and all that. ‘Well, what came before that?’ The Buick Straight-8 with the overhead valves. And before that you had steam and electric. And so it’s fun to keep going back and see what came before whatever it is you like.

Jay Leno: It’s rather eclectic. There’s no rhyme or reason to it. It’s anything that rolls and explodes and makes noise. I never really get one make collections where guys just have 64 to 66 Mustang and that’s all they have. I mean, to me, the fun part is seeing the difference between. All automobiles now have the sameness to them. They got park, R, D, and neutral, whereas the old days you had the push button transmission, you had just all kinds of odd ball, semi clutch things, record players. I’ve got a Nash Airflyte and you stop it by taking the shifter and pulling it towards three-on-the-tree and pulling it towards you, and that’s how you start the car. But anybody trying to steal this would have no idea how to start this car so that sort of makes it fun.

Jay Leno on Breaking Records in his Tesla: https://youtu.be/eXy4Yf4GQHg

Host, Jason Stein: Yeah, you just set a record with that. I mean, you were recorded setting a world record.

Jay Leno: That thing is unbelievable. I mean, we did one pair. I went to Famoso dragstrip in Bakersfield..drove to the strip, lined up under the lights, air conditioner on, four-door, nail at light change, green go, and we did 9.247 and 152 miles an hour. I mean, it is the fastest accelerating vehicle you can buy now.

Jay Leno: Yeah, and Rimac, they’re building a car, but there’s is 1.8 million or something. And I’m not even sure if it’s certified yet, but for now the Tesla Plaid. There’s no maintenance, it’s pretty bulletproof, you got just about a 400 mile range. It’s a pretty amazing vehicle. I’m stunned at how good it is.